(Minghui.org) Falun Gong practitioners from California’s Bay Area participated in the annual Autumn Moon Festival in San Francisco's Chinatown on September 7-8, 2019. They set up a booth, as they had in previous years, to promote the benefits of the meditation system to the community.

The Mid-Autumn Festival, also known as the Moon Festival, occurs on August 15th of the Chinese Lunar Calendar each year, which this year falls on September 13. As one of the most celebrated holidays in China, it emphasizes family reunion and happiness. 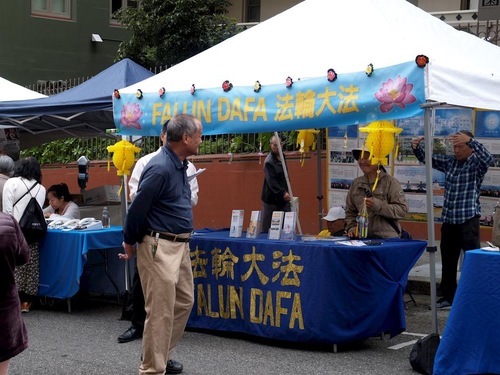 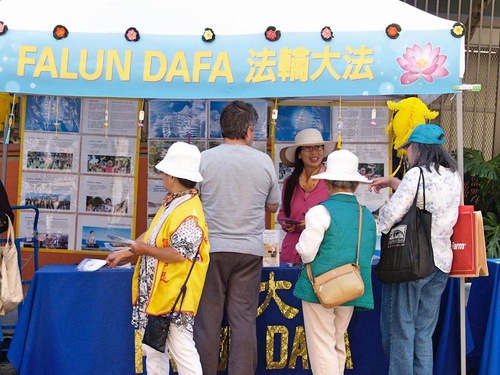 Falun Gong practitioners tell people about the practice at the Autumn Moon Festival in San Francisco's Chinatown on September 7-8, 2019.

Passersby: Thank You for Your Efforts

Frank from Alameda on the eastern side of the San Francisco Bay stopped to greet the practitioners. He said that he had heard about Falun Gong many years ago and also read some materials. He said, “This practice tells people to be better persons. It’s too bad that the Chinese Communist Party (CCP) has been persecuting it and even killed practitioners for their organs.” He thanked practitioners for continuing their peaceful efforts in resisting the 20-year-long persecution.

Catherine lives in Russian Hill, an affluent residential area in the city. She said she knows that practitioners are horribly mistreated in China for their belief and hopes the situation will change. She praised the practitioners for holding all of their marches, street fairs, and other activities that raise awareness of the human rights violations in China.

Another passerby, Cynthia, listened quietly for a while and then asked why such a meditation practice would be persecuted. She was born in Hong Kong and grew up in the United States, so she was curious what was happening in China.

A practitioner told her that the CCP had suppressed Chinese people during various political campaigns in the past. “Moreover, the CCP promotes violence and hate propaganda, which run contrary to the principles of Truthfulness-Compassion-Forbearance of Falun Gong,” the practitioner explained. Intrigued by Falun Gong, Cynthia said she would visit the FalunDafa.org website. She took some materials from the practitioner to read at home. 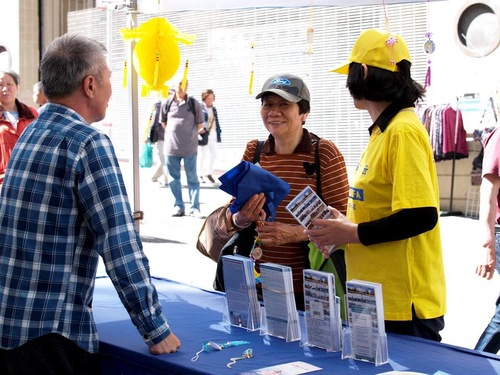 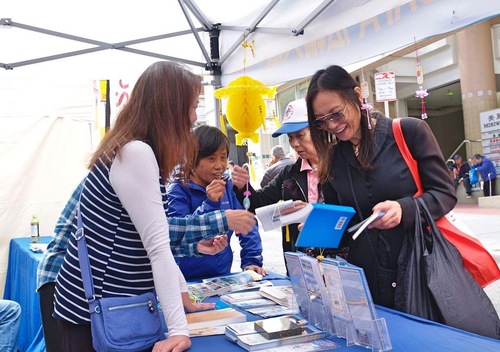 People stop to talk with practitioners.

Through consistent efforts by practitioners over the past few years, many Chinatown residents and visiting Chinese tourists have stopped believing the CCP's defamatory propaganda about Falun Gong. One resident, originally from Guangdong Province, told a practitioner, “I already quit the CCP organizations several months ago here at your booth. If you have any materials, please give me some. I always enjoy reading them.” She told the practitioners that she keeps a handmade lotus flower that a Falun Gong practitioner gave her on her window at home.

Another passerby, Ms. Xu from Southeast Asia, stopped at the booth and talked with the practitioners. She said she had seen practitioners in parades many times and likes the practice very much. “The CCP is bad—rotten to the core,” she exclaimed, “We all support you practitioners.” 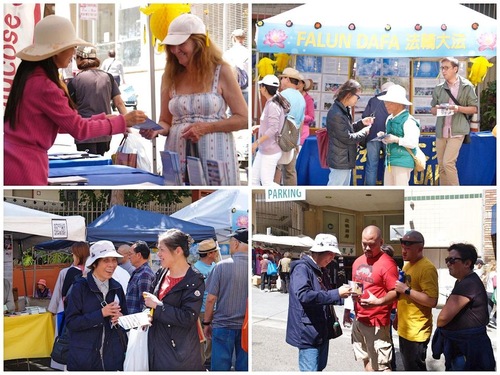 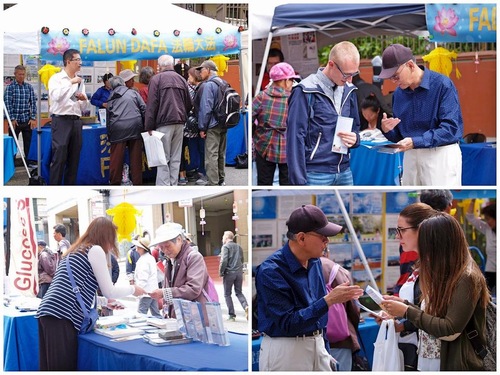 Local residents and tourist learn more about the Falun Gong meditation and its persecution in China.