Australians Express Admiration for Practitioners' Steadfast Efforts to End The Persecution: “Many People Stand with You”

(Minghui.org) Falun Dafa practitioners set up a display in downtown Hornsby, a suburb of Sydney on July 27, 2019 to tell people about the practice and raise awareness of the persecution in China. Local residents expressed their support and admiration for practitioners' efforts to end the atrocities. 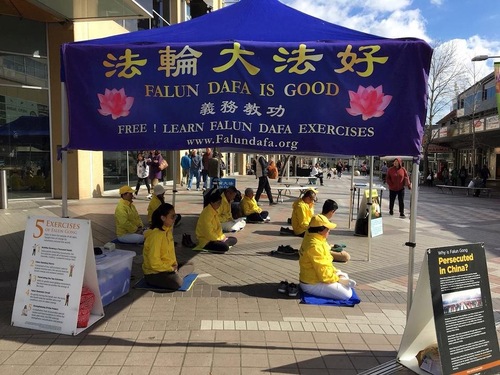 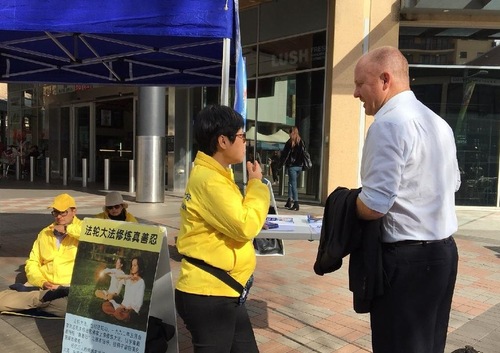 Practitioners talk to people about Falun Dafa in downtown Hornsby on July 27, 2019.

Many people were drawn by the calming music used in the exercise demonstration and stopped by the practitioners' display to learn more about the practice. Several signed the petition calling for an end to the Chinese regime's brutal persecution of Falun Gong. Many people from China agreed to quit their membership in the Chinese Communist Party (CCP) and its affiliated organizations.

“Many People Support You”

A Chinese man who said he was a Christian was very touched by the practitioners. He wanted to give them a donation. They politely declined his offer. He said, “You are not alone. We support you. Many people support you and stand by your side.” He told practitioners he had already renounced his membership in the CCP.

Another Chinese man in his 60s took information about Falun Dafa. His wife agreed to quit her membership in the Communist Youth League after she learned the facts about the persecution.

Catherine Burnse who works in Sydney's child protection center, stopped by the practitioners' booth and signed the petition against the persecution. She told practitioners that when she went Beijing 6 years ago she saw a woman who was a Falun Dafa practitioner being beaten up. She feels that no one should have to live in such fear.

She said, “I'm glad that you're telling people about this. More people should know the truth. I know you are good people and I hope to learn more about Falun Dafa. I will tell my family what's happening in China.”

Many Westerners signed the petition that day to stop the persecution. A man said he saw a documentary on forced organ harvesting. He thinks the CCP should stop torturing and detaining Falun Gong practitioners.

An Australian man who works with a local service club invited practitioners to introduce Falun Dafa to his club members.

“Eight Guangzhou Residents, Including Six in Their 70s and 80s, Arrested for Their Faith in Two Days”