Taiwan: Volunteers of Local Study Groups Share How They Help Everyone Improve As One Body

(Minghui.org) Two hundred Falun Dafa (also called Falun Gong) volunteers from throughout Taiwan gathered at the Chientan Youth Activity Center on July 27 and 28, 2019 to study the Dafa books together. They shared their experiences on how to better lead other practitioners in their area to study the Fa, cultivate their xinxing, and let go of attachments. They also wanted to help their local practitioners cooperate better when clarifying the truth about Dafa. 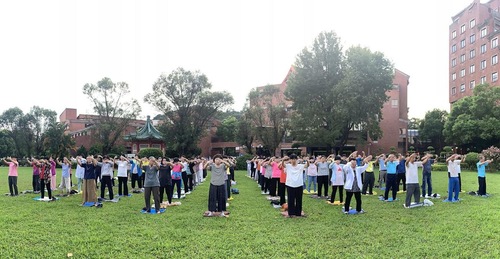 Volunteers from local Fa-study groups in Taiwan exercise together in the morning on July 17, 2019, at the Chientan Youth Activity Center.

Cultivating Oneself to Better Help the Group

Jianqing shared that to validate the Fa, he needed to cultivate himself well. He frequently reminded himself to follow the requirements of a Dafa practitioner. He has been in the military for over 30 years and often acted in a domineering way and offended others in the past.

After he learned Dafa, he gave careful thought to how to act around his subordinates. He treated them kindly and taught them patiently when they made mistakes. His subordinates saw his changes. “Before, they wanted me to take leave every day. Now they want me to stay in the unit and be with them every day,” Jianqing smiled as he told his story.

Jianqing thought that his duty as a volunteer was to create a better environment for cultivation and help local practitioners cooperate. He recently discovered literature that was very helpful for people in Taiwan to see the evil nature of the Chinese Communist Party (CCP). He often talked to the local practitioners and encouraged them to use their connections to disseminate the material. With his taking the lead, more practitioners became involved in this task.

Memorizing And Becoming Part of the Fa

Rui’e hit a bottleneck five years after she started practicing Falun Dafa, and she wasn’t able to improve. To make a breakthrough, she began to memorize Zhuan Falun, which took over 200 days. She said it helped her better understand Master Li’s other lectures.

At the same time, she understood the importance of clarifying the truth face to face, and she started a truth-clarification presence at a tourist attraction. She said she had the confidence to run the location because she was acting based on the Fa. She also mobilized local practitioners to help with truth-clarification. It has been five years since she started this site, and everything still goes well.

Rui’e then motivated other practitioners to memorize the Fa because she believed that it was the best way to help practitioners improve. They memorized the Fa together and encouraged each other. Over the past four and a half years, they memorized three of Master’s books. She enlightened that all the abilities practitioners have in clarifying the truth, passing tests, eliminating evil, and saving people come from the Fa.

Su Cheng began to practice Falun Gong when he was a senior in college. He finished reading Zhuan Falun within two days. He recalled that all the questions he had in life were answered by the book. He gradually understood that studying the Fa well enabled him to judge things based on righteous thoughts. When he was in graduate school, he finished his schoolwork with great efficiency and had more time to cultivate and clarify the truth. He was in charge of the Falun Dafa Club at the school, and his righteous thoughts helped him ignore others’ negative input and successfully promote and expand the club.

Su Cheng realized that looking at problems based on the Fa prevented him from being influenced by negative thoughts and restricted by notions. As a volunteer to coordinate local practitioners, he tried not to judge them or be swayed by others’ opinions and notions. He treated practitioners and the work he did based on Fa principles. He believed that it was the best for the group to use righteous thoughts to deal with everything.

Biling’s husband recently brought his overseas business back to Taiwan and moved back home. The free lifestyle she was used to for years was then restricted by her husband. He wouldn’t allow her to go out to exercise with other practitioners. She realized that she needed to balance her family relationships and make her husband understand Dafa.

She wasn’t allowed to use an alarm in the morning because her husband was a light sleeper. She drank more water before bed so that she could wake up early the next day. She also had to move quietly not to wake him up. When they fought, or when he criticized her, she would tell him, “Okay, I will change, because I am a Falun Dafa practitioner and Master tells us to put others first. This will not happen again.” She also told her husband why the persecution in mainland China is wrong. Gradually her husband changed and would go online to find out more about Falun Gong.

With a big smile on her face, Biling said that now she could use an alarm. Sometimes she made a noise when she got up, but it no longer woke up her husband. Her husband even reminded her to get up after he heard the alarm. Now she is as free as she used to be.

“Family Destroyed in Persecution of Falun Gong with Deaths of Father, Son and Daughter-in-Law”