(Minghui.org) On the 20th anniversary of Falun Gong's peaceful resistance to the Chinese Communist Party's (CCP) persecution, Falun Gong practitioners in Germany and Belgium marked the occasion by exposing the CCP's atrocities at local community events. 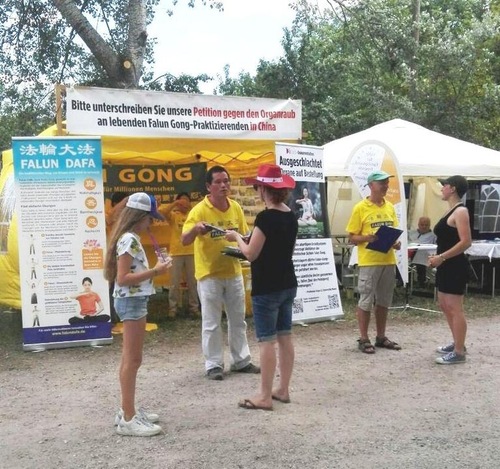 Practitioners distributed Falun Dafa informational fliers and collected signatures for a petition calling for an end to the CCP's atrocity of harvesting organs from living Falun Gong practitioners. Many people stopped to learn about the persecution. They showed great concern and were shocked that the CCP had persecuted lawful citizens who meditate and follow the principles of Truthfulness-Compassion-Forbearance. About 700 signatures were collected.

After finding out that the CCP had covered up the persecution and was afraid of being exposed, many people wanted to help by spreading the word. One woman asked for a few signature forms so that she could collect signatures through her social media. Another woman took some forms to collect signatures from her family, friends, and colleagues.

Supporters felt encouraged when they heard that the signatures had played an important role. For example, the German Bundestag’s Committee on Human Rights and Humanitarian Aid held a public hearing on May 8, 2019, about the CCP's violations of human rights and focused on the issue of organ harvesting.

Many people thanked practitioners for their great job and encouraged them to continue exposing the CCP's crimes.

Practitioners in Belgium participated in the annual Sint-Truiden summer festival in the city's center park on July 14th. They set up a booth and shared information about Falun Gong with local residents. Most importantly they also collected signatures for a petition calling for an end to the CCP's organ harvesting crimes. 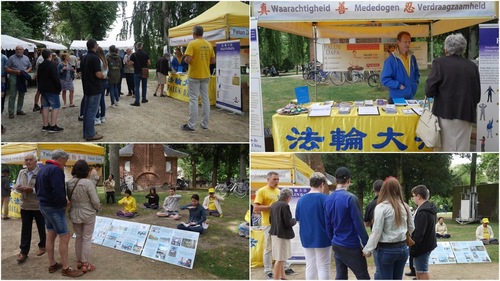 A continuous stream of people visit the Falun Gong booth. 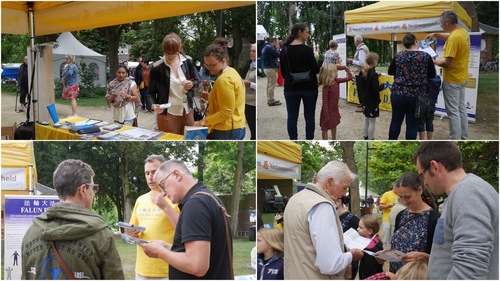 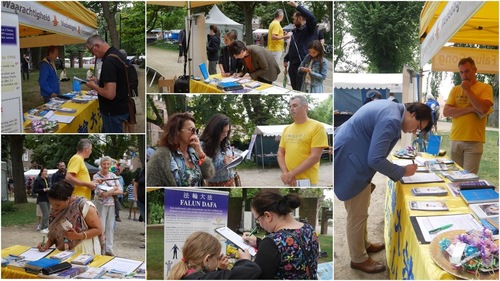 Many people watched the Falun Gong exercise demonstration and became interested in learning the exercises. Lot and Vero from Hasselt were excited to know that they would be able to learn the exercises in their town too.

Upon learning about the ongoing persecution by the Chinese communist regime, many signed the petition calling for an end to the persecution, especially because of the CCP's organ harvesting from living Falun Gong practitioners.