'Truthfulness, Compassion, Forbearance Are Morals and Values We Should Follow'

(Minghui.org) Falun Gong practitioners routinely gather at Human Rights Plaza near the Eiffel Tower on Sundays to promote awareness of the persecution in China.

On Sunday, August 17, 2019, they encountered a steady stream of people after they set up posters with information about Falun Gong and the 20-year-long persecution. Some practitioners gave out Falun Gong fliers to the tourists, while others demonstrated the exercises and gave free exercise instruction to those who showed interest. Many people signed their petition asking the Chinese Communist regime to stop the persecution. Tourists and locals alike showed positive support for the practitioners’ persistent efforts in ending the human rights violations in China. 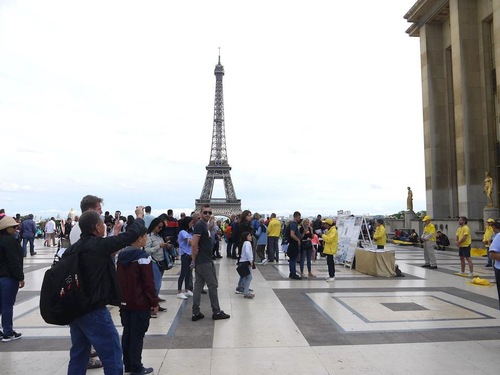 Falun Gong practitioners at Human Rights Plaza in Paris in the afternoon of August 17, 2019. 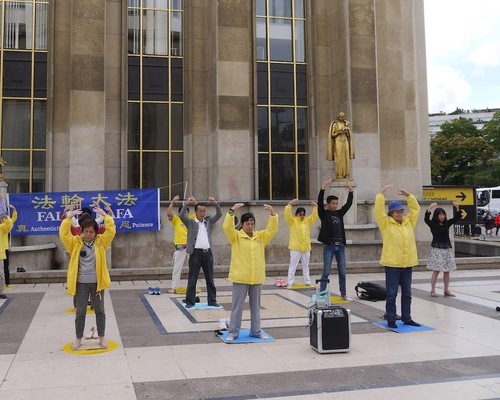 Denise Morales, an art teacher from Venezuela, signed the petition and described the persecution as a disaster and a genocide. “I am shocked to learn that all of this is happening in China. I am also shocked to know that the Chinese government systemically harvests organs from steadfast practitioners detained in prisons and profits from it. I am without words and my heart is weeping,” she said.

Morales also said: “Truthfulness, Compassion, Forbearance are morals and values we should follow. If we assimilated to these values, it is worthwhile to come to this world.” She was interested in learning the practice and asked for more information.

Lucie Maria from Canada firmly believed that no one should be persecuted for any reason. “Everyone has the right to freely choose his lifestyle.” She signed the petition and said: “I do not agree [with the Chinese regime].”

French musician Josephe criticized the Chinese regime for suppressing its own people and causing troubles for mankind. “It’s time to stop. The western countries should exert pressure on the Chinese regime, for there is no freedom there.”

A French engineer told practitioners, “In our country, the news media seldom report [on Falun Gong’s persecution] because of the economic ties to China. We need to talk about it more, because people know so little.”

Redouane Rabia was with his wife and toddler. He learned the five Falun Gong exercises because he was very curious about the practice. Afterwards he said that he felt very comfortable, peaceful, and clear-headed. He also said the pressure he had carried around over the past few months had suddenly disappeared. He was excited and decided to become a practitioner.