(Minghui.org) The 2019 Falun Dafa Cultivation Experience Sharing Conference in San Francisco took place on August 25, 2019, at Capuchino Performing Arts Center. More than 10 practitioners presented their experience sharing papers at the event and talked about how they improved themselves, let go of attachments, and how they awakened people. 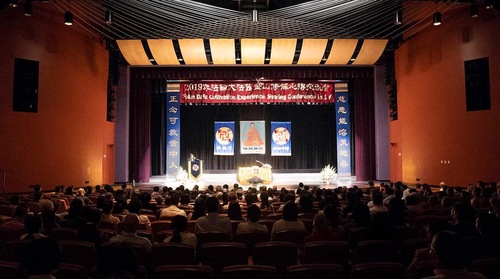 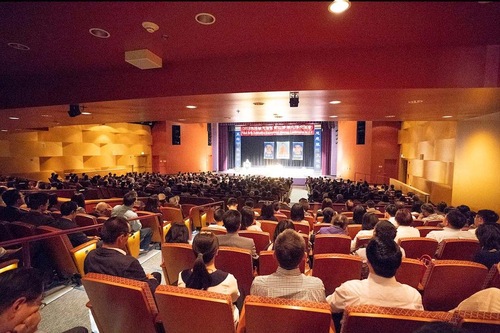 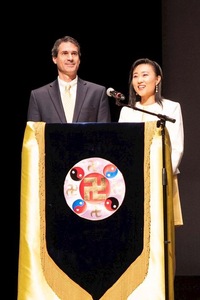 The two hosts announce the start of the conference

Practitioners from California and several other states, including Colorado, Alaska, Oregon, Utah, Washington, and New York, attended the conference.

Applying Skills to Save People

Zhen Wenbiao from San Francisco talked about his work related to producing Cantonese content for radio broadcasts. Through the years, he has applied his skills to save people, especially those who speak Cantonese.

From this process, Zhen learned that as practitioners, we need to put our hearts into what we are doing, regardless of whether we are involved in a big or small project. “Only then are we able to save people. Master Li (the founder) will also give us the best,” he said, “The stronger wish we have to save people, the more opportunities Master Li will give us to achieve that.” 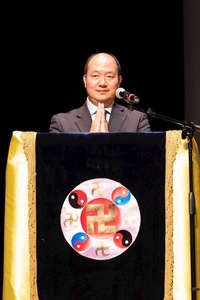 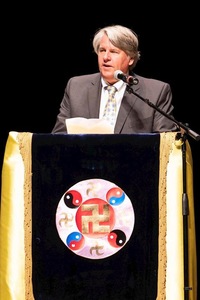 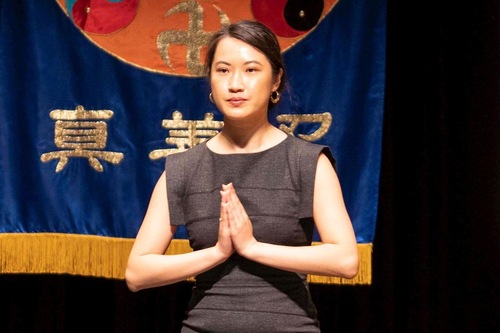 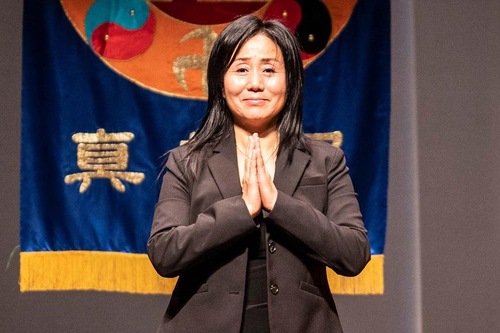 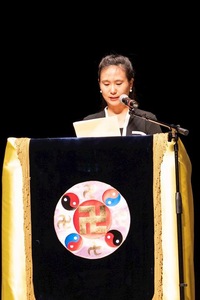 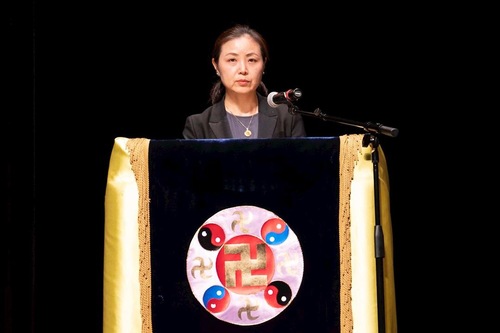 Over ten practitioners spoke at the conference

Li Xiuli from Alaska discussed how she had worked closely with other practitioners for the debut performances of Shen Yun Performing Arts in her state. “I felt like the little monk in one of the Shen Yun programs—working hard to improve himself, while receiving courage and help from the divine,” she remarked.

During preparations for Shen Yun, she talked with more than 30 practitioners over the phone to ask for help and work out details. She also worked with practitioners involved in Shen Yun production and logistics. In addition, she worked with nearly 20 practitioners face-to-face and felt she was able to do her best and cooperate well.

This process gave her plenty of opportunities to improve her xinxing, and she also witnessed many miracles along the way. Over the past 2019 season, Shen Yun had its first tour performances in Anchorage, the largest city in Alaska, and tickets were sold out for all four performances over the three days. “As a practitioner living in Alaska, I have realized that it is my mission to save people here,” she said.

With deep gratitude, she was able to cooperate with other practitioners unconditionally and achieve the goal smoothly. “I also know that Master Li has helped me so much. I just need to be there for it to become reality,” she continued.

Chris Kitze, the founder of several IT firms, shared how he made friends in Chinatown. “Once Master told us to make friends with people in Chinatown and to save them. That is what I have been trying to do,” he explained.

The environment in Chinatown is a miniature of China, he said. He listed several instances in which Chinese people were initially hesitant to hear information about Falun Dafa, but as Kitze explained, after we did things with patience and compassion they became more receptive. Some even withdrew their memberships in the Chinese Communist Party (CCP) organizations after hearing about the evil history of the regime.

He wished that more practitioners could do the same, “Especially those people from mainland China, we need to inform them of the facts and help them quit the CCP organizations for a better future,” he said. He commented that gradually more residents and visitors in Chinatown, and even people across San Francisco, have benefited from practitioners' efforts.

A Volunteer at the Airport

Ding Xiangying, a practitioner who came to San Francisco in 2014, has been going to the airport to tell Chinese people about Falun Dafa and about the persecution in China.

Throughout the 20-year-long suppression, the CCP has defamed Falun Dafa both inside China and overseas, leaving many Chinese people insensitive to the tragedies that have unfolded and even hostile to practitioners. “That is why I have to tell them not to blindly follow the Party, since persecuting innocent people and the principles of Truthfulness-Compassion-Forbearance will not do them any good,” Ding said, “In fact, separating themselves from the CCP organizations will lead to brighter futures and happiness.”

Having benefited from Falun Dafa herself both physically and spiritually, Ding is deeply touched by the profound Dafa principles and compassion from Master Li. “I have to work hard so that more people can benefit from Dafa as I have. And more importantly, I have to do it with my heart.”

“'Truthfulness, Compassion, Forbearance Are Morals and Values We Should Follow'”