(Minghui.org) Practitioners in San Juan, Puerto Rico joined the International Day of Reading for Children to introduce Falun Dafa and it’s principal book Zhuan Falun to children and parents, and raise awareness about the 20-year persecution of the practice by the Chinese Communist Party.

Children were curious and explored our booth. They looked at the photos of school children practicing the Falun Dafa exercises in India and Uruguay. They saw and browsed through Zhuan Falun as well as the introductory book, Falun Gong, in English, Spanish, and Chinese. They were quiet as if wondering what it was all about. We invited them to try an exercise, and being a little shy, they said, “Okay.” They followed us and did the Falun Standing Stance exercise. At first they were open-eyed and curious but soon relaxed and closed their eyes. As we finished they were smiling. They said that they felt “nice,” and very calm and quiet. They were lost for words as they looked at each other, and seemed satisfied and serene. 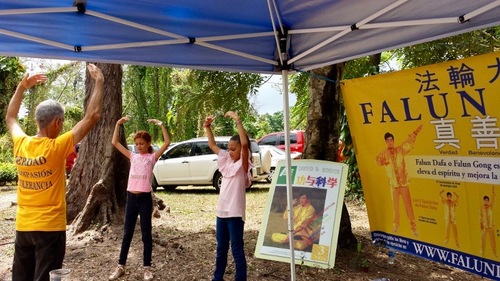 A practitioner explained that Falun Dafa has helped many children become more confident and poised, helped them to concentrate better on their studies, and sleep better and have fewer nightmares. The children were shown some of the photos of schoolchildren doing the exercises and we read together some of the quotes where a boy stated that instead of fighting with another boy, he now tolerates him. We explained that we could visit their school and give them a demonstration. They smiled and thanked us.

A young lady approached our exhibit, which documented the persecution of Falun Dafa practitioners in China. She stood reading for a while, and when a practitioner approached her she expressed shock and outrage that such brutality could be happening today. She told the practitioner that she was an author and was reading to the children today from her books on climate change and caring for the environment. She took our information and said she wanted to stay in touch. “Is anything being done to stop these atrocities,” she asked. She read U.S. House Resolution 343 and took our brochures. “This is very serious,” she said, commending us for what we were doing. 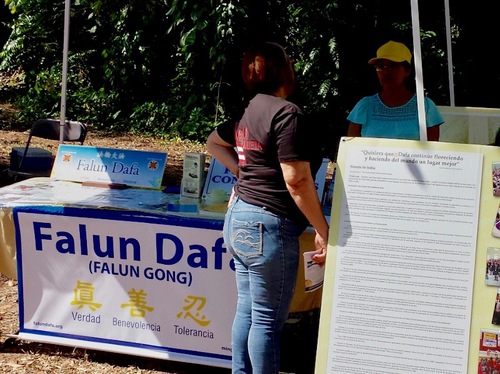 An author of books on the environment was shocked at the genocide targeting Falun Dafa practitioners.

As a man was helping his wife set up a booth nearby, our exhibits caught his eye. He slowly worked his way through them all, reading everything. He didn’t say much, but read through our brochure. We later noticed that he was watching attentively when we did the exercises. After we finished he commented that he had never seen such exercises before. “They look very interesting,” he said, and put his name down to be contacted for our next class. “I’d like to learn how to do the exercises,” he said to his wife as we finished our demonstration.

Amid songs and theater, with clowns and music, many children laughed and sang as they made a variety of handicrafts related to the importance and joy of reading. We saw children urging their families to hurry up so that they would not miss an event. Families celebrated the wonders and fun of language through riddles and rhymes, and found Falun Dafa and Zhuan Falun for the first time in an open-air theater of giant trees.

“Belated News: Father and Son Pass Away Nine Months Apart, from Persecution of Their Shared Faith”