(Minghui.org) Falun Gong practitioners in New York have been displaying banners in front of the Chinese Consulate and doing the exercises together since 2002. They come here voluntarily to tell people the real story of Falun Gong and to debunk the Chinese Communist Party (CCP)’s defamatory propaganda.

Falun Gong, also known as Falun Dafa, is a cultivation system that consists of gentle exercises and living by the principles of Truthfulness, Compassion, and Forbearance. The CCP has suppressed it since July 1999. 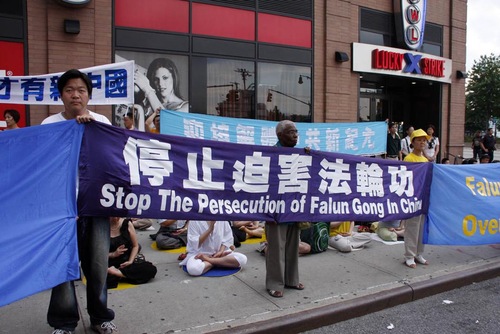 Falun Gong rally in front of the Chinese Consulate in New York on July 20, 2010.

Over the past 17 years, practitioners have maintained a presence in front of the Chinese Consulate in New York to stand up for the freedom of belief. Many Chinese have begun to accept the facts about Falun Gong and no longer believe the CCP's lies. However, there are still pro-CCP organizations and individuals who side with the perpetrators and commit bad deeds. Below is information on some of them. 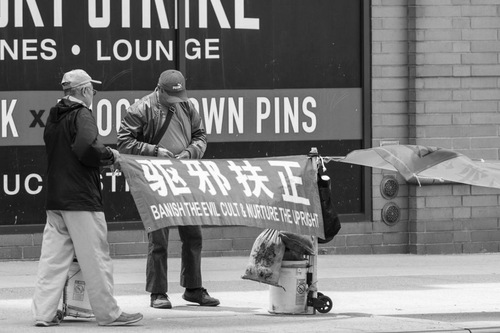 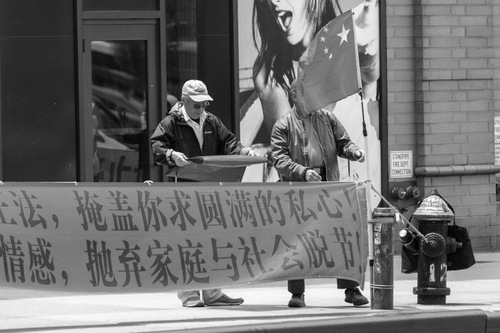 Two Chinese men show up regularly on weekdays with defamatory banners and the CCP flag.

Two Chinese men have been coming here regularly since May 2015 to harass and attack Falun Gong practitioners. Every weekday from 8:30 a.m. to 1:00 p.m., they put up banners that slander Falun Gong and a CCP flag. Then they go back to the Meizhong Huaren Fuwu Gongsi (American-Sino Services Center) in Flushing to return the cart, banners, and flag.

Where are these people from? Why are they openly carrying out the CCP’s persecution policy on American soil? We look forward to government agencies and human rights organizations investigating them.

What we know so far:

One of them is Ningxiang Liu, about 65 years old. He comes every weekday and is very aggressive. He once kicked a practitioner so hard that the practitioner’s phone flew into the air. Liu lives at 136-19 57th Rd, FL3, Flushing, NY 11355. Liyan Hu also lives at this address and she is probably Liu’s wife. 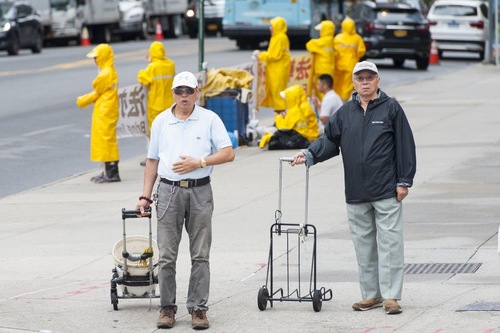 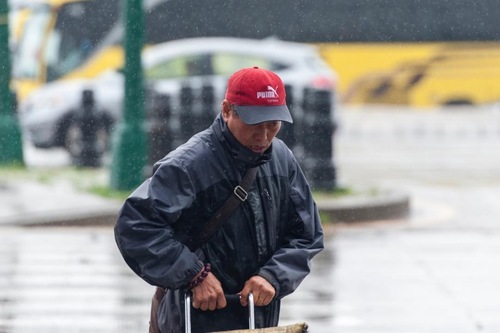 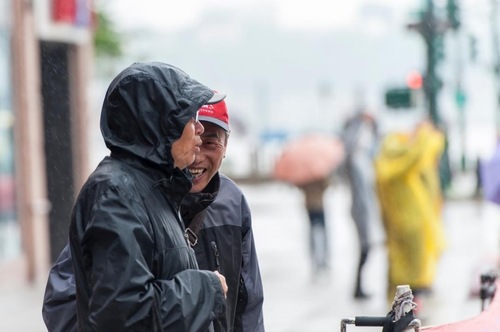 Another man comes every Wednesday to substitute for Qiu. 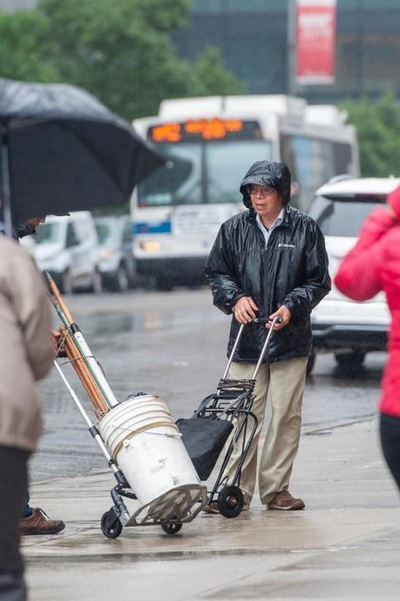 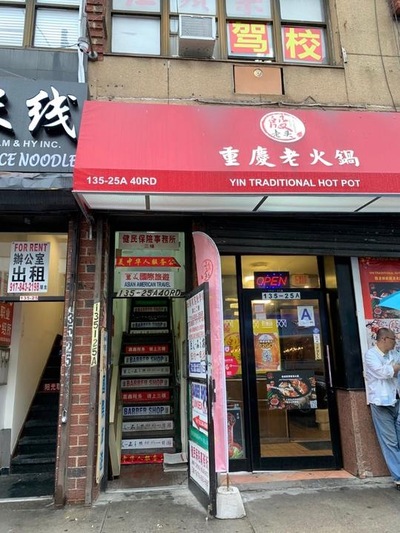 Every day after their event, the men return their cart, banners, and flag to the Meizhong Huaren Fuwu Gongsi (American-Sino Services Center). 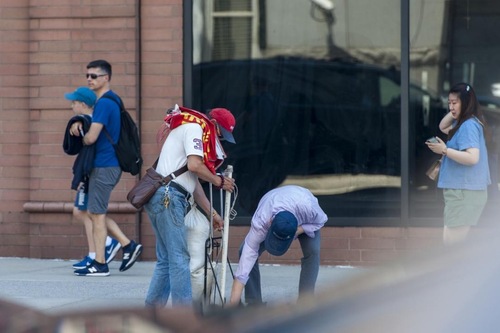 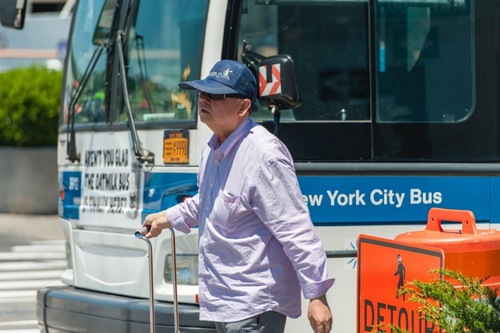 Besides the three individuals above, others come occasionally to participate.

Through the years, some agents have stopped working for the CCP once they learn the facts about Falun Gong, the persecution, and the Party’s propaganda tactics. Below is an example.

One young man first came in the winter of 2015. He displayed defamatory banners and distributed fliers that slandered Falun Gong. “A pedestrian once took one of his flyers. But after talking with me and hearing what Falun Gong really is, the pedestrian gave me the flyer and walked away,” recalled practitioner Ms. Huang, “That man was furious. He came up to me, swore at me, and pushed me around.”

According to Ms. Huang and other practitioners, the man was very aggressive. He often came very early and occupied the area where practitioners usually put up banners. Following the principles of Truthfulness-Compassion-Forbearance, practitioners were polite and had no arguments with him. Instead, they told him about the physical and spiritual benefits of the practice and the ongoing suppression in China.

After witnessing the practitioners’ kindness and patience, the man began to change. One day, a taxi driver stopped in front of the defamatory banners, and Ms. Huang explained to the driver about Falun Gong and the CCP’s hate propaganda. She turned around and saw the man standing right in front of her. Expecting to be cursed, she surprisingly heard the man say, “You are doing a good job. I bet if you keep on like this, you can achieve anything.” After that, he often watched Ms. Huang telling Westerners about Falun Gong in English. Since the man could not understand English, she translated her words and people’s feedback to him in Chinese. The man did not say a word, but he listened attentively.

The open area in front of the Chinese Consulate is next to a river and probably the coldest and windiest spot in the city in winter. In the winter of 2015, a strong gust of wind knocked a 90-year-old practitioner down. The man rushed over to help her up. This practitioner had talked with him previously about Falun Gong, but he was always quiet.

With help from this man and other practitioners, the elderly practitioner was able to get up and walk. Surprised by her quick recovery, the man checked her over several times that day to make she was all right. Not long after that, he said to a practitioner, “I will not distribute these [defamatory] fliers anymore.” He stopped the next day.

Several days later, he told a practitioner, “I will not come anymore,” After that, he never appeared there again.

Many overseas Chinese organizations have close ties with the CCP. The regime has also dispatched secret agents to infiltrate and influence overseas organizations. Although disguised as Chinese community leaders, some secret agents report directly to the Department of the United Front, the 610 Office, and Chinese Embassies and Consulates to help carry out the CCP policies outside of China.

The numbers are very high. A report from 2005 indicated there were at least 10,000 overseas Chinese organizations. Some organization leaders were often invited to China for training on networking, people management, and diplomacy. News reports in mainland China showed some local Chinese governments allocated hundreds of thousands of yuan to cover the cost of such training.

The international community is now putting more effort into curbing human rights violations in China, including the persecution of Falun Gong.

The U.S. Department of State announced earlier this year that it will tighten visa approvals and may deny visas to human rights violators and those who persecute religious beliefs, including Falun Gong. This applies to both immigration visas and non-immigration visas such as for tourism and business. Visa holders, including those already granted permanent residence (green card), may be denied entry.

Judy Sgro, Member of the Canadian Parliament and former Immigration Minister, said in a recent interview that the persecution of Falun Gong is “unwarranted and unfair.” She expected legal measures similar to the Magnitsky Act in the U.S. would be instituted in Canada. “Whether we are talking about Falun Gong or about people involved in the Holocaust, people who do not respect the human rights of others and our nation should not be given the privilege to get a visa to get into the United States, Canada, or Australia.”

Progress has also been seen in Europe. Baerbel Kofler from Germany, a federal Commissioner for Human Rights Policy and Humanitarian Aid, posted a news release on the German Federal Foreign Office website on July 20, 2019, in which she condemned Beijing for its persecution of Falun Gong. “During the past 20 years the Chinese communist regime’s treatment of the practitioners of the spiritual cultivation practice Falun Gong has been vicious. Falun Gong practitioners are persecuted and detained without legal process. Many reports have shown that practitioners are tortured and even died during detention.” She demanded that Beijing “follow international guidelines and Chinese laws to protect human rights, including the rights of Falun Gong practitioners.”

Falun Gong practitioners recently submitted a list of names of human rights violators to the U.S. State Department, urging the agency to deny these individuals visas or port entries. An official from the U.S. State Department confirmed receipt of the list and said they would take appropriate action on all cases. He commented that the evidence provided by Falun Gong practitioners was credible and well-formatted.

We look forward to receiving more information on human rights violators related to Falun Gong. Any information is welcome and can be submitted through ReportFugitive@minghui.org.