(Minghui.org) The guards at Lingyuan City Detention Center in Liaoning Province are using an extreme stretching torture on Falun Gong practitioners who refuse to renounce their faith.

What Is a Stretching Board? 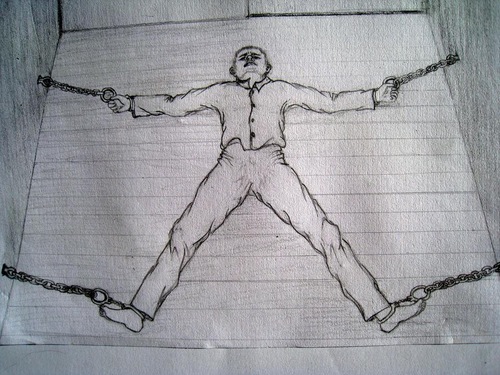 The stretching torture is tying the practitioner to a 6.5 by 5 ft plywood board in a spread eagle position. It is one of the most common tortures used at the detention center.

At each of the four corners is a fixed iron chain. With his hands and legs restrained to the chains and body stretched to the maximum, the victim will be immobilized and suffer excruciating pain.

The stretching board can be lain flat or stood upright. It is also portable and can be moved to any cell.

Mr. Zhao Changfu,a practitioner from Lingyuan City, has been detained at the detention center since August 22, 2018. He went on a hunger strike to protest the persecution on October 26, 2018. He was tied to the stretching board and suffered extreme pain. The guards also force fed him.

Another victim of this torture was Mr. Zhang Zhenxiang. In November 2016, he was tied to a board inside an isolation room for eighteen hours, as punishment for his hunger strike. He was also forced fed. He developed hypertension as a result.

In early 2017, the detention center mixed medicine in the food and forced Mr. Zhao to eat the meal to lower his blood pressure. Mr. Zhao went on a hunger strike again. Five days later, he was forcibly taken to a hospital, where he was restrained to the hospital bed and given IV drips. On the following day, he was taken back to the detention center and tied to the stretching board in the isolation room for another 24 hours.