(Minghui.org) Falun Gong practitioner Mr. Zhao Changfu from Lingyuan City was arrested by a dozen plainclothes police officers on August 22, 2018, while taking his son to school. One of the officers showed his identification and claimed that Mr. Zhao was needed for an inquiry.

Mr. Zhao was taken to his home, where he was shown a search warrant, after which the police ransacked his home for 40 minutes. Many of his personal belongings were seized, but a list of the confiscated items, as required by law, was not provided.

Mr. Zhao tried to clarify the truth about Falun Gong to officer Zhao Fengchen. He said that the China Administration of Press and Publication repealed its ban on Falun Gong books in 2011. Zhao Fengchen claimed not to be aware of the ruling.

Some of the officers threatened Mr. Zhao, saying that he would remain in detention forever and that his son would not be able to become a government clerk or join the military unless he cooperated.

Mr. Zhao went on a hunger strike on the morning of October 26, 2018, to protest the illegal persecution. As a result, he was force-fed and tortured with extreme body stretching. 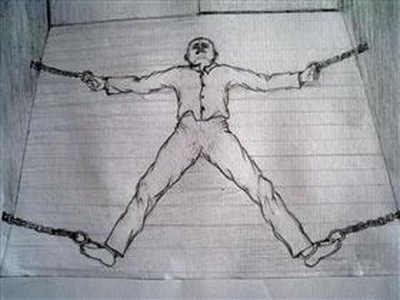 The detention center guards punished the other inmates in his cell by not allowing them to sleep, in retaliation for Mr. Zhao’s hunger strike, so he stopped the hunger strike.

Related Article:Couple Arrested for Their Faith Before Taking Son Back to School

“I Learned to Stop Passively Following Others”