(Minghui.org) “I was uncomfortable again last night. My chest felt so tight that I had trouble breathing. I couldn't sleep at all,” said Ms. Sun Libin in late 2013 after serving three and a half years for her faith in Falun Gong, a mind-body practice that has been persecuted by the Chinese communist regime since 1999. She had repeated episodes of chest tightness after she was released from prison. 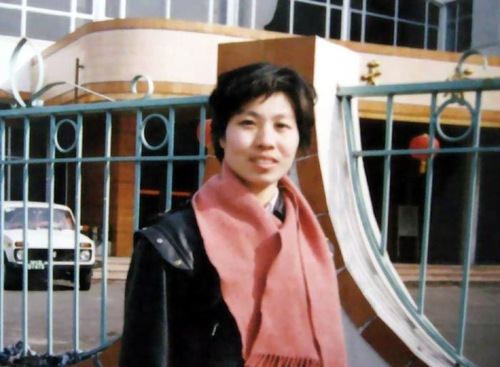 Ms. Sun of Jiamusi City, Heilongjiang Province, contracted tuberculosis during her imprisonment, but she was denied medical parole because she refused to give up her faith.

Given her minimum pension, she couldn't afford expensive medical care and continued to deteriorate after her release.

When her family took her to the hospital on March 3, 2019, the doctor said her lungs were completely useless and nothing could be done. Ms. Sun passed away around 3 a.m. the following day, having turned 65 just a week before.

According to those who saw her for the last time, she was emaciated, her complexion was ashen, and her voice was weak and hoarse. Her feet were swollen and she couldn't walk by herself. She had bedsores on her buttocks from being bedridden for a long time.

Because she couldn't afford heat, she had to wear winter jackets and pants in bed. Her family put a small portable heater by her bed, but all the other rooms were as cold as outside, which was usually -20°F in the coldest province in China.

Ms. Sun was the oldest daughter in her family. From a young age, she helped her parents do housework and take care of her younger siblings. After she married, she was a victim of domestic violence for eight years, until she finally divorced her husband.

But being a single working mom wasn't easy. The hardship and pressure took a toll on her health. She developed migraines and stomach problems. She often felt her chest was very tight and ached. She tried many medications, but nothing worked.

Ms. Sun was introduced to Falun Gong in the spring of 1998, and her health soon took a turn for the better. The spiritual teachings also helped her to overcome the mental trauma of her unhappy marriage. She became more positive and much happier.

Those who knew her well said that she’d changed completely.

Ms. Sun and Her Family Persecuted for 20 Years

Because she would not give up her faith that had improved her health and pulled her out of deep depression, Ms. Sun was arrested five times and sentenced twice for a total of seven and a half years.

Her pension was suspended during her imprisonment, and her annual pension increase was also stopped. By 2018, she only received roughly 66% of the pension she was entitled to. Meanwhile, her family had thousands of yuan extorted from them in order to secure her release. Both of which caused tremendous financial difficulties for her and her family.

Terrified by the police brutality during Ms. Sun's arrest and home-ransacking on March 6, 2002, her father fell sick and passed away.

Ms. Sun's son was offered a faculty position after he graduated from college, but because his mother practiced Falun Gong, the school withdrew the offer. Just as he was about to get married, Ms. Sun was arrested again. His girlfriend broke up with him, fearing she might be implicated in the persecution.

Ms. Sun was first arrested on June 18, 2000, when she went to Beijing to appeal for Falun Gong. She was detained at the Jiamusi City Detention Center for two and a half months.

She went to Beijing to appeal again on January 8, 2001. The police beat and verbally abused her. They also shocked her with electric batons. She was detained in the Jiamusi Detention Center for six weeks. The police extorted 2,000 yuan from her family before releasing her.

She was blacklisted and often harassed by the authorities from then on.

At 10 p.m. on March 17, 2009, she had already fallen asleep when officers knocked on her door. When she refused to open up, they shouted for a while and then left.

Ms. Sun was arrested on March 6, 2002, after being reported for talking to people about Falun Gong. The police beat her on the way to the police station.

At the station, they tied her to a metal chair. They grabbed her house key and a dozen officers ransacked her residence. Her Falun Gong books, several photos of Falun Gong's founder, and even some blank paper were confiscated and used as evidence against her. To torment her, the officers forced Ms. Sun to step or sit on the photo of Falun Gong's founder.

Ms. Sun was sentenced to four years in Heilongjiang Women's Prison in April 2002.

When she was admitted to the prison on September 4, 2002, Ms. Sun was forced to squat for long hours. The guards took turns slapping her in the face from noon to midnight after she refused to write statements to renounce Falun Gong.

When she still refused to comply, the guards put her in solitary confinement. She was restrained on a metal chair for three days and then on the cement floor for another seven days.

For the next ten days, the inmates forced her to engage in strenuous physical training or stand out in the sun from morning to midnight. In the evening, she slept on the cold concrete floor without bedding. The nails of her big toes fell off.

Because Ms. Sun still refused to give up practicing Falun Gong after several rounds of torture, the guards assigned four inmates to monitor her around the clock. The prison enacted a “guilty by association policy.” In other words, if Ms. Sun was to be punished, the inmates would receive the same treatment, which made the criminal inmates hate the practitioners.

In the 7th ward, one practitioner almost died when an inmate pushed her from the top bunk. But instead of being punished, the inmate was rewarded for her “active performance.”

Because Ms. Sun refused to comply with the prison rules, the inmates often beat her, slapped her in the face, or hung her up by her wrists. She was once kicked down the stairs.

At one time, she was beaten by a dozen inmates. One inmate grabbed her hair and hit her head against the ground. Another inmate punched her in her left eye. Her head became swollen and bruised and her face was disfigured. Her blood pressure skyrocketed. She was dizzy and hurt all over and had to stay in bed for more than ten days.

While the inmates were torturing her, the guards encouraged them to beat her even harder.

Ms. Sun didn't enjoy a peaceful life for too long before she was arrested again on March 17, 2010. This time, she was sent to a forced labor camp for two years. She was released after she became paralyzed from the tortures at Heilongjiang Women's Forced Labor Camp.

She was arrested again on June 22, 2010, for accompanying Zhao Xin, the 18-year-old son of Ms. Ma Chunli to the police station to demand Ms. Ma's release.

After nearly seven months in detention, Ms. Sun was sentenced to three and a half years in prison in the Dongfeng District Court on January 5, 2011.

While people were celebrating the 2011 Chinese New Year, Ms. Sun was imprisoned for the second time in Heilongjiang Women's Prison.

The guards continued to torture and brainwash her in attempts to force her to renounce her faith.

Beginning at 5:30 a.m. every day, she was forced to sit on a small stool until 9: 30 p.m. without moving. At the same time, the guards forced her to watch propaganda videos attacking Falun Gong. In the evening, people read slander about Falun Gong to her. If she protested in any way, she was verbally abused.

On March 23, 2011, she was transferred to a different ward, where she was no longer brainwashed, but was physically tortured.

Two inmates watched her around the clock, including when she was eating or using the restroom. She was also forced to sit on a small stool from morning to evening every day.

Her health quickly declined as a result of both physical and mental torment. She had a high fever for a week in early May 2011. Even though she was unable to walk due to the pain in her legs after that, the inmates still forced her to sit on the small stool every day for another 13 months.

Beginning in May 2013, Ms. Sun started to cough all the time. She was quarantined a few days later after the doctor discovered she had tuberculosis. Her family demanded that she be released on medical parole several times, but they were turned down.

Ms. Sun said she was almost driven insane by the non-stop torture and physical restraint devised to pressure her to give up her faith.

After seven months in the prison hospital, Ms. Sun was released on December 21, 2013, at the end of her term. The police intended to continue holding her in detention but later relented when her family protested.

Ms. Sun was arrested for the fifth time when she was traveling to Jiansanjiang, a town about 140 miles from Jiamusi, on the morning of December 17, 2014, to attend the high profile trial in the “Jiansanjiang Human Rights Case.”

In this case, seven Falun Gong practitioners and four of their lawyers were arrested and abused for seeking the release of imprisoned practitioners in the Qinglongshan Brainwashing Center in March 2014.

Ms. Sun was held at the local police station in Jiansanjiang from 6 a.m. to 3 p.m. before being sent home.

The police harassed her the next day and again a month later, around the time of the second hearing in the Jiansanjiang case in January 2015.

Ms. Sun Libin's Personal Account of the Persecution She Suffered for Upholding Her Belief