(Clearwisdom.net) On June 22, 2010, Ms. Sun Libin, a Falun Gong practitioner from Jiamusi City, accompanied a teenager to see his mother, a fellow practitioner who is incarcerated in the Jiadong Police Station. Ms. Sun was arrested by the Jiadong Police. It has been over fifty days, and her mother has yet to find out her whereabouts.

The following is the appeal by Sun Libin's nearly 80-year-old mother to the Jiamusi Procuratorate and related government officials. 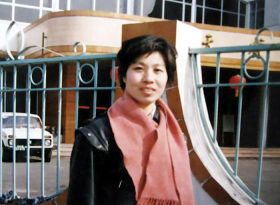 I am the mother of Sun Libin, a Falun Gong practitioner from Jiamusi City. So far it has been 51 days, and I cannot find my dear daughter Sun Libin, who lives with me. I cannot find out anything regarding her whereabouts. Every day I can only weep, holding her photo. My daughter was arrested at the Jiadong Police Station on June 22. I and all the kind people around me, cannot figure out what she did wrong.

Libin's friend, Ms. Ma Chunli used to be almost paralyzed. After she started to practice Falun Gong, not only could she stand up, but also she could do some light work. She lived with her son Zhao Xin. On March 17, 2010, Ma Chunli was arrested by Sun Lei from the Jiadong Police Department. She was sentenced to two years of forced labor re-education. Because of the persecution she suffered in the Harbin Labor Camp, she is paralyzed again and cannot take care of herself. During this period of time, Ma Chunli's friend, practitioner Tong Yaqing, went with Zhao Xin, who is still a teenager, to the Jiadong Police Station to ask about the situation of Ms. Ma. However, Ms. Tong was arrested at the police station and was sentenced to one year of forced labor.

Seeing young Zhao Xin living alone, not able to see his mom after visiting Harbin several times, and worried the current situation of Ma Chunli, Libin went to the Jiadong Police Station again to tell these facts to the policemen there. However, the policemen, led by Feng Kaidong, the director of the police station; Geng Yue, leader of the Domestic Security Divison of the Dongfeng Police Department in Jiamusi city; and Xu Yongli, director of the Dongfeng Police Department, forcibly arrested my daughter, then broke into her home and stole her personal belongings.

Sun Libin is 57 years old. She used to be very ill, and had frequent headaches. Occasionally, when her headaches would get so intense, she felt that she would rather die. There was no medicine that could cure her headaches, and hospitals could not figure out the problem either.

A colleague introduced Falun Gong to Libin. She started to practice Falun Gong in the spring of 1998. {Through practicing Dafa] she realized the goal and meaning of her life. She decided that this was the path for her and that she would stick to it! Studying the Fa, doing the exercises, improving her Xinxing, she completely changed. All of her illnesses disappeared, she felt light when walking, and there was no need to take medicine any more. Every moment, she felt the compassion and protection of Master Li. She was extremely happy.

Practicing Falun Gong gave Libin more than just physical health. She worked hard and did not fight for personal benefits. She said, "Without Dafa, I could not have lived to this day and I could not do this."

Once, my grandson was hit by a taxi. He was thrown high into the air and hit the ground heavily. My grandson lay on the ground for a long time and could not get up. The driver was very scared. After he saw the boy get up with difficulty, he realized what happened and offered to send him to the hospital. My grandson said he was fine and that there was no need to go to hospital. All of the people watching said that the driver had met a very kind person. After the driver took the boy home, he insisted on giving the family 500 yuan. Ms. Sun refused to accept the money and told him, "I am a practitioner of Falun Gong. I know you did not do it on purpose. Master Li told us to always consider others. My son is fine and I will not take your money. You must drive more carefully in the future."

Just a few days before Libin was arrested, she went to pay the heating bill for our house. When my husband was alive, we received compensation from his workplace. He passed away not long ago, so his workplace did not know about it. They still payed us according to the old record. This is something many people hope for. However, Libin went to the related departments, told them the situation, and paid back all of the money that they had mistakenly sent us. She has done many good deeds like this. However, starting from July 20, 1999, just because my daughter believes in Truthfulness-Compassion-Forbearance, she has been persecuted many times.

On June, 18, 2000, Libin went to Beijing to appeal for justice for Falun Gong. After she was arrested, she was detained in the Jiamusi Detention Center for two and a half months. On January 8, 2001, she went to Beijing again to appeal for Falun Gong, and she was detained in the Jiamusi Detention Center for another one and a half months. On March 6, 2002, Shao Fuxiang, a policeman from the Zhongshang Police Station, Qianjin Police Department in Jiamusi City, with two other policemen and a female staff member, arrested her and took her to the Zhongshan Police Station. The excuse for her arrest was that she told others about the benefits she gained from Falun Gong. On the way to the police station, the policemen beat her. After they arrived at the police station, the policemen tied my daughter to an iron chair. Shao Fuxiang took away my daughter's house keys, then they drove to her place and ransacked her home. The apartment was turned upside-down and they stole a lot of personal belongings. After they went back to the police station, they tried to force Libin to step on a photo of Master Li. Libin refused. They lifted up her feet to force her to step on the photo. During the struggle, Libin's slacks were torn. The policemen put the photo of Master Li on a chair and tried to force her to sit on it. Seeing her still refuse to do so, they shackled Libin to an iron chair in the middle of the room and would not let move. Then they held Libin in the detention center. Later, she was sentenced to four years in prison. She suffered inhuman tortures in Heilongjiang Women's Prison.

At around 10 p.m. on March 17, 2009, while Libin was fast asleep, she was awakened by knocks at the door. Several policemen from the Zhongshan Police Station in Qianjin District tried to trick her into opening the door. My daughter was alone and it was quite late. She did not open the door for them. The policemen could not get her to open the door, so they left.

In the afternoon of June 22, 2010, my daughter accompanied young Zhao Xin to the Jiadong Police Station to ask about the situation of Zhao Xin's mother. She was arrested and beaten. I heard that the policemen grabbed Libin, pulled her hair and slammed her against the wall. Later, Libin was detained in the Jiamusi Detention Station. It has been 51 days that they have not allowed family visits, and I've heard that they plan to persecute her more severely.

There are many people like Libin in China, who benefited from the practice of Falun Gong. However, these 11 years of persecution have broken up many families, disturbed the peaceful life of many families and caused the death of many good people. According to the Clearwisdom website, there are already 3,383 confirmed deaths of Falun Gong practitioners, and there are about half a million Falun Gong practitioners detained.

I am almost 80 years old and I need my daughter to take care of me. My husband just passed away, and the Jiamusi Police Department has detained my daughter. I am very sad. My daughter is innocent. She did not do anything bad. I hope you can get to know the truth and give me back my daughter as soon as possible.