(Minghui.org) Over 200 Falun Gong practitioners participated in the National Independence Day Parade in Washington DC on July 4, 2019. Falun Gong (also known as Falun Dafa) was one of the 116 participating groups in the nation's 243rd Independence Day celebration. Hundreds of thousands of people from across the USA and the world attended this year's celebration in the U.S. capital city. 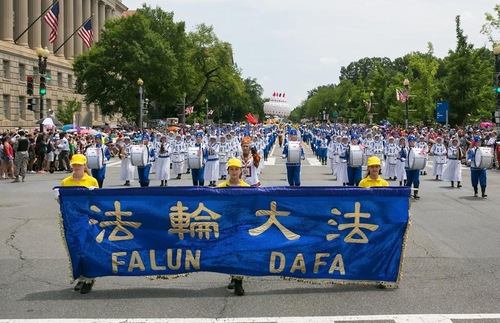 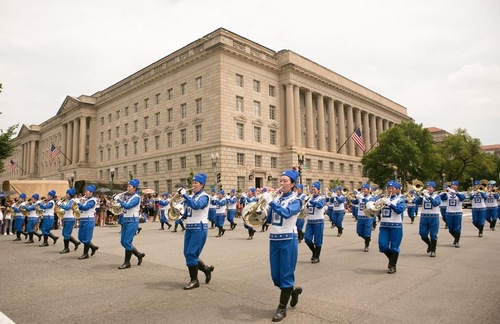 The Tian Guo Marching Band has been a part of the parade for 14 consecutive years. 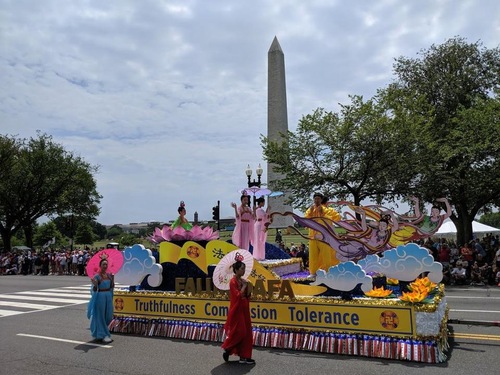 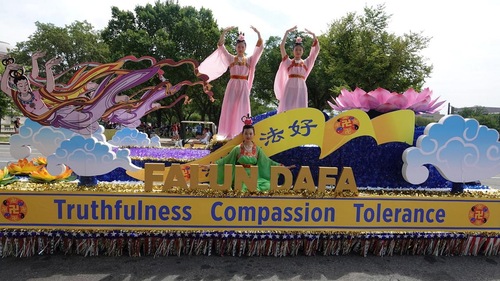 Demonstrating the Falun Dafa exercises on the float. 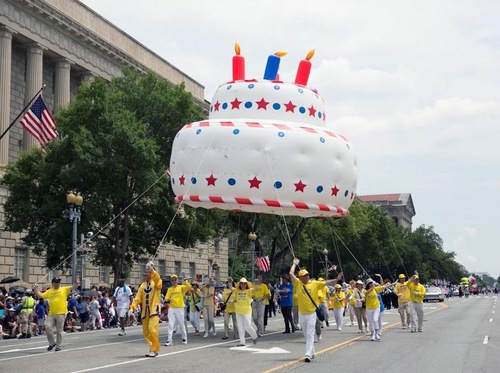 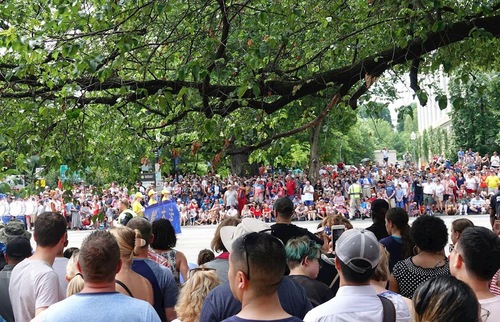 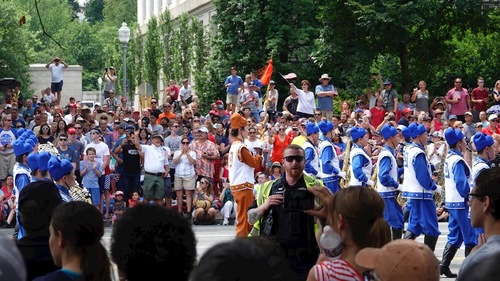 Many people were eager to take photos of the Tian Guo Marching Band.

The parade stepped off from the intersection of Constitution Avenue and Seventh Street at 11:45 a.m. As soon as the Tian Guo Marching Band started performing, spectators reacted to the peaceful, soul stirring music. Many people took photos and videos as the band marched by.

Band Director Zhou said that over 160 musicians participated in the parade and all are Falun Gong practitioners ranging from teens to octogenarians. Among the band members are doctors, reporters, engineers, company administrators, and students.

The band performed a number of works including Falun Dafa Is Good, the Fa Rectifies the Universe, Delivering Treasure, and the U.S. national anthem, The Star Spangled Banner. 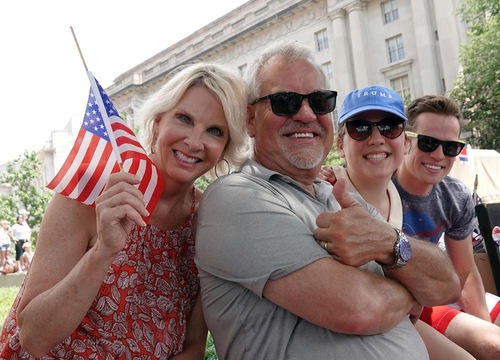 Mark, from New Hampshire with his wife and children

Mark, his wife and their two children from New Hampshire had come to enjoy the celebration in Washington DC. They said it was their first time seeing a Falun Gong procession.

Mark’s daughter has a special affinity for Chinese culture and studies Chinese language. She said, “I like the [Falun Gong] float with the words ‘Truthfulness-Compassion-Forbearance.’ It's beautiful.”

Mark said that the Falun Gong float was the most beautiful in the whole parade. He was impressed with the band and remarked that it was very processional. 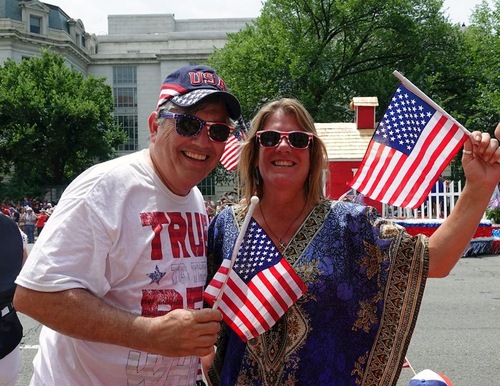 Mark Benny and wife from Maryland

Mark Benny and his wife drove over two hours to Washington to watch the parade. They said that the Falun Gong float was the most beautiful float in the parade. 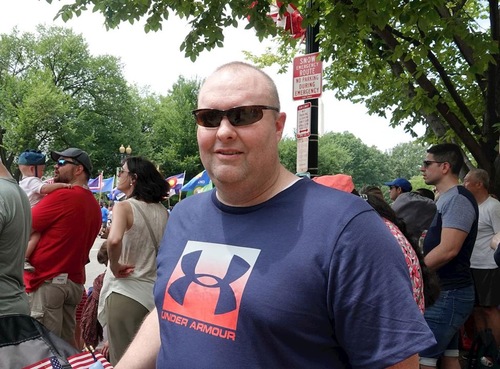 John, from Virginia, was in Washington to see the Independence Day parade for the first time. He said of the Falun Gong procession, “This is the biggest procession – splendid! They prepared very well and must have practiced a lot.” 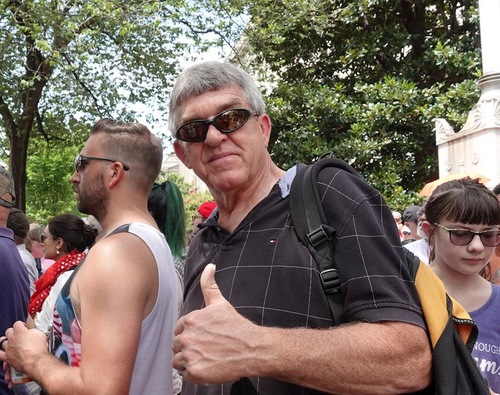 Practitioners Enjoy Being a Part of the National Celebration 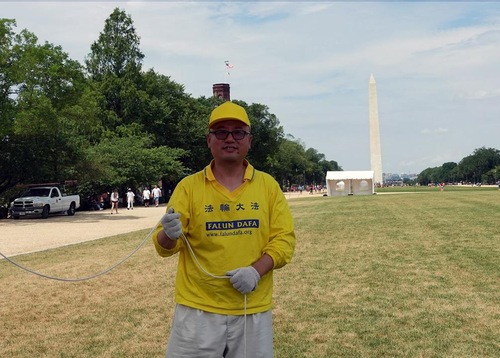 Practitioner Huidong Zhang from Maryland participated in the parade for the fourth consecutive year.

Practitioner Huidong Zhang from Maryland talked about why participating in the Independence parade is so meaningful to him. He is originally from China, where Falun Gong has been brutally persecuted for 20 years. He shared, “I was arrested and detained many times for not giving up practicing Falun Gong in China. I treasure the freedom in America.” 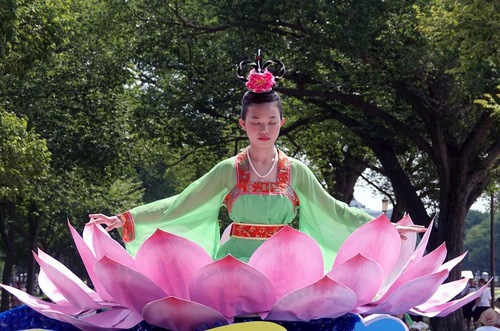 Xinyang, dressed as a celestial maiden, demonstrated the sitting meditation on the Falun Dafa float. She said she was happy to help people get to know Falun Gong. Like Huidong, Xinyang has been touched by the persecution in China. Her father was persecuted to death by the Chinese Communist Party (CCP) for practicing Falun Gong. 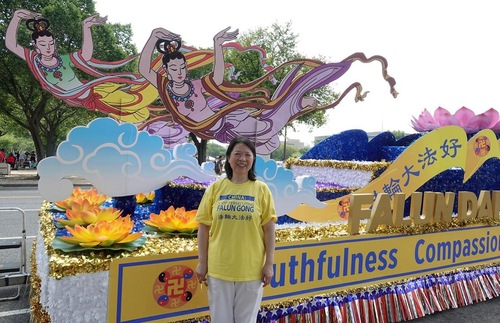 Ge Min, the organizer of the Falun Gong section of the parade, said, “Falun Gong has been persecuted in China for 20 years. Many practitioners have been illegally detained, tortured, or killed for their organs for organ transplantation. Falun Gong practitioners participate in the Independence Day parade and deeply feel the freedom. We treasure the opportunity to practice Falun Gong in this free land, and wish to let more people know about Falun Gong.”

Falun Gong was first taught to the public in 1992. Nearly 100 million people across China were soon practicing Falun Gong after experiencing improvement in their health and character. Jiang Zemin, former head of the Chinese Communist Party, perceived the spiritual discipline's growing popularity as a threat to the CCP's atheistic ideology and issued an order to ban Falun Gong on July 20, 1999.

Minghui.org has confirmed the deaths of thousands of Falun Gong practitioners in the persecution over the past 20 years. The actual number is suspected to be much higher, but due to the Chinese regime's tight censorship of news about Falun Gong, it is very difficult to get accurate information. Many more practitioners have been imprisoned and tortured for their faith.

Independent researchers have confirmed allegations that the CCP has been involved in the harvesting of organs from detained practitioners and other prisoners of conscience, who are murdered to supply the organ transplant industry.

Under Jiang's personal direction, the CCP established the 610 Office, an extralegal security organization with the power to override the police and judicial systems. Its sole function is to carry out the persecution of Falun Gong.

“Cultivating Myself When Others Don't Accept What I Say”