(Minghui.org) Today's news from China includes incidents of persecution that took place in 12 cities or counties in 8 provinces, where at least 25 practitioners were recently persecuted for their belief. 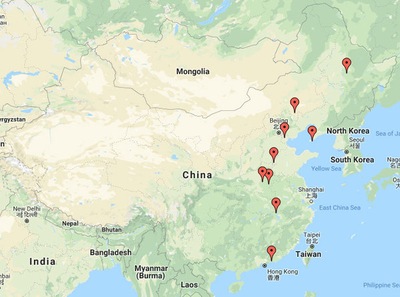 Ms. Zhang Xiuping, over 60, was arrested when she went through customs in September, 2019 when she was on her way to visit her son in Australia. She was sentenced to four and a half years in prison by the Xiangcheng City Court.

Ms. Zhao Ermao, her sister Ms. Zhao Simao, Mr. Yu Songsi, Ms. Fang, and Ms. Fang’s husband were arrested at Ms. Fang’s home and taken to a police station on July 2, 2019. Mr. Yu’s home was ransacked by police. Ms. Fang was released because of her poor health. The other four are being held at the Jiujiang County Detention Center.

Ms. Liu Yuqin and Ms. Xu Changlan from the Ganjingzi District was arrested by officers from the Ganjingzijie Police Station after someone reported them when they gave out software to break through China's Internet blockade. Ms. Liu was released on July 5, 2019. Ms. Xu’s situation is unknown.

Ms. Xu Ceng from the Baodi District visited Ms. Wang Xiuzhi, who was sick, in Changyi City on July 3, 2019. Ms. Wang’s daughter-in-law reported her, and she was arrested by officers from the Changyi Domestic Security Division. Ms. Xu was released six hours later.

Ms. Li Xiuxia and Ms. Zhang from the Jizhou District were arrested on June 24, 2019 when they were talking to people about the persecution of Falun Gong in the Cuipingshan Open Market. Their homes were ransacked.

Ms. Zhao Chunhua was arrested at home on the morning of July 2, 2019. Officers took her to the police department, photographed her, dragged her to a metal chair in an interrogation room, and interrogated her. She was released after 4 p.m.

Mr. Lin Shiquan of Meilong Town was arrested at home in May, 2019 by officers led by Lin Xiaodan, deputy director of the Haifeng County Police Department. The officers confiscated his computer, electric car, and Falun Gong books. Mr. Lin was taken to the Sanshui Brainwashing Center. Further details are unknown.

Mr. Chen Shuang was sentenced to seven years in prison by the Longgang District Court in July 2018. His appeal was rejected by the Shenzhen City Intermediate Court.

It was recently confirmed by Minghui.org that the prosecution evidence against him included a testimony from his relative Zhang, confirming that Mr. Chen practices Falun Gong; a person named Luo Maozhong accused Mr. Chen of making 13 banners with the words “Falun Dafa is good” on them. Some phone numbers were also found on Mr. Chen's computer.

Mr. Chen's lawyer argued that no law has ever declared Falun Gong illegal in China so his client should not be charged.

The Weidu District tried Ms. Hou Yinglian at the Xuchang Detention Center on the morning of June 26, 2019. The lawyer defended her not guilty and rebutted the prosecutor’s charges item by item. He said the court should release Ms. Hou.

Ms. Hou also defended herself during the trial and said she firmly believed there was nothing wrong with practicing Falun Gong.

The trial lasted over an hour but no decision was announced. Only three of Ms. Hou’s family members and relatives were allowed to attend the trial. Ms. Hou’s husband was not allowed to be present.

Ms. Qiang Weixiu was tried by the Zhenyuan County Court on March 12, 2019. She was sentenced to four years’ imprisonment. She is appealing to the upper authorities.

“Cooperating as One-body, Rescuing Fellow Practitioners, and Clarifying the Truth”