(Minghui.org) Falun Gong practitioners held a commemorative event on July 18, 2019, in front of the Chinese Embassy in Bratislava marking the 20th year since the start of the persecution of Falun Gong in China. 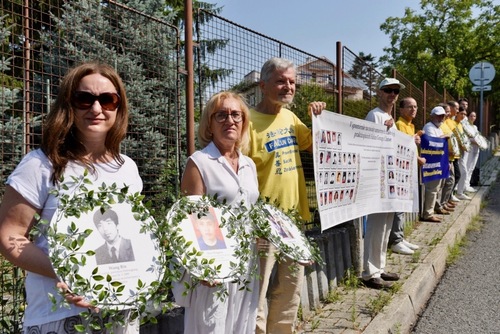 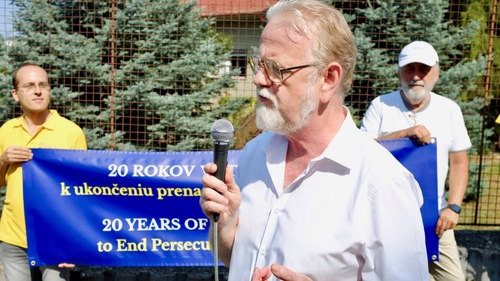 Marek Tatarko, chairman of the Slovak Falun Gong Association, noted in his introduction, “It is sad to say that since 1999, approximately 100 million people in China have been persecuted for being devoted to Falun Gong, the practice of meditation and exercises based on traditional principles of Truthfulness-Compassion-Forbearance.

“It will be 20 years since the persecution of Falun Gong in China began on July 20, 1999. The persecution in which people are unjustly arrested, tortured, imprisoned, and often lose their lives.”

Mr. Tatarko also mentioned the worrying facts revealed by David Kilgour and David Matas in their 2006 report “Bloody Harvest: Killing Falun Gong for Organs.” The report states that there are 60,000 to 100,000 organ transplants per year in China, and the source of organs cannot be explained. According to their investigations, the only plausible explanation is the use of Falun Gong practitioners as a source for these transplants.

Finally, Mr. Tatarko expressed the hope that the deaths of these people – and not only of them, but also of other victims of communist regimes – would not be in vain and that today, through their deaths, people could see the evil that is hidden behind the communist ideology.

In his speech Peter Osusky, Member of the National Council of the Slovak Republic, said that he knows several members of Falun Gong and that there are few groups in the world that live in truth and virtue like Falun Gong. He said he sees the need for solidarity with these people. Mr. Osusky ended his speech with these words: “So it is a duty of normal decent people to stand with you just as you stand for those to whom this is happening. I will come here as long as my feet bring me and my eyes lead me, always and again.” 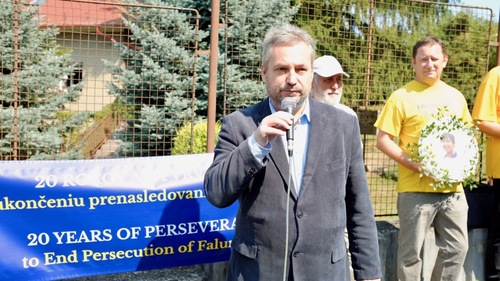 Ondrej Dostal, Member of the National Council of the Slovak Republic said in his speech that he is here to commemorate the 20 years since the beginning of the persecution of Falun Gong in Communist China. He said, “In China there are happenings of incredible things unworthy of the 21st century.”

He highlighted the conduct of the new Slovak president, Zuzana Čaputová, who condemned the violation of human rights at a meeting with the Chinese foreign minister and said that we should expect this attitude from our representatives.

Finally, Mr. Dostal added that he hopes that the persecution will end and that he will meet with Falun Gong practitioners on other occasions.

Renáta Kaščáková, Member of the National Council of the Slovak Republic, could not attend the event, but sent a note on the occasion of the 20th anniversary of the persecution of Falun Gong in China: “I add my voice of expressing solidarity with all people who are subjected to persecution and suffering for their faith. The testimonies of the drastic and inhuman treatment of Falun Gong advocates, their imprisonment, torture, and in particular the violent harvesting of their organs for profit against their will, does not leave me indifferent. They point to a clear and long-lasting evil that, when besides being done by fully conscious or even participation of members of the Government of the People’s Republic of China, is getting a monstrous measure on a global scale. That is why I appreciate all the initiatives to uncover it and stop it.”

The event continued with a full-time relay appeal for freedom for Falun Gong practitioners. 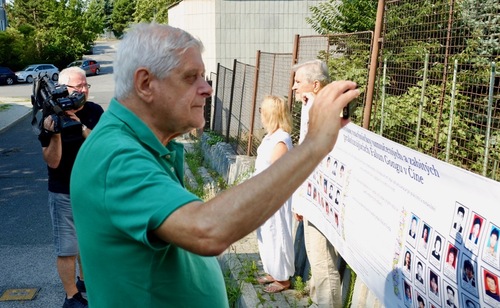 TV and Magazine journalists report on the event.

The event was attended by a national TV (JOJ) station, which broadcast news of the event on the daily evening news. A journalist from the local journal Tyzden also attended the event and wrote a report that was published on the journal's social media page.