Parade in Washington D.C. Calls for End of 20-Year Persecution of Falun Gong

(Minghui.org) Nearly 2,000 Falun Gong practitioners from across the U.S. held a parade on July 18 to commemorate the 20-year anniversary of the peaceful resistance against the persecution. Falun Gong, also called Falun Dafa, is a traditional mind-body spiritual discipline from China that has been brutally persecuted by the Chinese regime since 1999.

The parade began at Capitol Hill, moved along Pennsylvania and Constitution Avenues, and ended at the Washington Monument. 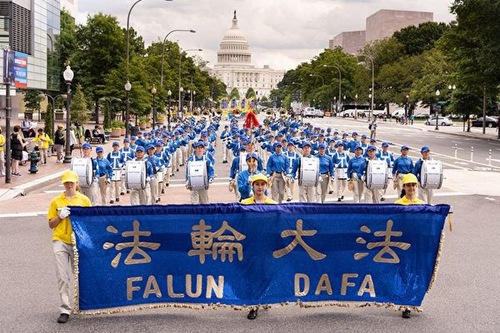 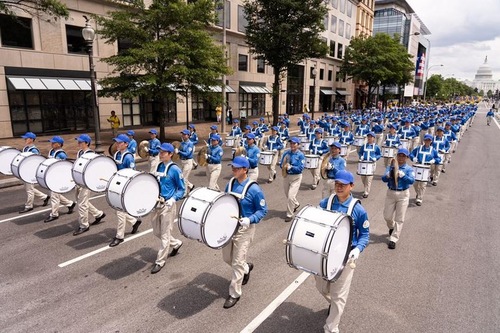 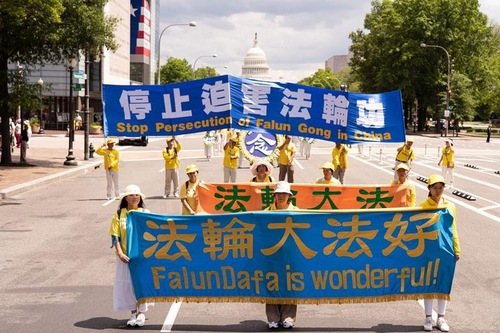 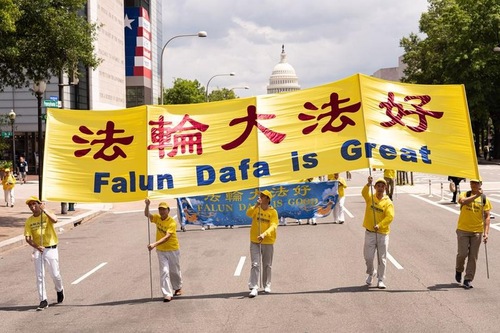 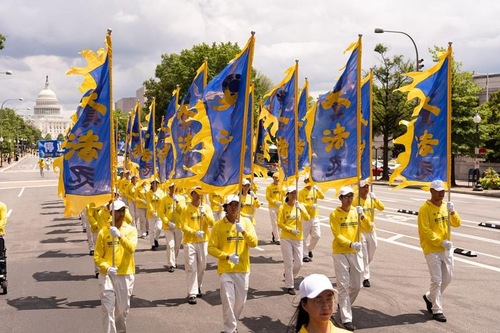 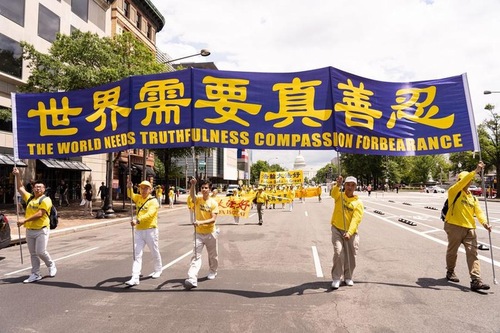 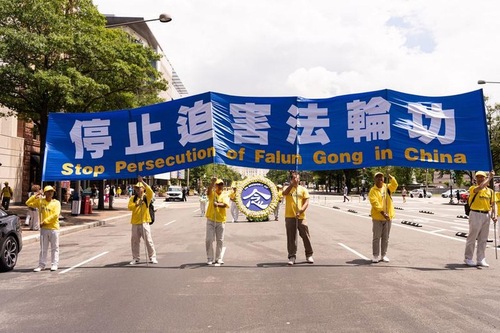 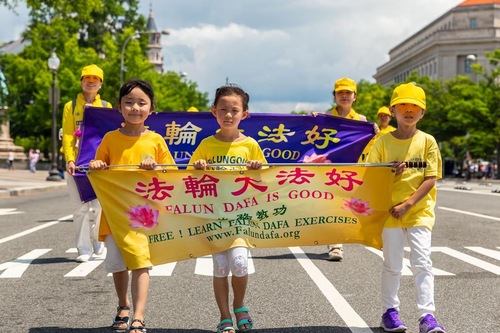 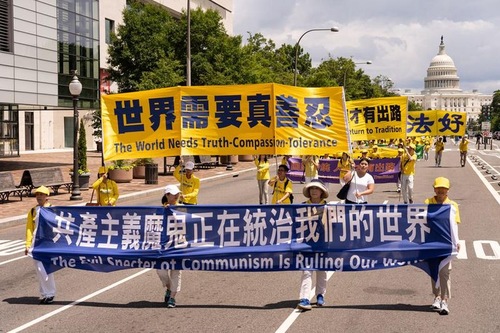 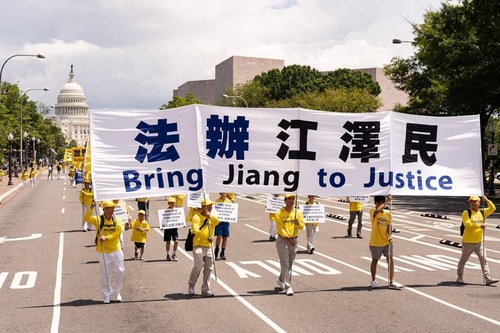 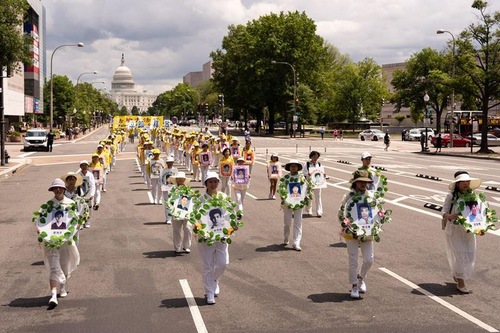 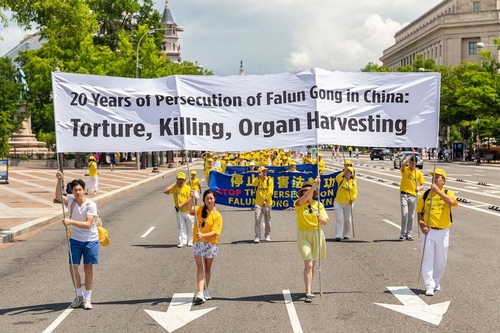 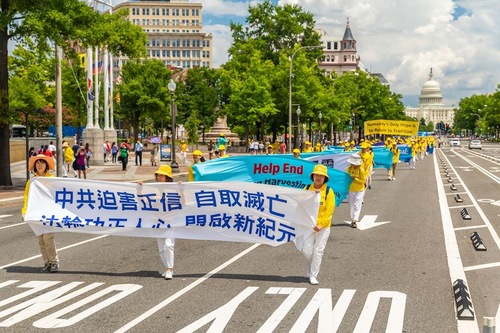 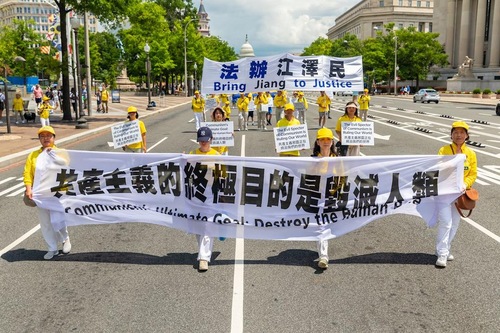 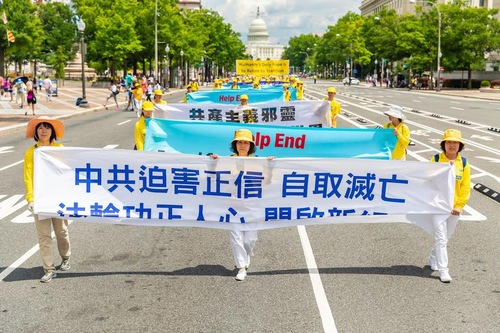 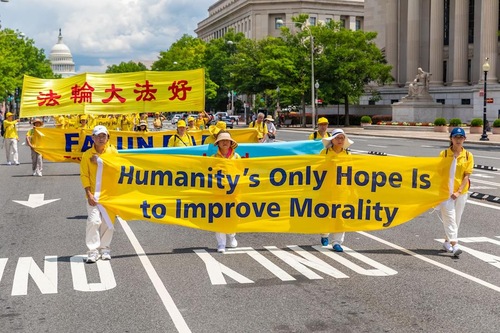 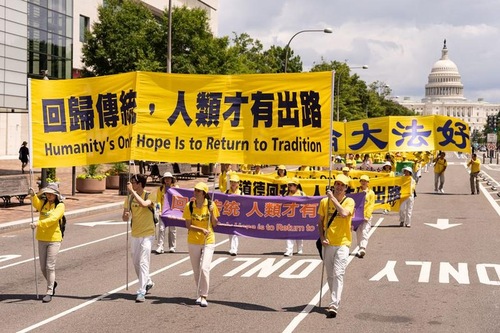 The first section of the parade was themed “The Beauty of Falun Gong,” and was led by the Tian Guo Marching Band and the colorful banner team. The second section exposed the brutal persecution, with practitioners carrying portraits of 80 fellow practitioners who lost their lives in the persecution. The third section called for the disintegration of the Chinese Communist Party (CCP), providing information about the 334 million withdrawals from the Party and the global lawsuits against Jiang Zemin – the former head of the communist regime who personally launched and directed the persecution

Hundreds of banners in the parade conveyed such messages as “The ultimate purpose of communism is to destroy humanity,” “The evil spirit of communism is ruling our world,” “Humanity's only hope is to return to tradition,” “Humanity's only hope is to improve morality,” “The world needs Truthfulness-Compassion-Forbearance,” and “Falun Dafa is great.”

The parade drew the attention of many tourists and local citizens.

Nateria, who works at a bank near the White House, heard the music and decided to leave her office to watch the parade. She heard about Falun Gong for the first time.

Nateria has started to pay more attention to Chinese affairs recently, because her daughter is going to attend classes in China for three weeks.

She was moved by the words on the banners. "I am from the former Soviet Union," she said, "so I know how the communist party treats people."

She sent a video of the parade to her daughter, and her daughter replied that she had heard about the persecution of Falun Gong in China. The young woman said that she would have liked to have joined the parade, had she been in Washington then. 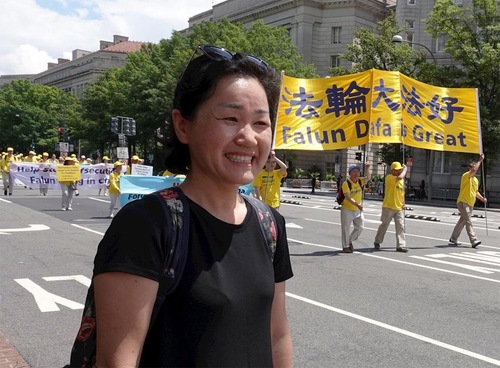 Ms. Hong from Korea was excited to see the parade. She followed the parade for a long time and filmed it. She has watched the Falun Gong exercise instruction videos, and planned to come to the local exercise site. 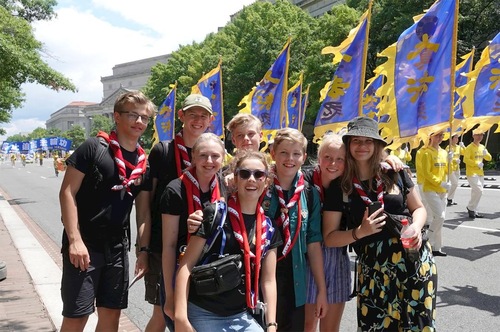 A group of students from Denmark enjoyed the music of the band. “It's a pleasure for eyes and ears,” said one. 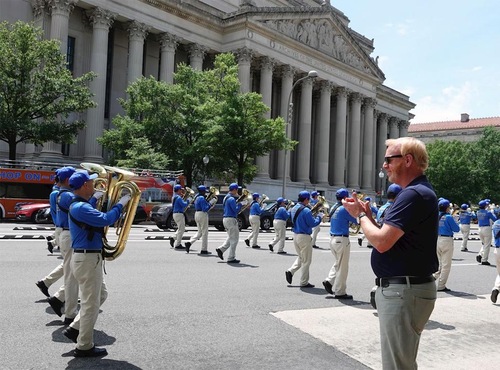 Brian from Texas enjoyed the parade. “This is a gift to me,” he said. “It's excellent!”

Brian from Texas already knew about the persecution of Falun Gong. “Falun Gong is great,” he said. “People should fight for their belief. Everybody has the right to enjoy freedom of belief. It is given by Heaven. No government should deprive people of this freedom.”

Brian said he looked forward to learning more about this self-improvement cultivation practice.

“Canadian Member of Parliament: Canada Should Be More Aggressive Against Human Rights Abusers”