Brother Dies of Torture, Sister Detained for the 6th Time for Their Faith in Falun Gong 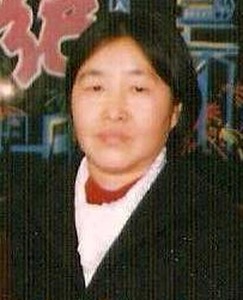 Ms. Wu Yuexia, a 62-year-old resident of Shuangyashan City, Heilongjiang Province is again being detained for her faith

This is the 6th detention for Ms. Wu due to her belief in Falun Gong. Her younger brother, Mr. Wu Yueqing, was also arrested numerous times and sentenced to 12 years in prison for practicing Falun Gong. As a result of the torture he suffered at Mudanjiang Prison, his lungs were damaged and a large cavity formed. His weight dropped to only about 35 kilograms (less than 80 pounds). He died while in his 30s on December 23, 2007.

Falun Gong, also known as Falun Dafa, is a meditation system composed of gentle exercises and the principles of Truthfulness-Compassion-Forbearance. After the Chinese Communist Party began to suppress the group, a large number of practitioners have been arrested, detained, and tortured.

Ms. Wu, a high school language teacher in Shuangyashan City, began to practice Falun Gong in December 1998. Before that she suffered from chronic headaches and leg pain. She tried all kinds of medication, folk medicine, and qigong systems, but none of them worked. Less than 20 days after she began to practice Falun Gong, these illnesses disappeared.

Following the principles of Truthfulness-Compassion-Forbearance, she also became more genuine and kind, both in family life and at work. She stopped complaining about her husband and did more household chores than before. At work, her workload was almost as much as two teachers—teaching senior classes as well as lower grade classes. She did not receive extra pay for that, and the senior classes she taught were ranked among the city's best. Students liked her, and other teachers as well as school officials were also impressed by her changes. Many of them joined the practice and with support from the school, they were able to do exercise indoors on cold winter days.

After the persecution of Falun Gong started in July 1999, police, school officials, and community leaders harassed her every now and then. Because of going to Beijing to appeal, she was fired by her school.

When Ms. Wu returned after going to Beijing to appeal three times, police officers often came to harass her. She had no choice but to stay away from home for over half a year. In March 2000, she was arrested and kept at the Shuangyashan Detention Center, where she was infected with scabies for four months. After she went on a hunger strike for 7 days, officer Zhu Yaru told male inmates to drag her every day to the hallway for force-feeding.

Ms. Wu's second arrest occurred in December 2006, during which Chen Zhen from Baoshan 610 Office kept her at the same detention center for 8 days. When she went on a hunger strike to protest and family members requested her release, officials extorted money from the family in exchange for her release.

Agents from Baoshan 610 Office went to her home again at 6 a.m. on September 28, 2017. They took her away and, without going through legal procedure, sent her to Xigemu Labor Camp in Jiamusi City.

As soon as she was brought to the labor camp, the guards ordered her to sign documents to renounce Falun Gong. When she refused, a group of officers rushed over to her and forcibly grabbed her hands to sign the documents. One officer hit her in the head and caused bleeding in the back of the neck. She was also forced to do slave labor.

When Ms. Wu was in the labor camp, her brother Mr. Wu Yueqing was released from Mudanjiang Prison on medical parole. Mr. Wu had been sentenced to 12 years of imprisonment and his health continued to deteriorate, which led to his death on December 23, 2007.

Ms. Wu was arrested a fourth time in July 2011 for distributing Falun Gong materials and kept at Jixian Detention Center for 15 days. As she refused to give up her belief, Du Zhanyi and other officials from Shuangyashan 610 Office secretly sent her to Wuchang Brainwashing Center. 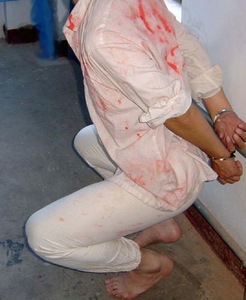 Torture illustration: Handcuffed in the back to heating pipes

Inside the brainwashing center, she was severely abused both physically and mentally. Upon arriving there, she was ordered to write five statements to stop her practice and renounce Falun Gong. When she refused, guards handcuffed her in the back to heating pipes in an awkward position, such that she could neither sit nor stand.

After 24 hours, Ms. Wu found her right leg to be numb and difficult to move. As she continued to refuse to give up her belief, six male inmates tied her up, covered her mouth, and pushed her head down. Then someone grabbed her hand to sign the documents. One inmate then read the statements loudly in the cell.

This was followed by brainwashing every day, including watching videos and reading materials that slandered Falun Gong. When she refused to write articles to defame Falun Gong, inmates held her hands forcibly to write such phrases. Ms. Wu wasn't released until one month later.

When visiting another practitioner on October 14, 2014, Ms. Wu was arrested by over 10 officers from Xiangyang Police Station. Police sent her to the Shuangyashan Detention Center on the next day and ransacked her home in the evening. They confiscated Falun Gong books, a portrait of Falun Gong’s founder, a printer, and computers.

Ms. Wu's latest and sixth arrest happened on June 20, 2019. The police ransacked her home and confiscated her husband's computer.

“Chinese-Japanese Woman Suddenly Widowed While Held in China for Her Faith in Falun Gong, Supporters Call for Her Release”