Toronto, Canada: Candlelight Vigil Outside Chinese Consulate Commemorates Those Who Have Died in the Persecution

(Minghui.org) Falun Gong practitioners held a candlelight vigil in front of the Chinese Consulate in Toronto on July 13, 2019, to mark 20 years of persecution in China and to commemorate the practitioners who have lost their lives.

The Chinese Communist Party (CCP) officially initiated the persecution of Falun Gong on July 20, 1999, with a violent nationwide crackdown that continues to this day. 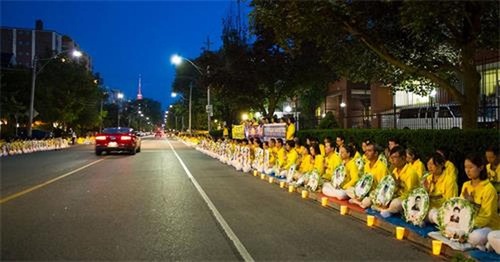 Candlelight vigil in front of the Chinese Consulate in Toronto on July 13, 2019.

The Candlelight Vigil Is Meaningful

Justin Adam is the CEO of a creative advertising company in Toronto and lives near the Chinese Consulate. He had been walking after dinner when he came across the practitioners’ vigil. He sat down on the lawn to watch it.

“I came across this by coincidence again this year,” he said. “It is in the same location as last year.” He said he thought the vigil was meaningful and wished more people knew about the persecution of Falun Gong. He said it is terrible that the CCP’s persecution has lasted 20 years.

He said that the CCP regime likes to struggle, which is in stark contrast to the peaceful practice of Falun Gong. He thought that people would help to stop the persecution once they learned about it. 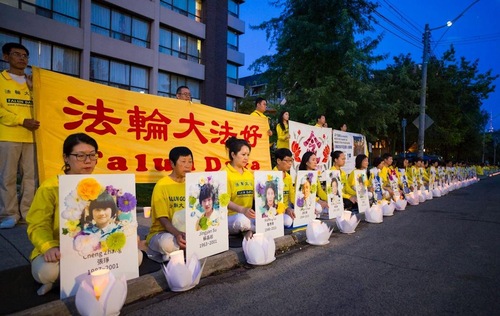 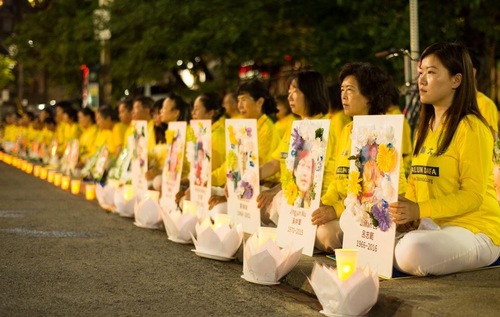 The candlelight vigil commemorating Falun Gong practitioners who were persecuted to death by the CCP.

Chinese Student: The CCP Does Not Equal China

A Chinese student with the family name Zhao passed by and listened to a practitioner explain the event and said, “I think the CCP’s persecution is too cruel.”

He said he did not know much about the persecution in China. “I don’t think the CCP is the same as China. I think the CCP is too evil. I thus agreed to renounce the Young Pioneers (a Communist Party organization).”

Another Chinese student from the University of Toronto passed by. It was his first time to see practitioners holding a candlelight vigil.

“I fully agree with the information on the flyer – China does not equal the CCP,” the student said, “I have read a lot of news after coming to Canada that I could not see or hear about in China. The true information is censored.”

Miranda, a Chinese Canadian who lives nearby and has seen Falun Gong practitioners’ events many times said, “I know Falun Gong. The CCP is persecuting good people.”

She signed a petition calling on the Canadian government to help stop the persecution. She encouraged practitioners to continue raising awareness until the persecution ends.

Tourist from Mexico: Where Can I Learn More About Falun Gong? 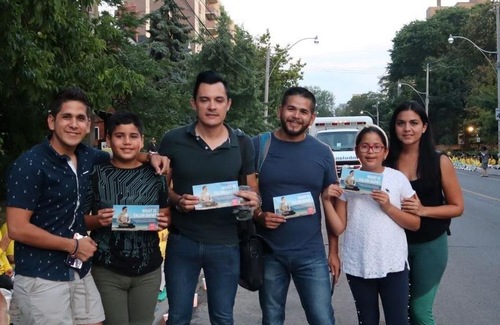 Moises (third from left) and his family

Moises and his family from Mexico paused to watch the event. It was the first time they had heard about Falun Gong. After being told about the benefits of practicing Falun Gong, Moises asked, with a flyer in his hand, “Where can I learn more about Falun Gong?”

He was told that the Falun Gong websites are available in multiple languages. He said he would read in his language. He then translated what the practitioner had told him to his family members.

A Toronto Resident: Falun Gong Practitioners Should Have Freedom of Belief 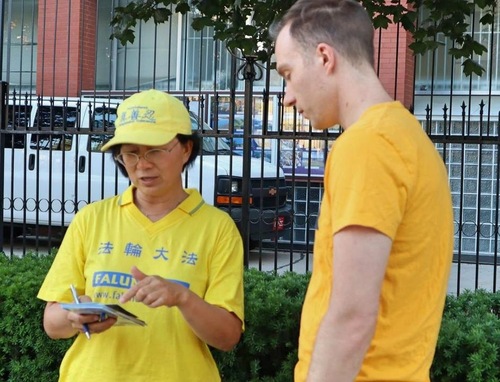 Jesse, a Toronto resident, passed by the candlelight vigil and accepted a flyer. He spoke with a practitioner about the event and then said, “This is my first time to learn about Falun Gong.”

After hearing that the CCP has persecuted Falun Gong for 20 years, Jesse said, “The persecution is terrible because everyone should have their freedom of belief. The Chinese government should not control people’s thoughts. People should practice Falun Gong freely.”

“Master Li Has Taken Me on the Path to Heaven”