Torture and Brainwashing of Falun Gong Practitioners in Suzhou Prison

(Minghui.org) Suzhou Prison in Anhui Province is a provincial correctional facility that traditionally houses serious male criminal offenders. Since the Chinese Communist Party began its persecution of the Falun Gong spiritual discipline in 1999, thousands of male practitioners in Anhui have been imprisoned here.

The Anhui 610 Office and prison authorities set up a section in the 13th Division for the purpose of “transforming” detained Falun Gong practitioners into non-believers. Until a few years ago, all newly arrived practitioners were first placed in this division for three months of intense brainwashing, solitary confinement, prolonged standing, and other forms of torture. Many gave up Falun Gong because of the tremendous pressure.

At the end of the three months, the practitioners were moved to other divisions to perform hard labor alongside criminal inmates. They worked long hours for six days a week and were monitored around the clock. The practitioners were subjected to physical abuse and bullying by guards and criminal inmates. Before they were released, they were taken back to the 13th Division to repeat the “transformation” process.

Huang Qijun, head of the 13th Division, used psychological tactics to instill fear, deceive, threaten and blackmail practitioners into agreeing to stop practicing Falun Gong. His 20 years of experience in “transforming” practitioners have gained him a high position in Suzhou Prison and fame among his peers nationwide.

Though the “transformation” process at Suzhou Prison has been modified since 2016 to avoid unwanted outside attention for the inhumane treatment of Falun Gong practitioners, the physical and mental torment continues in all divisions.

When a practitioner arrived at the Suzhou Prison, he was first placed in the 13th Division for three months of intense brainwashing. From Monday to Saturday, the practitioners were made to sit on the floor and watch television programs slandering Falun Gong. They sometimes were forced to read texts by Communist leaders or scriptures of other Buddhist beliefs.

When it came to steadfast practitioners, the prison guards called their hometown police stations and asked that officers be sent to the practitioners' homes to harass and threaten their families into pressuring the practitioners to “transform.”

Even if a practitioner had already “transformed,” he was taken to the 13th Division at the end of his term to go through the process again before being released. He was threatened not to tell anyone about his experience there or send any information to the Minghui website or he would be arrested again by the local 610 Office.

The practitioners were put through intense brainwashing during the day for six days a week. At night and on Sundays, they were confined individually in small cells and were made to stand for long hours.

The solitary confinement cells at Suzhou Prison have high ceilings extended into the second floor. There are no windows besides small openings in the ceilings. When it snowed outside, the snowflakes fell into the cells. Criminal inmates assigned to monitor Falun Gong practitioners were stationed in the corridors on the second floor where they could see into the cells.

The small cells were also used occasionally to confine inmates who broke the prison rules, as well as practitioners who had already been transferred to other divisions but were caught doing the Falun Gong exercises or talking to others about the practice. 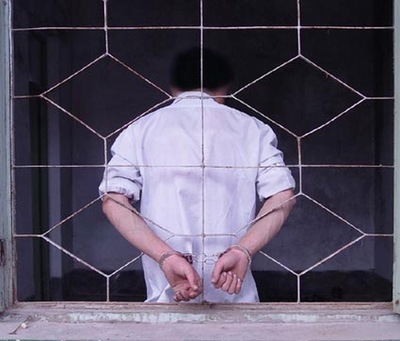 Standing for long periods of time caused a lot of physical pain and was the hardest to endure. For every hour that a practitioner stood, he was allowed to sit down on the floor for half an hour before resuming. Hour after hour, day after day, many broke down and gave in because they couldn't endure the physical abuse.

While confined to the small cells, the practitioners' sole source of water was the squat toilet where the water came in a small, steady stream. They used a hand towel to stop the water toward the back of the long toilet and formed a small reservoir where they took water for drinking and cleaning. To avoid contaminating the back of the toilet, they carefully aimed at the front when they used the toilet so that no urine or feces touched the back.

The bedding was usually damp and dirty. It was rolled out on the cement floor at night for sleeping. During the winter months, the temperature was often below freezing, making it impossible to fall asleep. The extreme weather, lack of sleep, poor nutrition, and prolonged standing contributed to the practitioners' deteriorating health. Some couldn't walk after a while and sometimes passed out.

Huang Qijun is the head of the 13th Division. Assistant head Yao Song and Wang Daliang are former division heads. Even after being replaced, they remained in the division as one of the key persons overseeing the “transformation” process.

Huang used to take practitioners' families into a separate room after visitations. He slandered Falun Gong to find out if the relatives were also practitioners.

If they were, he used this against the imprisoned practitioner and threatened to have their family members arrested if they didn't renounce the practice. Even if the family members were not practitioners, he made sure they knew the kind of power he had over their detained family members so that they would bribe him with money.

Before letting a practitioner into the visitation room, Huang threatened him and told him what he could say. He had prison guards listen in on the phone conversations between practitioners and their families. As soon as they mentioned sensitive subjects, the guards cut off the line and ended the conversations.

Some families even thanked Huang repeatedly before leaving, asking him to take care of their family members. However, the truth was far from what the families were made to believe; in fact, the practitioners were kept in solitary confinement, tortured, and not allowed to buy daily necessities, such as a bar of soap.

Huang is from Wuwei County, Anhui Province. He was born in 1963 and graduated from the Anhui Police Academy in 1986.

He wrote a 500,000 Chinese character handbook on the subject of transforming Falun Gong practitioners, which is now widely used by brainwashing centers throughout China. Huang partnered with a female guard, and they traveled to many cities to help set up brainwashing centers. He has been in Hefei City eight times.

When Suzhou Prison still had a women's ward, Huang transformed many female practitioners by pretending to care about them. Some female practitioners had lost their families and been imprisoned for years; having been in an isolated environment for so long, they became easy targets for Huang.

Huang is especially vicious toward unyielding practitioners. An inmate who had been incarcerated at Suzhou Prison for more than a decade witnessed Huang and a criminal inmate beating and kicking practitioners Liu Jihong (from Hefei City) and Ge Xiliang (from Mengchen County) to death. When their bodies were carried out of the building, Huang claimed that they had died of illness. The inmate who helped Huang had his sentence reduced and was released soon after.

Huang also placed spies in all other divisions to monitor practitioners after they were transferred out of the 13th Division. If they read Falun Gong books, did the exercises, or as much as talked to people about the practice and were caught, they were sent back to the 13th Division, where they were beaten or tortured. They were handcuffed, shackled, and confined in solitary cells. Many practitioners died from torture while the spies had their prison terms reduced.

Huang has donated a few hundred yuan to children in poverty and to Wuwei County, his hometown, when there was a natural disaster. He boasted about his “achievement” everywhere he went and was awarded the title of one of “The 10 Kindest People in Suzhou.”

After the initial three months of intense brainwashing, a practitioner would eventually be transferred to another division even if he had not “transformed,” as he would be used to perform hard labor alongside other prisoners.

The majority of the products made at Suzhou Prison were clothing and luggage. The work days were from 6 a.m. to 7 or 8 p.m. Prisoners were given a one-hour lunch break. If the inmates didn't meet their daily quotas, they would have to work overtime and return some of the benefits they had accumulated. Falun Gong practitioners were not required to meet any quotas, but they were still made to work the same hours and do the same work.

Like everyone else, the practitioners got up early and then went to work for 13-14 hours until they were too tired and hungry to do anything else except eat and go straight to bed.

Each practitioner had multiple inmates assigned to monitor him around the clock and was not allowed to talk to anyone. Because they don't swear or fight back when attacked, some criminal inmates bullied practitioners for entertainment.

Everyone took turns to carry big buckets of food to each division during mealtime. The elderly or sickly who couldn't carry these big buckets needed help from others and were often beaten unless they paid money. Some elderly practitioners who didn't have money suffered a lot.

The cost of food was 140 yuan per month, and the inmates usually received cheap vegetables such as bean sprouts, wintermelons, and cabbage. It was clear that the 300-yuan living expense per practitioner per month paid by regional 610 Offices were not all used on the practitioners.

This also revealed that although the practitioners had been sentenced to prison, they were technically not registered prisoners. They were sent there by the local 610 Office to be “transformed.” This was the suspected reason that they didn't have a labor quota and were not paid for their labor.

Harassment and Monitoring Continue After Release

Before the practitioners were released, the 13th Division notified their local 610 Office, Community Party Committee, and Comprehensive Management Office to pick up the practitioners from prison. The families, however, were not notified as legally required.

Practitioners’ transformation progress, behavior, and even their families' attitude were reported in a written document and burned onto a CD to be passed on to the local authorities when they picked up the practitioner so that the “transformation” process could continue.

There have been cases where unyielding practitioners became seriously ill shortly after being released from Suzhou Prison, and some even passed away. It is speculated that they were given unknown drugs in their food or drinks before being released, but this has yet to be confirmed.