(Minghui.org) A woman imprisoned for refusing to give up her faith in Falun Gong was hospitalized on July 5, 2019 and operated on the following day without her family's consent. When her family refused to sign a waiver to take her home, the police detained them, including a six-year-old child, for one day.

On July 12, authorities took her off oxygen when her family was not around, and she died. They are now demanding that her family negotiate compensation terms before revealing where her body is being stored.

Key Events in the Days Leading Up to Ms. Li's Death

Ms. Li Changfang from Linyi City, Shandong Province, was arrested on October 23, 2018, for refusing to renounce Falun Gong, a mind-body practice that has been persecuted by the Chinese communist regime since July 1999. She was sentenced to two and a half years and fined 10,000 yuan on March 27, 2019.

On July 5, 2019, her family rushed to a local hospital after being notified that her condition was life-threatening. Ms. Li was alert and said she had been suffering from abdominal pain for 15 days. She had bruises on her thighs, and her teeth were loose. 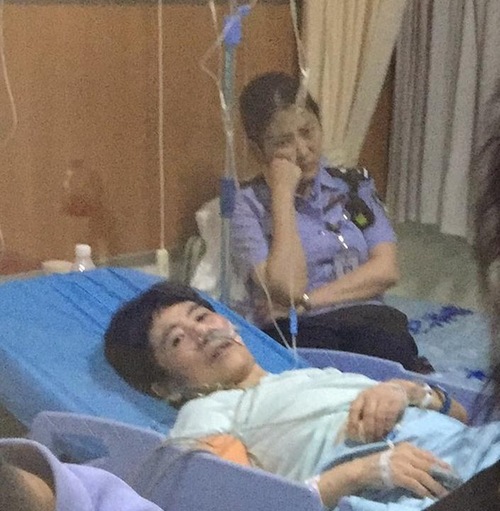 The guards at Linyi City Detention Center where Ms. Li had been detained refused to explain what had happened to her that may have resulted in her medical condition and injuries. The doctors at first claimed she had appendicitis and then said she had a gastric perforation.

With so many questions unanswered, Ms. Li's family refused to sign a consent form to agree to surgery.

Directed by the detention center and the police, the doctors still operated on Ms. Li, cutting her open from her chest down to her abdomen on July 6. She never regained consciousness and remained connected to a ventilator after the surgery, which her family doubted was needed to treat abdominal pain.

On the morning of July 10, more than two dozen officers descended on the hospital. When her family refused to sign a waiver to have her discharged from the hospital, the police arrested her husband, son, daughter, and six-year-old grandson. They weren't released until the following day.

At around 6 p.m. on July 12, when her family was not present, agents from the Linyin City Detention Center and Dongguan Police Station in Linyi City showed up in Ms. Li's ward and removed her oxygen supply. She died shortly afterward.

During a brief hearing in the detention center on January 24, 2019, the prosecutor charged Ms. Li and five other practitioners with “undermining law enforcement with a cult organization,” a standard pretext used by the Chinese communist regime to frame and imprison Falun Gong practitioners. On March 27, 2019, Ms. Li was sentenced to two and a half years in prison and fined 10,000 yuan in the Yinan County Court. Three other practitioners and two non-practitioners were also sentenced.

Surgery Without Family Consent and Coma

At 10 p.m. on July 5, 2019, a Linyi City Detention Center officer called Ms. Li's family to say that she had been taken to Linyi Hospital and that a family member’s signature was needed so that she could have surgery.

Ms. Li's loved ones rushed to the hospital and saw her lying in bed with a severely swollen stomach. Large areas of her thighs had turned purple, and her teeth were loose. Ms. Li said she had been suffering from abdominal pain for 15 days. When her family members tried to take pictures of her, about 20 plainclothes officers rushed in and forced them to delete the pictures.

Ms. Li was operated on July 6 without her family's consent. With so many of her family members present, an officer said only one relative was allowed to see her and that the visit was limited to 20 minutes. Ms. Li's son noted that she had been opened up from her chest to her stomach, and he wondered why her chest needed to be opened when the doctors claimed she’d had appendicitis and gastric perforation.

When Ms. Li remained in a coma, the doctors claimed it was the result of multiple organ failure and hooked her to a ventilator in the intensive care unit (ICU). Quite a few plainclothes officers were present to search anyone who wanted to visit her. They also refused to allow Ms. Li's family access to her medical record.

On July 9, a Linyi City Detention Center officer called officials in Ms. Li’s village, asking them to come take her home because she was dying.

Officials from both the Yinan Justice Department and the detention center came to the hospital in five police vans on July 10, demanding that Ms. Li's family sign a waiver and take her out of the hospital. When her family refused, plainclothes officers began to arrest them and beat them. When Ms. Li’s son, Wang Xiaofei, went to bathroom, an officer cornered him and beat him severely.

Mr. Wang managed to escape and called for help: “My mother is in a coma because of the police, and now they are beating me!” He told other patients how his mother was arrested and sentenced to prison for her faith in Falun Gong and how she was operated on without the family’s consent. He also told everyone that their family was never told the true cause of his mother's medical condition.

Other patients and their families asked for details, and some took pictures with their phones. Ms. Li’s family took pictures of the officer who beat her son. The officer lied and said he was a regular patient. When other plainclothes officers had their pictures taken, they also lied, saying they were patients who were visiting the hospital. When people started to reprimand the officers, they left in police vans.

A Yinan County Court official later contacted Ms. Li’s family to negotiate the situation. The family asked that Ms. Li's wrongful conviction for her faith in Falun Gong be overturned and that those involved in persecuting her be held responsible. The official said the issue of Falun Gong was beyond the scope of the discussion and refused to offer an explanation, although Ms. Li and other practitioners were sentenced for their belief in Falun Gong.

When Wang Xiaofei went to the ICU at 2:30 p.m. on July 10 to visit his mother, three police officers followed him and stopped him from taking pictures. Half an hour later, over 10 officers from the Dongguan Police Station arrived. They and an officer surnamed Ding from the detention center arrested Ms. Li’s family, including Wang Xijie (Ms. Li’s husband), Wang Jiao (Ms. Li’s daughter), Wang Jiao’s 6-year-old son, Wang Xiaofei (Ms. Li’s son), and another relative Peng Hui. One of the vehicles was from the Linnan County Court (license plate of QA368) and three were from Dongguan Police Station (license plates of Q6012, Q3888, Q3977).

Ms. Li’s family suspects she was poisoned by unknown drugs. When she first got to Linyi Hospital on July 5, her mind was clear and she told them what had happened at the detention center that resulted in her abdominal pain: She had been forced to take some kind of medicine several times and was injected with unknown drugs once. The day after the injection, she ached, and from the waist down her skin was reddish and swollen and then turned purple. She had abdominal pain, her belly was swollen, and the inside areas of her thighs turned purple and were extremely painful.

When her family raised the question of drug poisoning, a doctor in the hospital said it could be a skin disease or an infection. When they questioned the doctor further, the doctor made contradictory statements and denied them access to her medical record and exam results.

Ms. Li's husband, daughter, and grandson were released on the morning of July 11, and her son returned in the afternoon. While the family was detained, officials from the Linyi City Detention Center and Dongguan Police Station tried to press them to sign a waiver so that Ms. Li could leave the hospital. They said compensation would be provided.

In the absence of any family members, officials from the detention center and the police station stopped the oxygen supply and other forms of life support connected to Ms. Li in the ICU on July 12.

After having Ms. Li's body removed, they called the family at 6 p.m. that day. When the family arrived at the Guandong Police Station at 10 p.m., no officers were available to receive them.