(Minghui.org) Falun Gong practitioners participate in local community events to introduce the practice and raise awareness of the Chinese Communist Party's (CCP) persecution. During these events practitioners usually demonstrate the exercises, talk to people about the benefits of Falun Gong (also called Falun Dafa), and collect signatures from people who support Falun Gong and wish to condemn the persecution in China – especially the CCP's state-sanctioned live organ harvesting from imprisoned practitioners.

The following events were recently held in Germany, the Netherlands, and New Zealand.

Falun Gong practitioners were invited to participate in the 21st annual Muensterstraßenfest, a popular festival that highlights cultural diversity, on July 6, 2019. They demonstrated the exercises on the festival stage.

The audience warmly applauded when practitioners introduced this ancient spiritual practice and began doing the exercises. Many people stood up to get a better view of the demonstration. 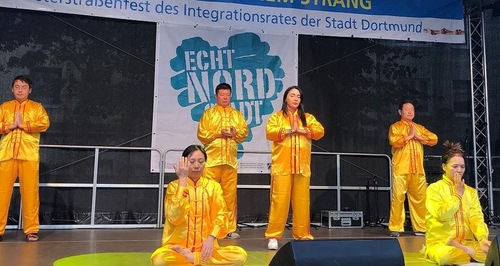 Falun Gong practitioners demonstrate the exercise on stage during the Muensterstraßenfest held on July 6, 2019 in Dortmund.

The popular festival was well attended and many people watched the exercise demonstration. 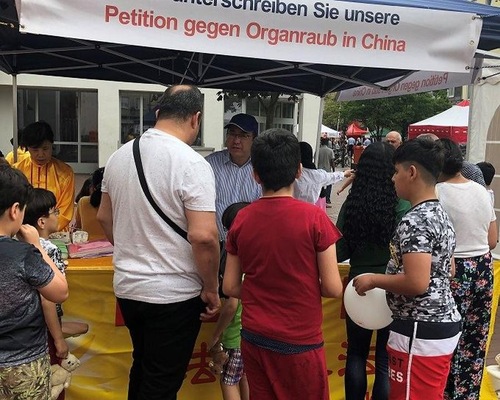 The Falun Gong stand drew a number of festival-goers.

A mother and daughter stopped at the Falun Gong booth after the exercise demonstration. The daughter, a high school student, had written an article about China’s human rights issues. She was concerned about the CCP’s persecution of Falun Gong and asked several questions. When she and her mother learned the extent of the brutality taking place in China, they were shocked and signed the petition to condemn the persecution.

Falun Gong practitioners were invited to participate in the Five-Hundred-Year Anniversary celebrations in Veenendaal, Netherlands on July 6, 2019. They demonstrated the exercises, and the Tang waist drummers performed on stage. They also had an informational booth to introduce the practice to the public. 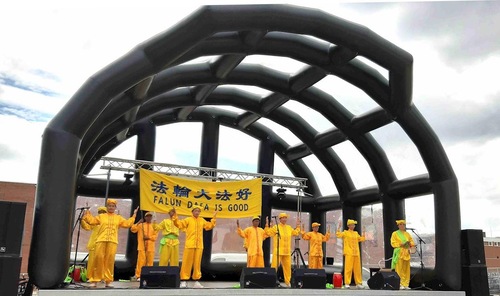 Falun Gong practitioners demonstrate the exercises on stage in Veenendaal, Holland on July 6, 2019. 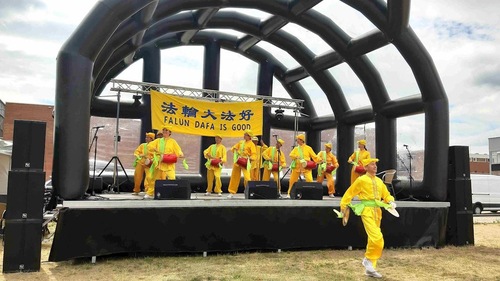 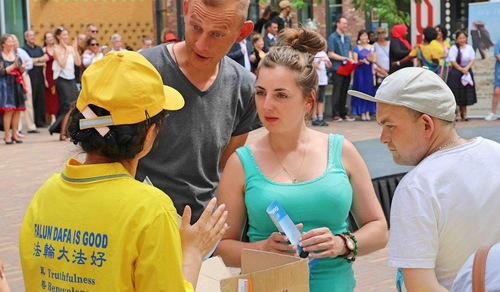 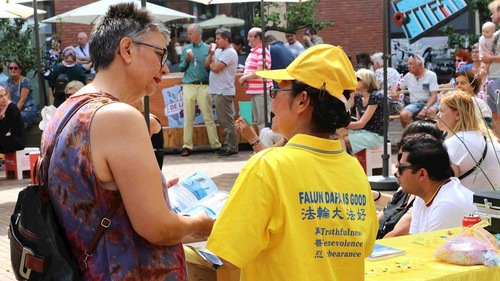 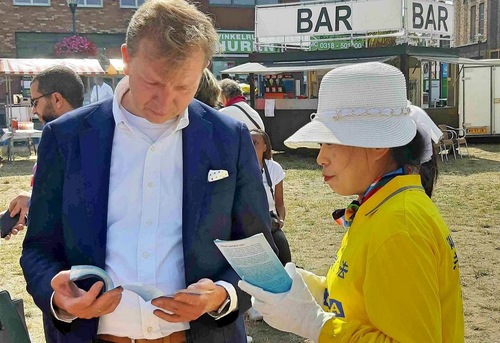 Many people were interested in Falun Gong and stopped by the practitioners' booth. Mayor Gert-Jan Kats also talked with practitioners and asked several questions about the CCP’s persecution in China. He said he wished to learn more about Falun Gong.

Falun Gong practitioners introduced the ancient spiritual practice to the public at the Taupo market on July 6, 2019. As part of the day's events, they demonstrated the exercises, did the popular dragon dance, and had an information stand. Many people stopped by and asked about Falun Gong. 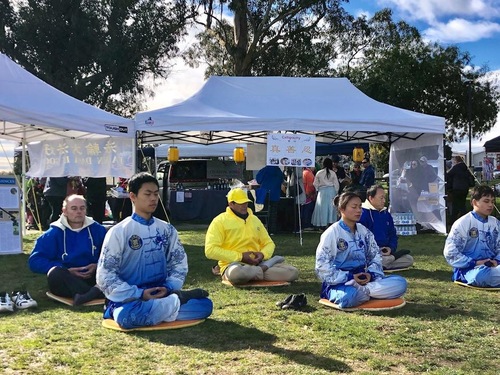 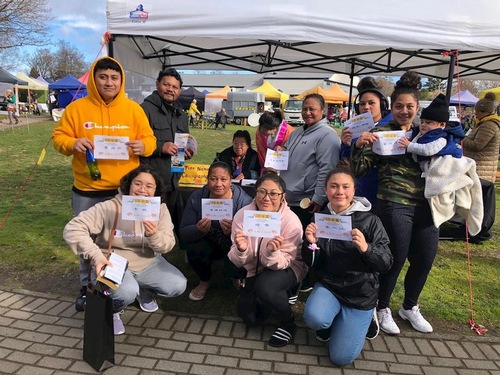 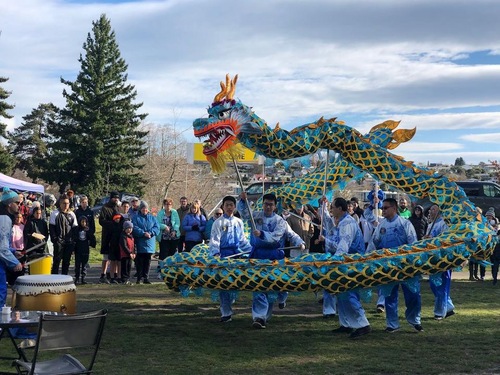 Monika Geister, the market coordinator, moved to New Zealand from Germany many years ago. She said, “I feel peaceful and serene when I pass by the Falun Gong booth.” She also remarked that she felt the positive energy of the dragon dance team. 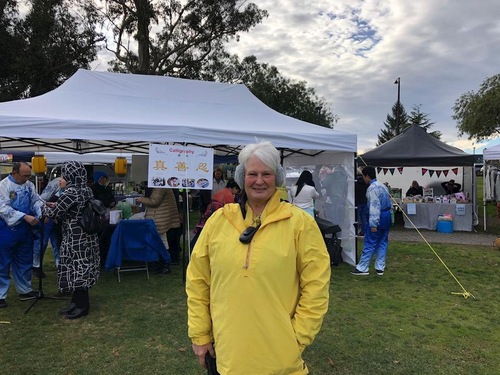 Monika Geister, coordinator for the Taupo market, said she was very moved by the practitioners' message. “Truthfulness-Compassion-Forbearance is what the world needs now!”

Monika said, “Truthfulness-Compassion-Forbearance. This is what the world needs now! Especially the forbearance.”

Ms. Geister said that everyone wished to live in peace. She sincerely appreciated the practitioners' participation in the market and hoped they would come back. 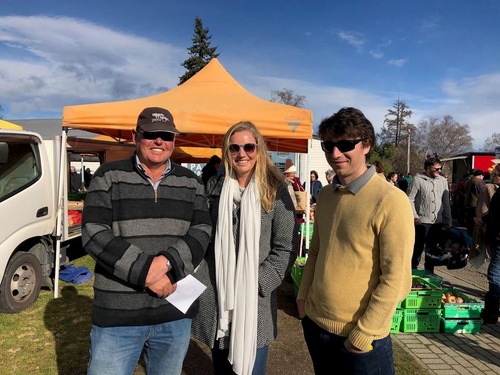 Richard Blackmore and his family especially loved the dragon dance. They were shocked to learn that such a peaceful practice is persecuted in China.

Richard Blackmore, his daughter Amy and son-in-law Joe especially loved the dragon dance performance. They were pleased to see practitioners participating in the market and introducing Chinese traditional culture.

Mr. Blackmore and his family were shocked to learn that the CCP has persecuted Falun Gong for 20 years and conducted live organ harvesting from prisoners of conscience for profit. They mentioned that they were paying attention to the situation in Hong Kong and hope that the human rights plight in China will improve. 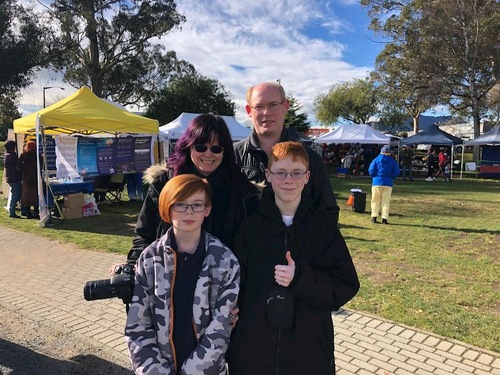 Ryan, his wife Tracy and their children, Ethan and Liam stopped to talk with practitioners. Tracy took several photos of the practitioners' performances and said they felt very lucky to see practitioners demonstrate the exercises and perform the dragon dance.

“Artists, Musicians, and Poets Persecuted for Their Belief in Falun Gong (Part 4)”