(Minghui.org) Today's news from China includes incidents of persecution that took place in 11 cities or counties in 8 provinces，where at least 18 practitioners were recently persecuted for their belief. 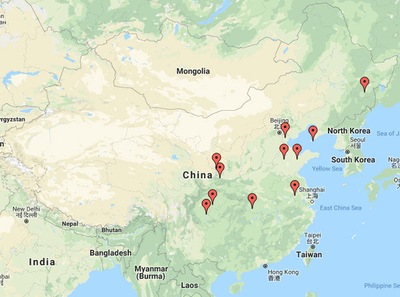 Ms. Zhou Yuye, around 50 years old, was arrested in late May 2011. She was held in the Masanjia Forced Labor Camp, and released in March 2012. Due to the severe abuse she suffered in the camp, she never recuperated. She collapsed mentally, locked herself in her room, did not eat or drink, and finally passed away in distress.

Ms. Yang Wei, 52, was arrested by officers from the Tianxiadiyiquan Police Station on the afternoon of June 12, 2019. When her family went to the authorities to ask for her release, they were told that she had been taken to a detention center.

Ms. Zhang Guiyun, in her 60s, from Xuefu Street in the Nankai District, was arrested by officers from the Wangdingdi Police Station on April 19, 2019. Her home was ransacked. She was held in the Nankai Detention Center for over two months.

Ms. Zhang was previously incarcerated in the Tianjin Women's Prison.

Ms. Pan Chengying, Ms. Chen Hongying, and Ms. Wang Bihong were reported to authorities for talking to people about Falun Gong on June 24, 2019. They were arrested by officers from the Shiqiu Police Station.

Ms. Pan, Ms. Chen, and Ms. Wang have been placed under criminal detention, and are being held in the Nanjing City Detention Center.

Ms. Wang Guaiyan was reported to the authorities for talking to people about Falun Gong on the afternoon of June 24, 2019. She was arrested by officers from the Jiangtanlu Police Station. Her home was ransacked.

Ms. Dong Shuyan, Ms. Guo Shuzhen, and Ms. Zhang Yuhua were arrested by officers from the Tielinghe Residential Community Police Brigade on the evening of June 21, 2019. Their homes were ransacked. They were taken to the Mudanjiang City No. 2 Detention Center. Families of the three practitioners went to the detention center to take them clothes and money, but the officials refused to accept them.

Four officers from the Dong’an Police Department went to Ms. Dong’s sister’s home and harassed her and her family on June 25. They took Ms. Dong’s sister and brother-in-law to the police department and interrogated them. They threatened the couple, and said that if they continued to ask for Ms. Dong’s release they would be arrested too.

Eight or nine officers led by the chief of the Aimin Police Department went to Ms. Shao Yan’s parents’ home and ransacked it on June 25. They didn't find anything incriminating, and instead took the female caregiver of Ms. Shao’s bedridden father.

Ms. Ma Zhaohui from Jingning County was reported to the authorities when she was posting Falun Gong materials on June 15, 2019. She was arrested by He Xiaofeng, director of the Lidiian Police Station, and other officers. Ms. Ma was transferred to the Jingning Domestic Security Division.

He Xuefeng, head of the Domestic Security Division, and other officers went to Ms. Ma’s home and ransacked it. They confiscated a deposit receipt of 240,000 yuan, and some cash. Ms. Ma was then taken to the Jingning Detention Center.

Approximately twelve plainclothes officers broke into Ms. Liu Wangquan’s home on the morning of June 19, 2019. They confiscated a computer, printer, and some paper bills with Falun Gong information printed on them.

Mr. Liu, 66, worked in the Industrial and Commercial Department before he was fired for his belief in Falun Gong. He was previously arrested by officers from the Weiyuan Domestic Security Division in early 2002, and was incarcerated in the Deyang Prison on a sentence of eight years. He was released in 2010.

Mr. Liu’s wife, Ms. Liu Jianping, was arrested by officers from the Domestic Security Division in July 2014. Their home was ransacked. Ms. Liu was sentenced to eight years in prison, and is incarcerated in the Longquan Prison, Chengdu City.

Ms. Cui Bilian and her son were arrested by the Jialing District police around June 20, 2019.

Ms. Su Aiping, 48, from Jianli County was arrested at home by Zheng Jiyuan, deputy head of the Jianli County Domestic Security Division, and approximately twelve officers late at night on June 24, 2019. The officers kept Ms. Su’s mother in the living room and did not allow her to move. They dragged Ms. Su out of bed and handcuffed her. They confiscated Falun Dafa books, photos of the founder of Falun Gong, and her motorcycle.

Ms. Su was taken away. Her whereabouts are unknown.

“A Good Deed by the Deputy Head of a Police Station”

“Artists, Musicians, and Poets Persecuted for Their Belief in Falun Gong (Part 1)”