(Minghui.org) Mr. Yang Naijian, a Falun Gong practitioner, was released from prison on May 2, 2019. He was imprisoned for six years for telling others about the persecution of Falun Gong in China. His mother, Ms. Liu Xiuzhen, died earlier this year after three years of imprisonment. Mother and son were not allowed to see each other prior to her death.

Falun Gong, also known as Falun Dafa, is a mediation system that consists of exercises, and practitioners follow the principles of Truthfulness-Compassion-Forbearance. Since the Chinese Communist Party (CCP) began to suppress the group in July 1999, a large number of practitioners have been detained and tortured for their belief.

Over 70 police officers from Qingdao City entered Ms. Liu’s home on May 2, 2013. They arrested 16 practitioners including Ms. Liu, Mr. Yang, as well as relatives and friends. On June 4, CCTV and Xinhua News Agency claimed it a major victory by the Qingdao Police to stop practitioners from illustrating and publicizing torture methods. Arrest warrants were given to family members on June 9, charging them with undermining the law implementation. Later on, officials changed the charges to “inciting subversion of state power” and forced family members to sign the documents.

While detained at the Xifu Detention Center, Mr. Yang was beaten and tortured, and sentenced to a six-year prison term. His mother, Ms. Liu, was sentenced to three years. Other practitioners were also sentenced – Mr. Yuan Shaohua and Lu Xueqin were sentenced to four years and ten years prison terms respectively. While in the Shandong Women’s Prison for six months, Ms. Liu suffered physical and mental abuse. She was diagnosed with lung cancer. Officials continued to harass and threaten her, which led to her death in January 2019.

Mr. Yang was taken to the Shandong Province Prison on November 11, 2014. Three days later, inmate Yin Jun ordered Yang Hongyou and other inmates to torture him in the bathroom, because there was no security camera.

These inmates then tied him tightly to a chair, with both legs affixed to the front chair legs. To prevent him from calling out “Falun Dafa is good,” they taped his mouth shut. They then tilted the chair backward, leaving the front legs off the floor and the entire chair leaning against a wooden bench. 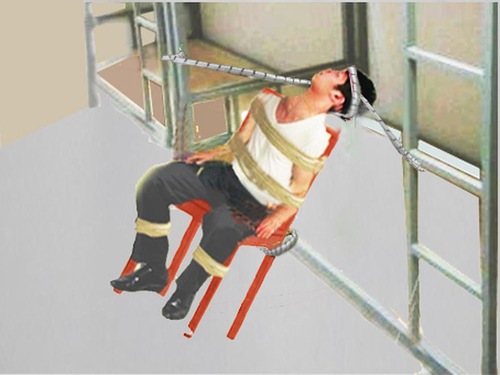 The inmates also wrapped a rope around his head and tied the rope to the heating pipes. In that way, Mr. Yang's body and head leaned backward, with little support for his body, neck, and head. He could not raise his head and his neck was bent uncomfortably. In addition, his mouth was sealed, making it difficult to breathe. It was very painful. As time continued, he began to have hallucinations. But in his mind, Mr. Yang was clear that he should not give up his belief.

Knowing Mr. Yang was found to have heart disease and blood pressure problems due to torture in the detention center, the inmates brought him medicine before tying him up. But he refused to take it. This way, he was tied up tightly from 8 a.m. until the afternoon. During the process, one inmate kept measuring his pulse and blood pressure.

Mr. Yang faced two choices. One was to yield and get untied; the other was to endure the unbearable pain. Again and again, he felt on the verge of death and the torment was beyond description. Nonetheless, he remained steadfast in his faith.

Mr. Yang was in a life-threatening condition because of the torture. He was close to death, and fluid came out of his mouth. Inmate Yang Hongyou informed guards about the situation. Mr. Tang was taken to the prison hospital for emergency treatment twice. One time his blood pressure was 180 and another time 170, with a pulse of 134 and 136 respectively. In addition, he suffered from myocardial ischemia as well as atrial and ventricular hypertrophy.

At that time, Mr. Yang’s entire body kept shaking and he could not stand. Liu Bo, a doctor in the prison hospital, prescribed medicines and one inmate force-fed them to Mr. Yang.

He remained in poor health. He had no strength and kept trembling. In addition, he had difficulty breathing, feeling chest pain. He was often in a trance and would vomit whenever he moved. To climb up to the 6th floor, he needed three breaks to get there. Noticing his condition, officials took him to the prison hospital again on November 27, 2014. Liu, the doctor in the hospital, refused to treat him. In the end, Mr. Yang was transferred to the Jinan Police Hospital.

In the detention center, guards handcuffed him and hung him up for three days and three nights to force him to confess something that could be used as evidence against him. To oppose the persecution, Mr. Yang went on hunger strike and officials gave up in the end.

The Suffering of Family Members

The six years Mr. Yang was imprisoned also caused a lot of agony for his family. Through the years, there were several instances when relatives of Mr. Yang died, and family members were unable to see their loved ones one last time because of the persecution:

“My Family Experiences the Power of Falun Dafa”