(Minghui.org) Sydney Opera House is one of the world's most famous tourist attractions and welcomes visitors from many countries. Falun Dafa practitioners often set up poster boards to introduce the meditation and spiritual discipline, as well as its persecution by the communist regime in China. A-wen is one of the Falun Dafa practitioners who regularly volunteer at the site. 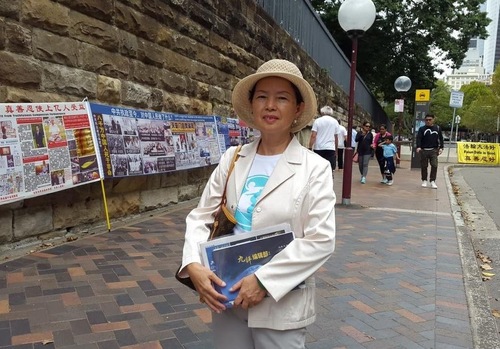 A-wen talks to Chinese tourists near the Sydney Opera House about the persecution of Falun Dafa in China.

A-wen was born into a Buddhist family. After Mao Zedong started the Cultural Revolution in 1966, A-wen graduated in 1968 and was sent to the countryside as an “educated youth.” She said she naively believed the political campaign would soon end but then wasted ten years of her youth in a remote, mountainous province.

Teenagers like her who were sent to the countryside between 1966 and 1968 by the Communist Party were called laosanjie, or “the old three.”

After she returned home in 1978, she taught herself medicine, became licensed, and opened a clinic. From the 70s to the 90s, she saw the deterioration of morality in society under the communist regime. Even doctors were not exempt, and many medical professionals began to treat patients based on the amount of bribes they received.

However, she also saw many Chinese practicing Falun Dafa and many of her patients regaining their health as a result. Her 73-year-old grandmother practiced Falun Dafa for only six months, and all her heart, brain and cardiovascular ailments were gone.

A-wen knew that Falun Dafa was good but she didn't practice herself. Because she had lived through the Cultural Revolution, when the Communist Party started persecuting Falun Dafa in 1999, she knew the Party line was another big lie.

A-wen moved to Australia in 2001. By 2003, she began to experience pain in her spinal disks. She remembered Falun Dafa and bought a copy of the main book, Zhuan Falun, in Sydney's Chinatown.

She recalled, “It was New Year's Eve. I opened the book after supper. I sat up all night and read the book. I finished it the next morning.”

“I was so excited. This is an extraordinary book. The teachings are profound and wise and touched my heart. Many of life's puzzles and the questions I had–which Buddhist scriptures could not answer–were answered clearly in Zhuan Falun.

“I was so happy that I knew I found what I'd been missing! My entire body felt light and relaxed, something I had never experienced before. The cervical spondylosis was gone even before I started practicing the exercises.”

A-wen also suffered from cardiovascular disease, arrhythmia, rheumatoid arthritis, and chronic bronchitis, so winter days were torturous for her. Just reading the book relieved her pain.

Since then, A-wen has continued to read Zhuan Falun every day.

A-wen follows Falun Dafa’s principles of “Truthfulness, Compassion, Forbearance” as a guide in her everyday life.

She stopped fighting for her portion of the family property in China. Her daughter-in-law's family is happy, and now A-wen feels at peace.

A-wen was shy and not accustomed to speaking in public. At first, she couldn't open her mouth or say anything. She stood and watched as busloads of Chinese tourists arrived and left.

However, her urgent sense of mission helped her let go of her notions and build the courage to speak to groups of strangers.

She started by talking to one person at a time and then one group at a time. Gradually, she was able to talk to an entire busload of tourists.

“If they listen, they usually agree to quit the Party. Sometimes there isn't enough time, but at least they understand the facts,” A-wen said.

An Entire Busload of Chinese Tourists Quits the CCP

One winter day in 2017, a large group of Chinese tourists had finished visiting the opera house and returned to the parking lot. Holding a large display board, A-wen walked up to them and said, “Folks, have you heard about the crimes a former CCP leader committed? Live organ harvesting from Falun Dafa practitioners! The whole world knows about this unprecedented evil. The whole world is calling for an end to the persecution. But the communist regime is still covering up the facts.”

“Falun Dafa has received more than 3,000 proclamations in many countries. The main book, Zhuan Falun, has been translated to more than 40 languages. Practicing and following the principles improves health and moral standards. Dafa teaches people Truthfulness-Compassion-Forbearance and to be a good and kind person.”

One tourist pointed to another man and said, “He is our leader. Get him to quit first.”

A-wen turned to the leader and said, “Please take the lead and quit.” The man agreed and said, “Yes, I quit! All of us quit the CCP.”

The bus was coming, so the tourists formed a line to board the bus, and everyone gave her their name.

One day in 2017, a Chinese couple stopped to read the display boards. A-wen approached them and told them about the self-immolation hoax staged by the communist regime in 2001 to incite hatred against Falun Dafa.

She said, “You must have been to Beijing and Tiananmen Square. Have you ever seen any policemen patrolling with fire extinguishers on their backs?”

A-wen pointed out, “The so-called immolation incident only lasted a few minutes. How could more than ten fire extinguishers be found and brought to the site in such a short time? If it were an unexpected event, how could a camera crew be nearby and film the entire event from beginning to end?”

“The former CCP leader feared being brought to justice, so he ordered an Internet firewall be built to block the news from overseas. In China, you have to penetrate the great firewall to read the truth. Today, you are here. You should cherish this opportunity and learn the truth.”

A-wen showed them information about the CCP’s state-sanctioned killing of practitioners for organs, and the couple said they didn't know. The husband condemned the cruelty of the crime. The couple agreed to quit the Party.

“Malongayangay, Taiwan: Raising Awareness of the Persecution of Falun Dafa at a Well-Known Tourist Destination”