(Minghui.org) Falun Gong practitioners in Duisburg, Germany held events from June 8 - 9, 2019 to expose the Chinese Communist Party's (CCP) persecution of the spiritual practice. They collected signatures on a petition calling for an end to the persecution. 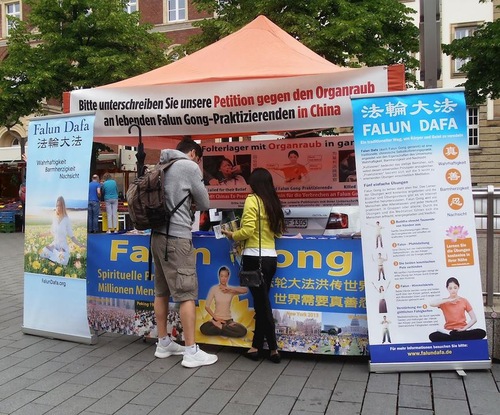 The activities on Saturday, June 8 were held near the Forum, the largest shopping center in Duisburg. As soon as practitioners set up their banners, several passersby stopped to ask for information and signed the petition.

One woman could not believe that such brutality was still happening in the world. A practitioner explained the background of the persecution and how practitioners are calling for it to end. She listened with tears in her eyes and signed the petition.

As soon as one man noticed the banners, he immediately walked over and signed the petition. He said that he'd heard about the persecution before. He wanted to make a donation to help Falun Gong. A practitioner thanked him for his compassion and told him that they didn't accept donations.

June 9 was a weekend market day at Inner Harbor, so the market was filled with crowds of people.

Falun Gong practitioners have been holding their group exercises near the market for over ten years. Their slow and smooth exercise movements attracted many people. Some stopped to watch. Others asked for more information. Several people signed the petition. Over the years, frequent market visitors have become the practitioners' friends and supporters. They greeted practitioners warmly and wished them good luck.

“Cooperating on a Dafa Project”

“Improving by Working Together to Rescue Arrested Practitioners”