(Minghui.org) Just prior to the beginning of this years’ exam season, Falun Gong practitioners were invited to return to Bloomfield Community School to give a presentation to the graduating seniors in the village of Malahide, in Dublin County. The practitioners have been invited to give presentations there many times over the years. 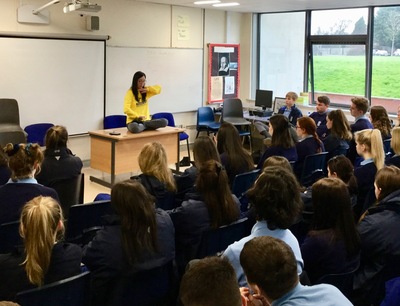 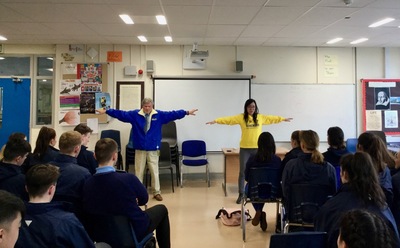 Practitioners talked about the origins of Falun Gong and about the core principles of the practice, Truthfulness Compassion Forbearance, and how a cultivator applies these in his or her daily life. They talked about the rapid spread of the practice in China, where 100 million people were practicing by the late 1990s after its initial public introduction in 1992. 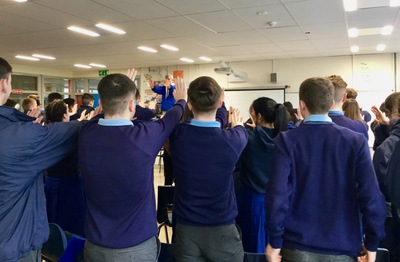 The practitioners demonstrated the five exercises for the students and helped them learn the movements. The exercises got them stretching, relaxing, and smiling.

The practitioners also shared with them about the persecution of Falun Gong, how, when, and why it started and continued. They talked about the brutality of the persecution, in particular the Chinese communist regime's crime of killing imprisoned practitioners for their organs for sale to transplant patients. The class discussed how the environment of communism and atheism led to the existence of such an atrocity of forced organ harvesting from innocent, healthy people.

The school is in the village of Malahide, in the County Council area known as Fingal County Council. The students and staff at the school have played a positive role in world history and against the persecution.

In 2017, Falun Gong practitioners presented information on the persecution to all Councillors in Fingal County Council. And in June of that year, a Motion condemning the persecution of Falun Gong was passed unanimously by the Council.

The Motion stated that the Council agreed to:

1. condemn the practice of state-sanctioned forced organ harvesting in the People’s Republic of China;

2. call upon on the Government of the People’s Republic of China and Communist Party of China to immediately end the practice of organ harvesting from all prisoners of conscience;

3. demand an immediate end to the 17-year persecution of the Falun Gong spiritual practice by the Government of the People’s Republic of China and the Communist Party of China, and the immediate release of all Falun Gong practitioners and other prisoners of conscience;

4. press upon the People’s Republic of China to allow a credible, transparent, and independent investigation into organ transplant abuses.”

“After I Genuinely Cultivated Myself My Husband Understood the Truth”

“Do Well the “Three Things” and Truly Cultivate”