Spreading the Message of Truthfulness-Compassion-Forbearance at Community Events

(Minghui.org) For more than two decades, Falun Gong practitioners around the world have invested tremendous effort into spreading the universal principles of Truthfulness-Compassion-Forbearance, which are the guiding teachings of their meditation practice.

Practitioners participate in all kinds of local community events to demonstrate the beauty of the practice and to introduce it to people who have predestined relationships with Falun Gong. This report covers four such events that were recently held in Latvia and the U.S.

Daugavpils, the second largest city in Latvia, celebrated its 744th birthday from June 7 through June 9, 2019. The celebrations attracted thousands of visitors from around the world. Falun Gong practitioners participated in the city's celebratory parade on Saturday, June 8, 2019. 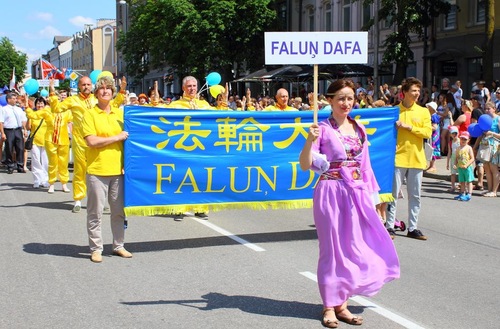 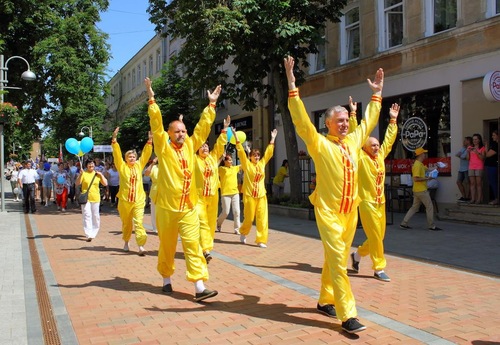 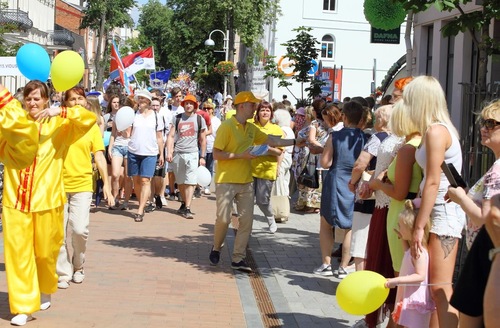 After the parade, practitioners held a free exercise workshop in Dubrovin Park to teach people the five Falun Gong exercises. 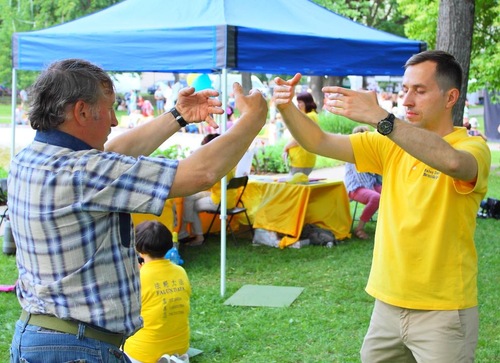 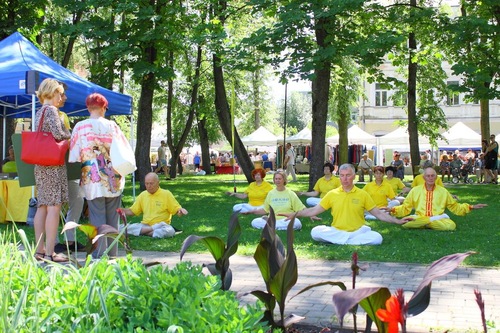 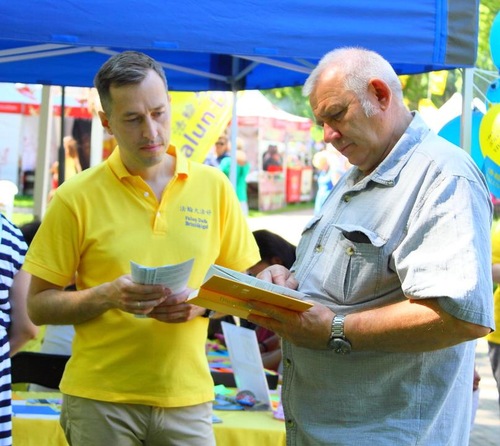 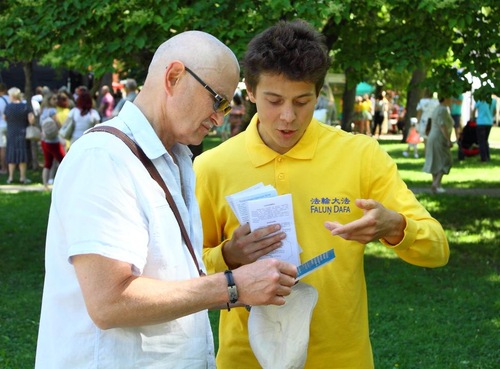 Visitors learn the exercises and ask for more information about Falun Gong. 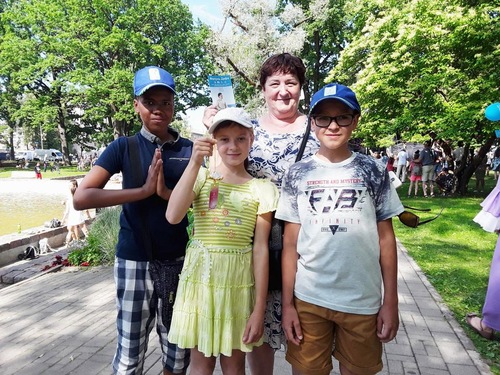 Practitioners also showed children how to fold paper lotus flowers, which are a symbol of purity in Chinese culture.

Falun Gong practitioners from Portland, Oregon, and nearby cities have participated annually in the Grand Floral Parade for many years. The parade is one of the most popular activities at the annual Portland Rose Festival.

Falun Gong's Tian Guo Marching Band dazzled the crowds this year with their eye-catching uniforms and powerful music. The band was among approximately 100 entries in the parade on Saturday, June 9, 2019. 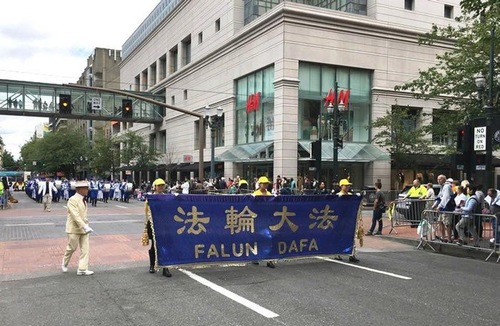 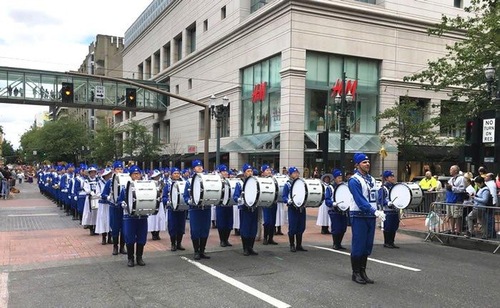 The Tian Guo Marching Band in the Grand Floral Parade in Portland, Oregon, on Saturday, June 8, 2019.

The 150-member Tian Guo Marching Band was the largest band in the parade. Dressed in traditional Chinese costumes, the band played many songs composed by practitioners. “The strong energy” was one of the most common comments from the audience about their performance.

Fox TV broadcast the parade live. The host introduced the Falun Gong entry as being a very unique band that was very different from the other musical groups.

Visitors at the Slow Living Expo on Brattleboro Common in Vermont learned the gentle and stress-reducing exercises of Falun Gong on Saturday, June 8, 2019. The expo celebrates farming, local produce, and green, sustainable living. 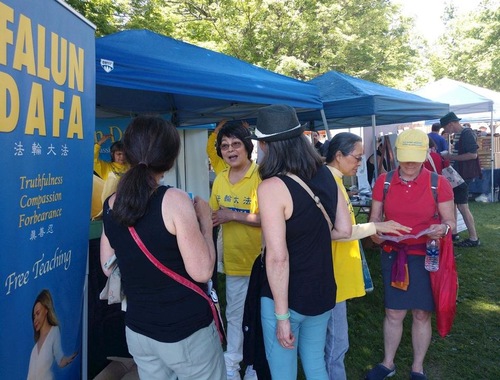 Practitioners introduce and teach the Falun Gong exercises at the Slow Living Expo in Vermont on Saturday, June 8, 2019.

Vermont resident Tanya Tab had tried some other meditation practices but said she could never reach tranquility. The practitioners' demonstration drew her attention. After she tried all five exercises, she said she felt relaxed and had a sense of inner peace. She decided to join a free Falun Gong workshop to continue learning the practice.

Practitioners in New York City attended a local summer fair in Murray Hill on the East Side of Manhattan on Sunday, June 9, 2019. Practitioners demonstrated the exercises, passed out flyers, and taught children how to fold paper lotus flowers. Many fairgoers asked for information about local exercise sites. 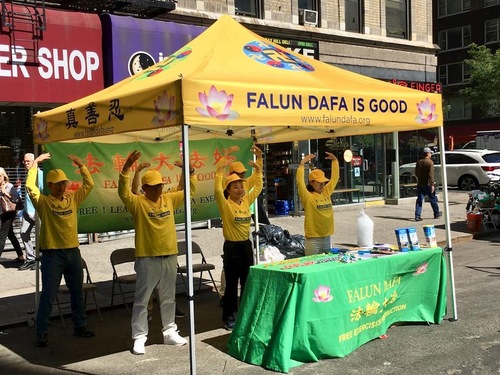 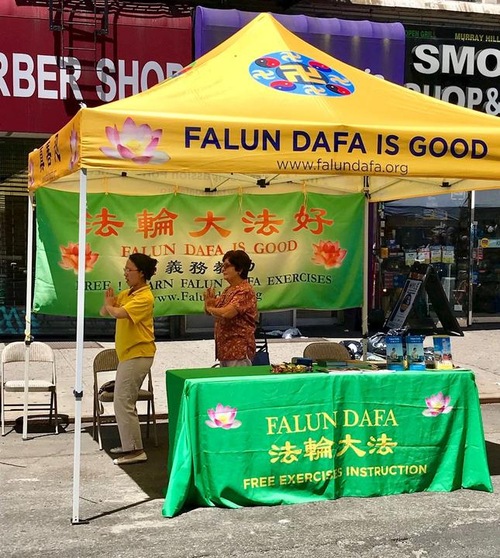 “Many people wanted to do the exercises today,” said a practitioner. “One woman I taught said she felt very comfortable. She told me she's had pain in her shoulders before we started, but it was completely gone after we finished doing the exercises. She told me that she would watch the instruction video at home and continue to practice.

“Some people had already gotten our flyers in other places, such as Flushing, and wanted to know the details. They were happy to see us here today,” he said.