(Minghui.org) Falun Dafa practitioners in Canada participated in the Teddy Bear Picnic Grande Parade in Coquitlam on June 9, 2019. Their fascinating performance while walking in the parade won high praise from spectators.

“Falun Dafa is great,” said Mr. Lu, a spectator. “Truthfulness-Compassion-Forbearance is great! This is traditional Chinese culture. I will post my photos of Falun Dafa today on my social media.” 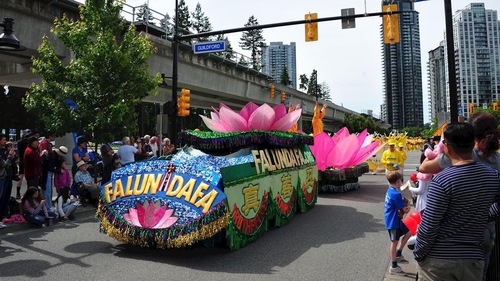 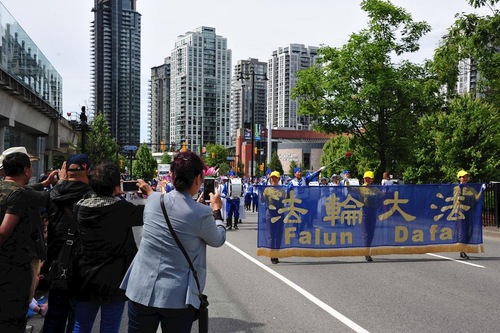 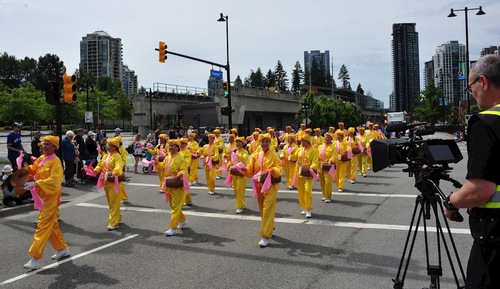 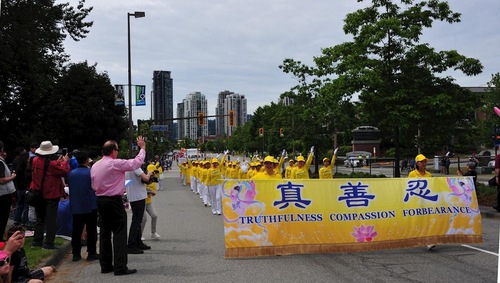 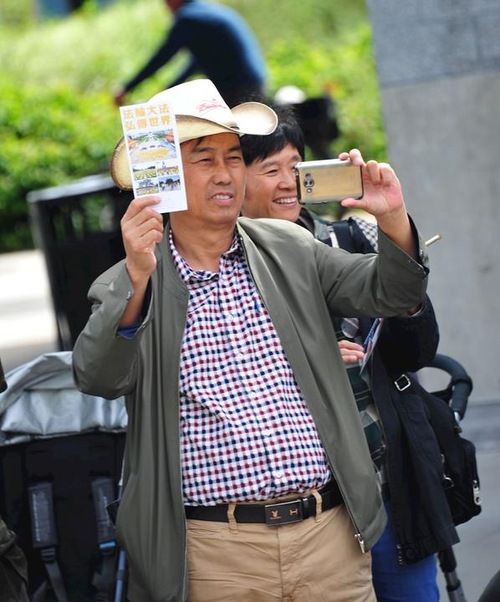 Enjoying the nice weather, crowds of spectators, including many Chinese, lined the street. Most were familiar with Falun Dafa from parades in previous years and were excited to see their beautiful performance again. Mr. Richard Stewart, mayor of Coquitlam, also took pictures of Falun Dafa as the group approached the central stage.

The Falun Dafa procession included the Tian Guo Marching Band, a waist-drum troupe, an exercise demonstration team, and a float that displayed the words “Truthfulness-Compassion-Forbearance.”

Mr. Lu and his wife were visiting their family in Vancouver and got a chance to see the parade. Mr. Lu stood up when he saw the Falun Dafa group. He waved and gave practitioners a thumbs-up. He knew that the Chinese Communist Party (CCP) had smeared Falun Dafa with its propaganda. He said, “I know Falun Dafa is great. Truthfulness-Compassion-Forbearance is traditional Chinese culture. Our traditional culture stresses these moral standards. I'm so happy to see Falun Dafa today!”

Mr. He, an immigrant from China, told the reporter, “The Teddy Bear Picnic Parade is a great community event. The city officials and local residents all gather together and enjoy it. Falun Dafa looks great in the parade. They have a large group and give a marvelous performance. Having such a large group representing the Chinese makes us proud!”

Daniela Harmon, a local resident, took pictures of the Falun Dafa participants and clapped to the beat of the Tian Guo Marching Band. She said she knew about Falun Dafa and that the exercises were beneficial to one's health. She said she enjoyed their participation in the parade a lot and could feel their peaceful energy. She stressed, “I support Falun Dafa and welcome Falun Dafa to our community. They have brought peace!”

The host of the parade, Mr. Tim MacDonald, introduced the practitioners as they passed the stage: “Falun Gong, which is also called Falun Dafa, is an ancient Chinese cultivation practice. It improves the mind and body by following the principles of Truthfulness-Compassion-Forbearance and doing the five exercises. Falun Dafa has been introduced in over 100 countries.”

“Spreading the Message of Truthfulness-Compassion-Forbearance at Community Events”