“Free China: The Courage to Believe” Screened in Italy

(Minghui.org) The documentary Free China: The Courage to Believe, was screened in the city of Thiene in Italy on May 24, 2019.

Directed by Michael Perlman, the film tells the stories of Jennifer Zeng and Charles Lee, two courageous people who were detained and tortured in Chinese labor camps for their belief in Falun Dafa, also known as Falun Gong (a traditional Chinese qigong self-improvement practice based the principles of Truthfulness-Compassion-Forbearance).

The screening event was sponsored by the Thiene city government and held in the conference room of Biblioteca Civica, a library. Additional rows of chairs had to be added to seat the audience, which extended outside the door. The door remained open during the film screening.

Around 100 people watched the film. Many of them expressed shocked after learning about the brutal methods used to persecute Falun Gong practitioners in China, including the killing of practitioners for their organs for sale to transplant patients. 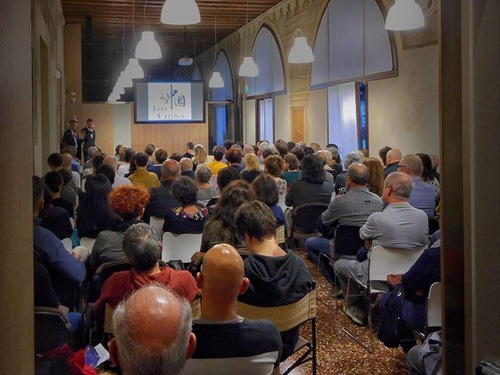 Audience members were asked to share their thoughts following the screening. One lady said, “I would like to do something. But facing all of this, I feel powerless.” The host replied that Falun Gong practitioners hold peaceful protests, including sit ins in front of Chinese embassy and invited the lady to join.

Another lady said she received a flyer about the screening in the mail, and she and her husband had come to watch the film to learn about the persecution.

The audience responded warmly to the film. Around 50 people signed a petition calling for an end to the Chinese Communist Party's (CCP) state-sanctioned live organ harvesting. Many people said they hoped that the Italian Government would take action against the human rights violations in China and call for an international investigation of the persecution.

Falun Gong was first brought to the public in 1992. By the late 90s, 100 million people across China were practicing Falun Gong. The practice spread through word of mouth and from heart to heart, as people told others how the practice had improved their health and character. Jiang Zemin, former head of the Chinese Communist Party (CCP), perceived the spiritual discipline's growing popularity as a threat to the CCP's atheistic ideology and issued an order to ban Falun Gong on July 20, 1999.Under Jiang's personal direction, the CCP established the 610 Office, an extralegal security organization with the power to override the police and judicial systems. The sole function of the 610 Office is to carry out the persecution of Falun Gong.Minghui.org has confirmed the deaths of thousands of Falun Gong practitioners in the persecution over the past 20 years, although the actual number of practitioners killed is estimated to be much higher. Hundreds of thousands of practitioners have been imprisoned and tortured for their faith, and an overwhelming body of evidence shows that the CCP has been harvesting organs from detained prisoners of conscience, who are killed in the process, to supply its organ transplantation industry. The majority of these prisoners are Falun Gong practitioners.

“When I Study the Fa, I am Guided By the Fa”