(Minghui.org) World Falun Dafa Day celebrations in Australia last month received much support in letters, proclamations or speeches at events commending Falun Dafa practitioners for raising awareness about the persecution while offering the benefits of the practice in their communities.

The following are some remarks of several community leaders who supported recent celebrations as well as Falun Dafa practitioners' efforts over the years. 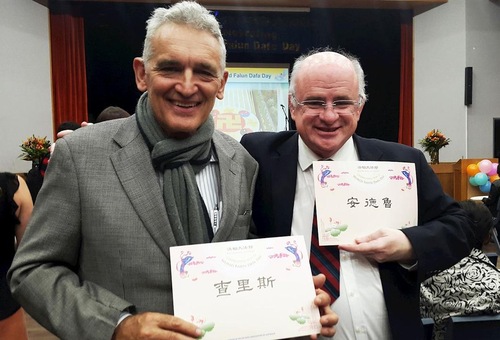 Mayor Andrew Wilson (right) of the City of Parramatta, Sydney and Parramatta candidate Charles Camenzuli (left) of the Liberal Party of Australia for Federal Parliament, at the World Falun Dafa Day reception in Ashfield City Hall on May 12, 2019

“We are very proud of your contribution,” said Mayor Wilson, “as well as the effort you made to enhance the beauty and prosperity of this city.”

He recalled when he first heard about Falun Dafa – it was a winter when he met Falun Dafa practitioners. He saw them sitting on cold bricks downtown, and doing the Falun Dafa sitting meditation.

He thought to himself that these people were very committed, and were doing what he had never done. A Dafa practitioner asked him to give a speech at the time. For that he did some online searching. He found that all Falun Dafa practitioners wanted was only basic freedom. He said, “How can I not help those who are asking for no more than basic human rights and freedom of belief?”

He continued, “I have supported Falun Dafa for about ten years. I have seen that they are very good people. They don't need much. They are just asking for freedom of belief, which everyone should have.”

He said he once participated in a Falun Dafa rally. At the rally, when a spokesperson described the CCP’s torture against Falun Dafa practitioners, he heard some people in the audience crying. It was very touching, he said.

He wondered what he more he could do to support Falun Dafa against the persecution. He said he was grateful to Falun Dafa for bringing infinite positive energy to the city.

Mr. Camenzuli said he learned that Falun Dafa had spread in China from 1992 to 1999, attracting one hundred million people. He believes that the fast spread of Dafa was definitely because it is positive and effective.

He remembered that the Chinese government praised Dafa when it was made public. He said, “Then, the CCP feared that too many people followed Truthfulness-Compassion-Forbearance instead of the CCP. This is inconceivable. The CCP is really evil!” 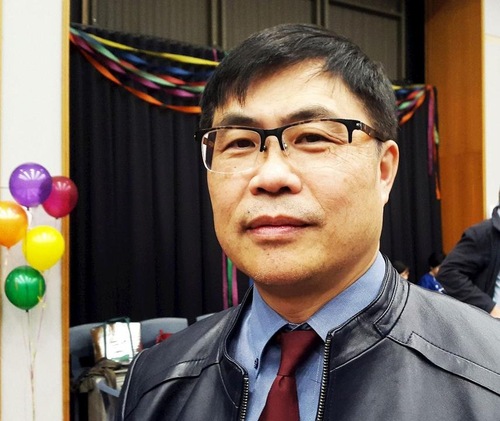 Zhong Jinjiang, chair of the China Democratic Solidarity Union, said, “I have known about Falun Dafa since the April 25, 1999 Peaceful Appeal in Beijing. I looked at it from a political perspective at first. Then, I began to slowly understand what Falun Dafa was about -- this was 20 years ago.”

“I was very touched every time I participated in Falun Dafa activities. I was also inspired and encouraged by Falun Dafa’s perseverance and unyielding spirit. I have learned a lot of things that will make us more steadfast in our beliefs.”

Zhong continued, “I often wonder: What kind of courage do Falun Dafa practitioners have? What motivates them, so that they can hold on to their belief for so many years? How can a so-called 'weak' group have such a strong will, and continue to protest the tyrannical persecution? This is because of the teachings and magnanimity of Falun Dafa's founder, and so many dedicated Falun Dafa practitioners doing this unselfishly.”

“But for the CCP, it is near its end: even many other groups targeted for persecution have joined the efforts against the CCP's totalitarian control. We believe that the Party is near its end. We must keep doing what we're doing.” 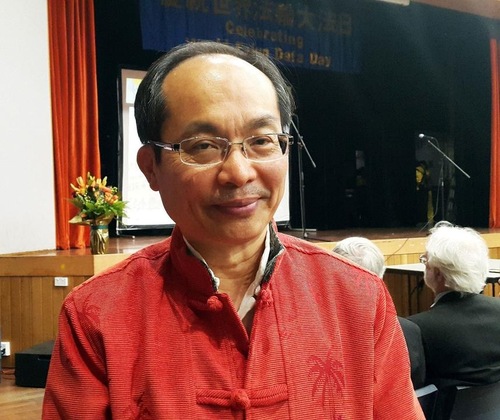 Dr. Feng Chongyi, a Chinese research scholar at UTS, said, “I admire Falun Dafa practitioners, as they have withstood the CCP's brutal persecution.”

“I think that the Falun Dafa group, given its spirit of great kindness and tolerance, has made it through the most difficult time.”

“People can judge right and wrong, or good and evil. A state power is very unreasonable to persecute a spiritual group of so many kind people. This has made people disgusted with the communist regime, and thus have become very sympathetic towards Dafa practitioners.”

“Many people in society do not dare to stand up and support (Falun Dafa) because of fear or other reasons. But there are many people who support Dafa in their hearts for so many years.”

“Among my friends, especially those in Australia, they are against the CCP’s suppression of freedom of belief and freedom of association. From the judgment of right and wrong, justice is on the side of Dafa! I am happy for Dafa practitioners!”

“Fellow Practitioners, We Should Not Be Attached to “This Year””

“Introducing Falun Dafa During the Eurovision Contest in Israel”