(Minghui.org) Falun Gong, also known as Falun Dafa, was made public first in Changchun, Jilin Province, China on May 13, 1992 by its founder Mr. Li Hongzhi. The practice spread to over 100 countries.

May 13 was declared “World Falun Dafa Day” in 2000. On the occasion of the 20th Falun Dafa Day, Falun Gong practitioners in Germany spread the practice to nine cities beside the Lippe River, over a period of six weeks.

The practitioners in North Rhine-Westphalia State traveled to the nine cities during weekends from the end of March to mid-May. They offered free instruction of the Falun Gong exercises and raised awareness of the Chinese Communist Party's (CCP) persecution.

The Lippe River is located in the North Rhine-Westphalia State, and is one of the three big rivers in that state. The Lippe River starts from around Paderborn, and the clear springs of the 200 springs of Paderborn are merged into the 200-kilometer-long Lippe. 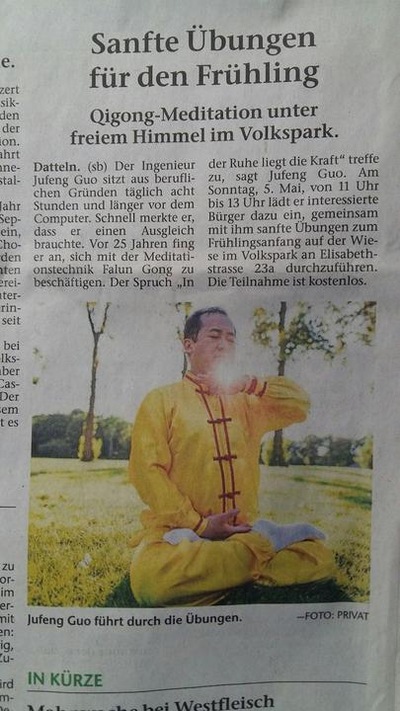 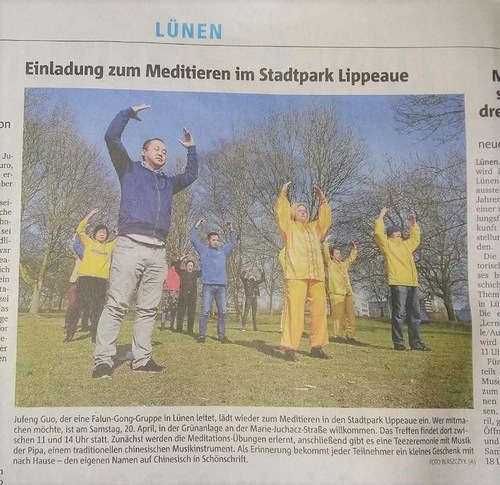 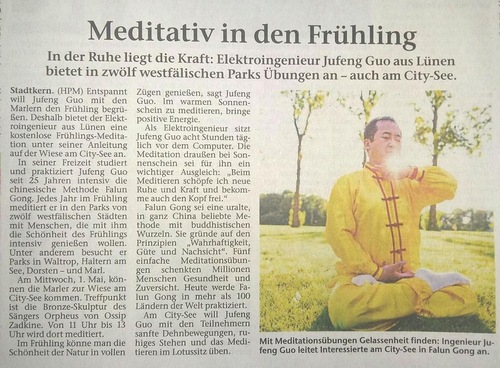 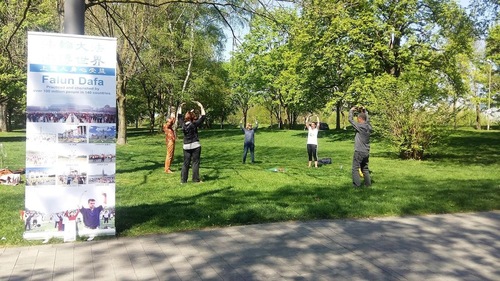 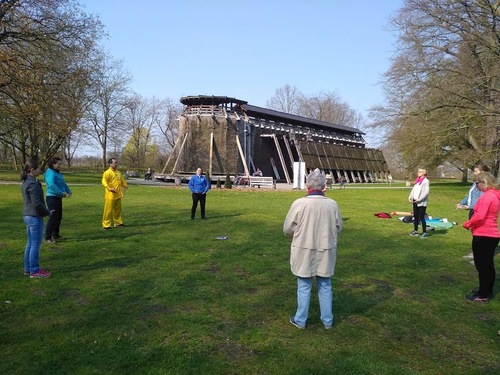 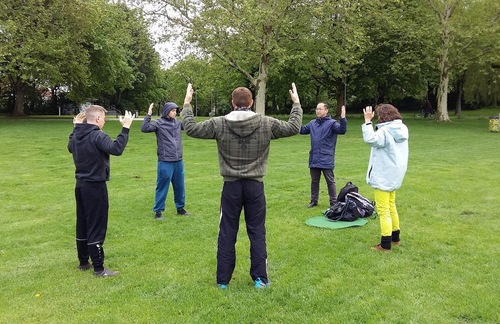 Next to the Paderborn City River 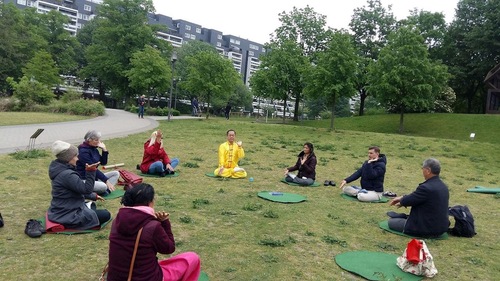 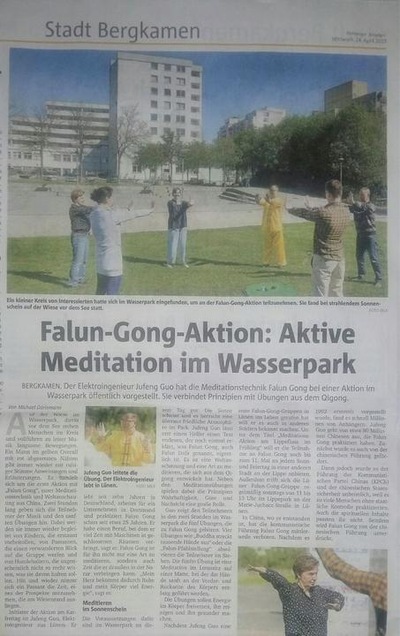 The newspaper Hellweger Anzeiger, which was established in 1845, 174 years ago, published an article, titled “Falun Gong Event – Peaceful Meditation at the Water Park.”

The reporter said that people stood in a circle in the meadow at the lakeside of the water park, and exercised to the calming music for two hours. This activity is Falun Gong, meditation from China. Children were playing by the side, and some passersby picked up the Falun Gong fliers.

The article also introduced the organizer of this activity – Guo Jufeng from Lunen City. He had come to Germany 10 years ago and is an engineer. He has practiced Falun Gong for more than 20 years.

He said, “Falun Gong is a cultivation system that teaches meditation. I teaches people to connect with and enjoy nature. My heart is quiet and my body is full of energy.”

That day the practitioners enjoyed beautiful sunshine, and the environment was peaceful. Guo first asked the participants to read a paragraph that talked about the principle of each set of Falun Gong exercises. He then introduced Falun Gong, and explained that practitioners follow the principles of Truthfulness-Compassion-Forbearance.

Within two hours, Falun Gong practitioners showed the participants the five-sets of Falun Gong exercises. The fifth exercise set is a sitting meditation with double-crossed legs. Falun Gong fills the body with energy, purifies the body and made the body healthier.

Before Falun Gong was banned in China, 80-100 million Chinese people practiced this cultivation system in the 1990s.

A reporter of the Westphalia Daily experiences practicing Falun Gong.

Westphalia Daily was established in 1850, and is 169 year old. The reporter, Ms. Kim Bussmann, also did the Falun Gong exercises. When finishing the exercises, she felt that her body was filled with energy. She wrote an article titled “Westphalia Daily Reporter Experiences Falun Gong.”

In the report, Bussmann wrote that the pressure of daily life has caused many people distress and problems of mind and body. The Chinese meditation practice Falun Gong relaxes the mind and body and brings back inner peace. Whether it is true or not Ms. Bussmann, a reporter from the Westphalia Daily, personally experienced it.

“The sun warmed my skin,” she said, “and I closed my eyes. Next to the music one could hear a bird’s crisp tweet and the sound of the water. I had a feeling as if I were in China. When we practiced the exercises Mr. Guo kept telling us when we had to change the hand gestures.”

Then, Mr. Guo said, “Lift your arms up as high as the ear for three minutes. I giggled and said that I could not keep my arms in that position for three minutes. Mr. Guo corrected the hand gestures for each of the participants until he was satisfied and returned to his position to turn on the music.

“The second set of the exercises starts from placing your hands in front of the abdomen. This posture is called conjoining hands. Mr. Guo encouraged us by saying, 'You will feel tired after a while. But after you end the practice, you will not feel tired'.”

She continued. “I didn't feel anything during the first two stances. The third stance was an action above my head. Slowly, my fingertips and shoulders were a little numb. I was younger than the others. By the time of the fourth movement, the arms should be kept at the same height as the head. When we finished the practice, what surprised me was that I had previously guessed that my arms would be painful with muscle soreness, but I felt very relaxed.”

“At this point, I thought this was my favorite practice, because it is just a few simple movements of the arms. The third set of exercises gave another feeling, which is not quite like the other sets. This is a bit different as this action requires a little coordination. I could not keep up. Mr. Guo told me a trick, 'There is a saying that yin and yang, where yang is a male, and yin is a female, when sitting across each other are the mirror of each other.' The young man opposite me really helped me a lot. My movements began to slowly become normal.

“The sun moved slowly, and I suddenly felt that it had been a long time. The fourth set of the exercises is that the two arms should move around the back. This set of exercises is called the Falun Heavenly Circulation. It went from the toes, along the legs, and then behind the body – just when I felt good, Mr. Guo said that the practice was over. The fifth set of exercises was to meditate. In the process of practicing, I was really relaxed. However, the sound of a horn affected me.”

“I could feel that pedestrians were always stopping to see us, but this was not important at that moment. 'Thinking like this is right',” Mr. Guo finally said. Other practitioners also expressed a positive experience. In the water park, I felt energy around us.”

In the nine cities, there were young and the elderly among the participants. Within the two hours of practicing in a park, they all experienced an inner peace.

“Spreading the Truth about Falun Dafa at a Detention Center”