(Minghui.org) Following an annual experience-sharing conference at the Barclays Center in Brooklyn, New York, on May 17, Falun Gong practitioners held numerous activities in New York City the next day to introduce the self-improvement system to the public. 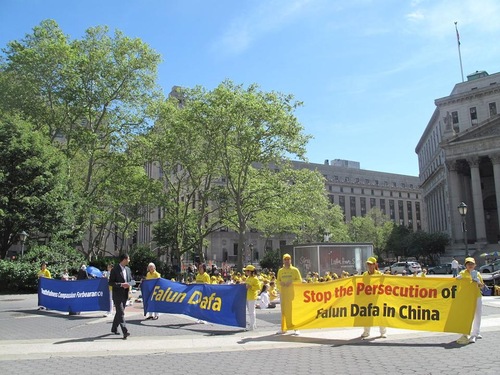 Insurance Agent: This Is What I Need

Javier Vega, an insurance agent, works in Manhattan and lives across the river in Jersey City. He passed by Foley Square on his way home and saw a group of Falun Gong practitioners meditating. They immediately drew his attention. 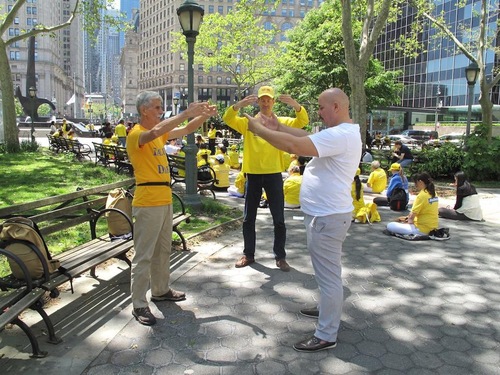 Javier Vega, an insurance agent, learned the exercises from practitioners.

A practitioner told Mr. Vega about Falun Gong, and Mr. Vega then began to learn the exercises from Christian, a practitioner who traveled from Sweden for the conference and other events in New York. Mr. Vega later talked with Marcos and his wife Tatiana, a couple from Puerto Rico. Marcos showed Mr. Vega how to access the teachings of Falun Gong for free from FalunDafa.org, and Mr. Vega said that he would like to read Zhuan Falun when he got home.

Mr. Vega learned the second exercise, and Christian shared with him how his life had improved through practicing the Falun Gong meditation. In particular, following the principles of Truthfulness-Compassion-Forbearance had enabled him to handle his daily routine and conflicts with a peaceful mind.

Impressed by the exercises and the heartfelt discussion, Mr. Vega said he felt good, as if his mind had been opened up. After learning about the locations and times of nearby group practice sites, he said that he would like to join in and also meditate in his backyard. “This is what I need,” he told the practitioners.

After they stopped for a break, Marcos recalled how he began to practice 10 years ago. “I saw a practitioner doing this in a park and felt a voice telling me to check it out,” he said. After he went home that day, Marcos looked up Falun Gong on the Internet and learned the exercises. He then told other people about the practice, including his wife.

Marcos said that when he first started practicing, he read the Falun Gong books and did the exercises every day. “In fact, I watched the exercise videotape every day as well to make sure my movements were accurate,” he said, “This brought me relaxation without any worries.” In addition, he had a better understanding of life and how to become a better person. By focusing on improving himself instead of focusing on others, he found inner peace and lived a simpler life.

“There was frustration and anxiety in my mind, and I used to think they were part of me. Instead, they are distractions for my true self and I have to work on getting rid of them,” he explained.

Tatiana is a kindergarten teacher from Bolivia. She heard about Falun Gong from Marcos and began to practice it afterward. The physical and spiritual benefits motivated her to tell more people about it. Besides a monthly information session, she and Marcos also teach the exercises for free three times a week in two cities. “When I told people that practitioners were brutally persecuted in China for doing this meditation and even became victims of forced organ harvesting, many people were in tears,” she said.

Christian came across Falun Gong in October 2000 when he was a college student at Lund University in Sweden. One day while walking on campus, Christian saw a man doing the exercises with some fliers next to him. “I picked up one and read it, and the words 'Truthfulness, Compassion, Forbearance' caught my attention,” he recalled. He approached the practitioner and said that he would like to learn the practice.

“In a few minutes, I could feel energy flowing in my hands. Later on, I also felt warmth in my lower abdomen,” he added. Following advice from the practitioner, he obtained a copy of Falun Gong from the library and began to read it.

In 2001, he watched the 9-day lectures on video given by Mr. Li Hongzhi, the founder of Falun Gong. “The minute I saw Master Li on the television screen and heard his voice, I was deeply moved and knew this is the truth. Master looks so holy and pure,” he continued.

Reviewing his past nearly 20 years of practice, Christian said Falun Gong had changed him a lot. “My major in college was environmental engineering. The teachings of Falun Gong made understand much more why we should protect and save mankind,” he said. “So many years have passed, and this message of hope is always with me in my heart.”