(Minghui.org) Falun Gong, also known as Falun Dafa, was first made public in Changchun, Jilin Province, China on May 13, 1992 by its founder Mr. Li Hongzhi. The practice has spread to over 100 countries since then.

Mayor Jim Watson, Mayor of Ottawa, Canada proclaimed May 13, 2019 as Falun Dafa Day in the city. The mayors of Ottawa have issued proclamations since 2001. 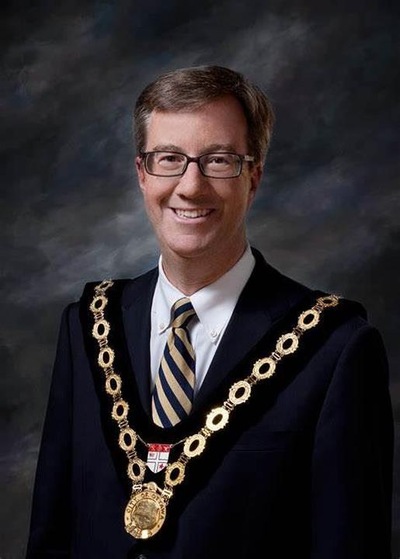 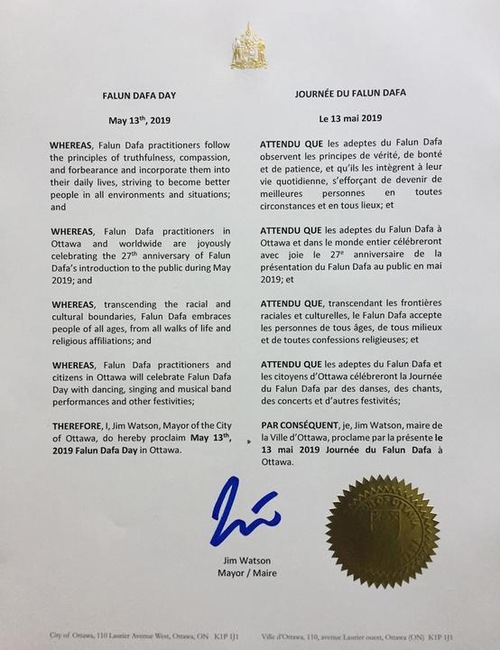 The proclamation states, “Whereas, transcending the racial and cultural boundaries, Falun Dafa embraces people of all ages, from all walks of life and religious affiliations; and

“Whereas, Falun Dafa practitioners and citizens in Ottawa will celebrate Falun Dafa Day with dancing, singing and musical band performances and other festivities.

“Therefore, I, JimWatson, Mayor of the City of Ottawa, do hereby proclaim May 13th, 2019 Falun Dafa Day in Ottawa.”

Mayor Dilkens stated in the letter, “Master Li Hongzhi, the founder of Falun Dafa, has helped tens of millions of people around the world to improve their health and moral standards, while deepening their understanding of life, humanity and the universe through the practice. Since its introduction to the public in May 1992 in China, Falun Dafa has also benefited many Canadians.

“Over the years, those engaged in this spiritual practice have had to fight for their freedom to believe, and to express their beliefs through this discipline. Today, people of all ages and backgrounds in over 114 countries worldwide practice Falun Dafa. It differs from other similar practices in its absence of fees or formal membership, lack of daily rituals of worship, its greater emphasis on morality, and the theological nature of its teachings.” 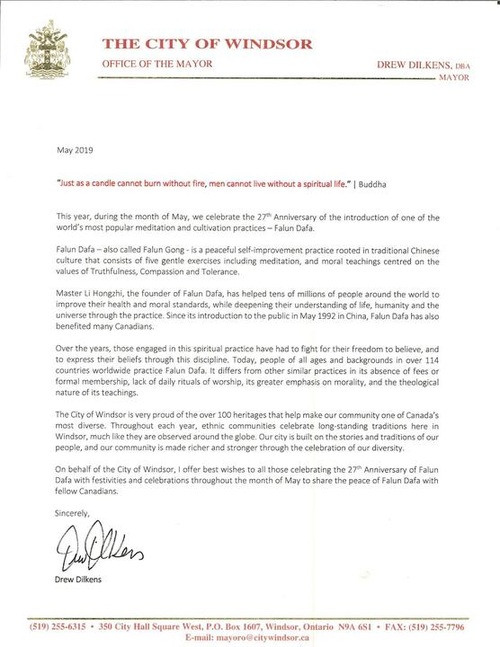 Letter from Mayor Drew Dilkens in recognition of Falun Dafa 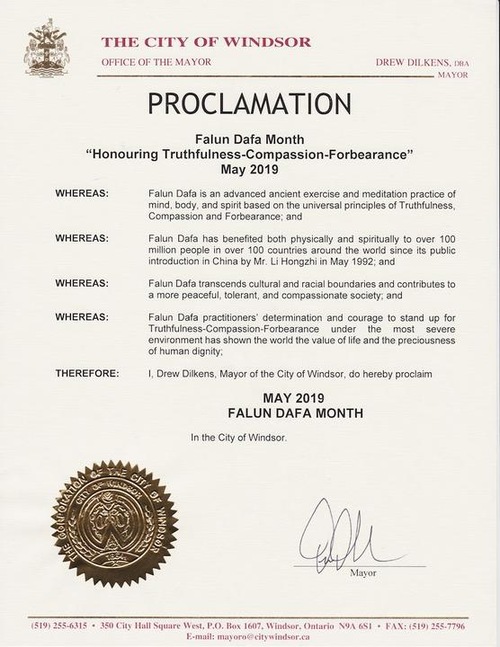 The proclamation states, “Falun Dafa practitioners' determination and courage to stand up for Truthfulness-Compassion-Forbearance under the most severe environment has shown the world the value of life and the preciousness of human dignity.”

The joint resolution was initiated by Assemblyman Anthony M. Bucco and co-signed by 67 senators and assemblymen. It was jointly issued by Stephen Sweeney, President of the Senate, and Craig Coughlin, Speaker of the General Assembly. 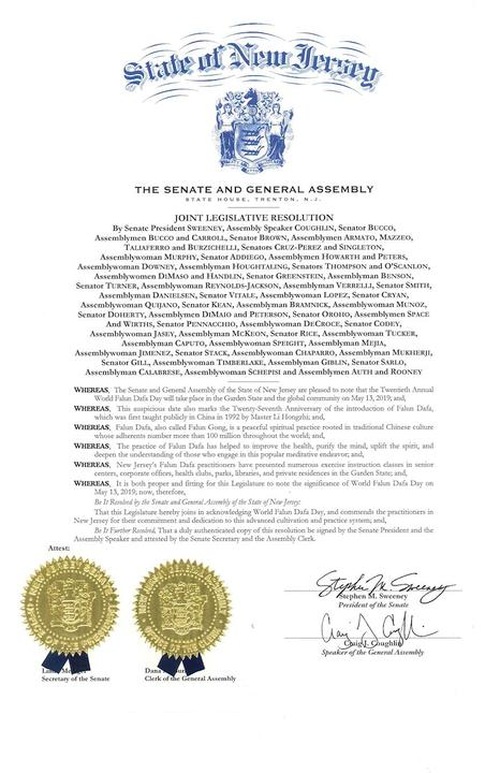 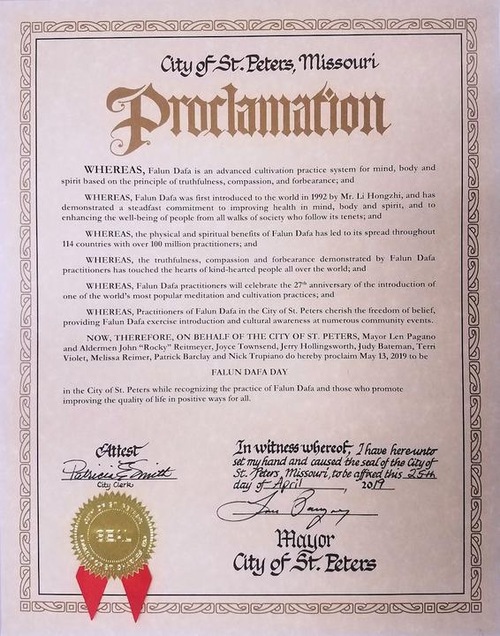 The proclamation states, “Practitioners of Falun Dafa in the City of St. Peters cherish the freedom of belief, providing Falun Dafa exercise introduction and cultural awareness at numerous community events.” 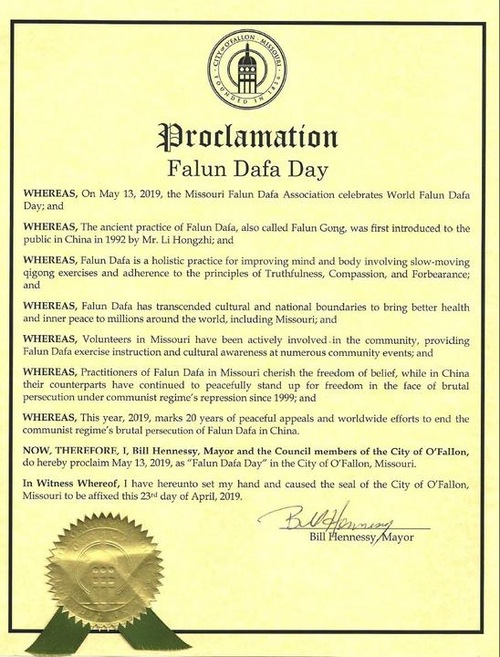 Mayor Bill Hennessy of the City of O'Fallon proclaims May 13, 2019 as Falun Dafa Day in the city. 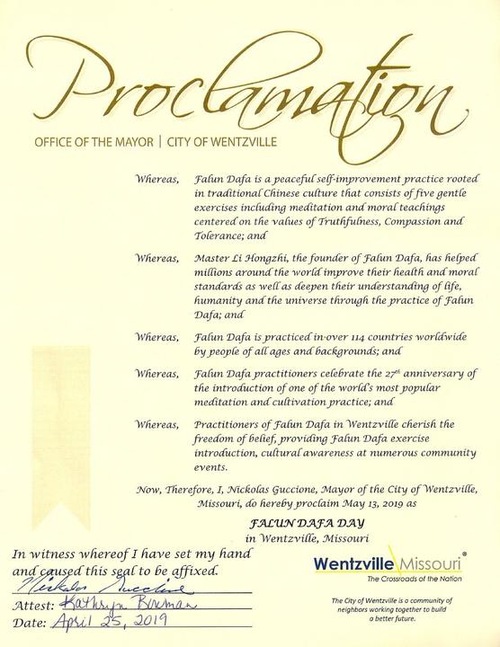 Mayor Nickolas Guccione of the City of Wentzville proclaims May 13, 2019 as Falun Dafa Day in the city.