The National Sun Yat-Sen Memorial Hall in Taipei, Taiwan is a must-see attraction for tourists from mainland China. It was built in 1972 as a memorial to commemorate the Republic of China's founding father Sun Yat-Sen.

In 2008, Falun Gong practitioners set up an information site near the memorial to reach out to Chinese tourists and inform them of the truth about the Chinese Communist Party's (CCP) persecution of Falun Gong. This is information that they cannot easily access in China, where news is tightly censored. 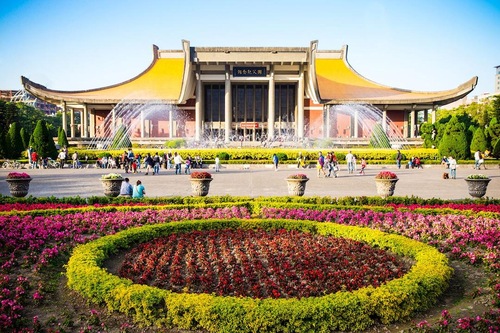 Practitioners in the Taipei area take turns participating in this effort, either after work, on weekends or holidays, or after finishing household chores. They demonstrate the exercises, distribute information, clarify the truth, and advise mainland Chinese tourists to renounce their memberships in the CCP and its affiliated organizations. 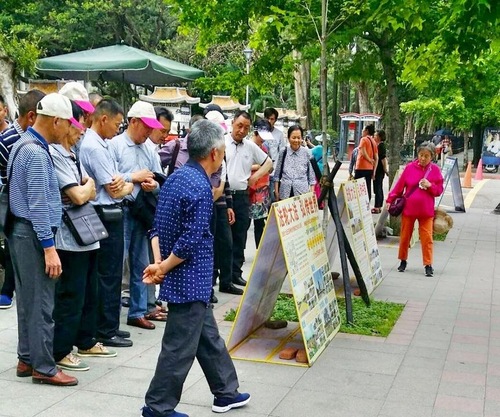 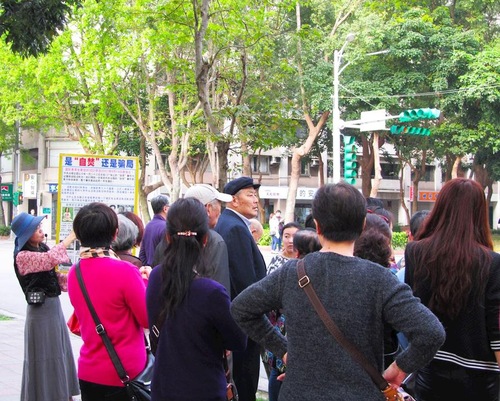 Withdrawing from the CCP after Understanding the Facts

A few days ago, a woman in her 70s got lost and asked Mr. Chen Hou-chuan, one of the practitioners, for directions. She appeared to be a little anxious initially, but she became comfortable after Mr. Chen gave her detailed directions.

Mr. Chen spoke with her about the wrongs the CCP is responsible for. She said she knew full well that the Party was bad and that it has caused morality in China to plummet. When Mr. Chen told her why it was important to quit the Party for a safe future, she agreed to quit using an alias. 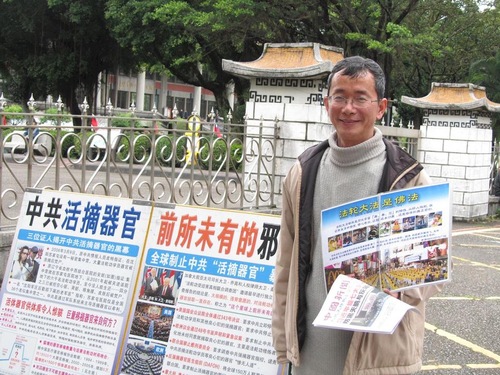 Mr. Chen started practicing Falun Gong in 2001. Before he took up the practice, he had often felt unwell but could not find the cause of his discomfort. He had tried other qigong schools in search of a cure, but all in vain. After practicing Falun Gong for a few weeks, all his ailments were gone.

A Young Man Gets the Message

Ms. Chang Ge-li started practicing Falun Gong in 2006 at the recommendation of her sister-in-law. Ms. Chang has a full time job, so, for the past three or four years, she has participated in the activities at Memorial Hall on her days off. 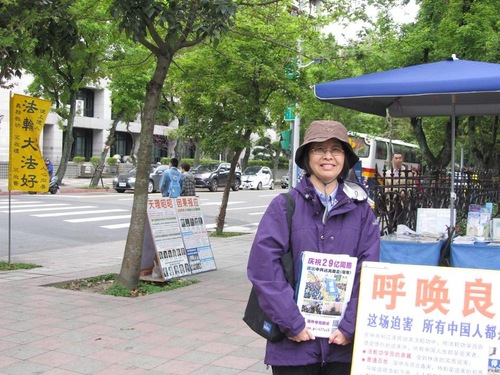 During the Chinese New Year this year, a tour guide led a group of more than 30 mainland Chinese tourists straight to the poster boards and encouraged them to read the truth. A man in his 20s, who said he knew a lot about Falun Gong, told Ms. Chang, “Nowadays we can see a lot of information by getting around the internet firewall. We know all this (information about Falun Gong). However, China is changing. I believe China will definitely become better.”

Ms. Chang reminded him, “There are countless problems in China, such as tainted milk powder, lack of food safety, poisonous vaccines, child abuse in kindergartens, and so on. But the victims who complain about these problems are arrested on false charges, while the perpetrators are still at large.

“Also, the lawyers who defend basic human rights for the minorities either go missing or get arrested. If China truly wants to be better, why is this happening? Have you thought about this?”

The young man thought for a few seconds and then said, “Well. That is definitely how it looks.” The young man got the message and agreed to renounce his memberships in the Communist Youth League and Young Pioneers, affiliates of the CCP. He gratefully shook hands with Ms. Chang and said, “Thank you!”

Breaking Through the Propaganda-Instilled Mindset

Ms. Cheng Hsi, originally from mainland China, has been married to a Taiwanese man for more than 20 years. She has practiced Falun Gong in Taiwan for more than a decade. She goes to Sun Yat-Sen Memorial Hall every week. She often uses a small microphone to remind the mainland Chinese tourists to break out of the CCP-instilled mindset and to think independently. 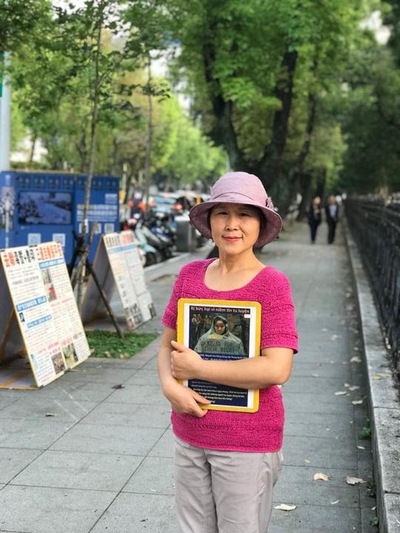 Ms. Cheng told mainland Chinese tourists, “The truth is not afraid of light, but lies are afraid to be exposed. Falun Gong has been spreading for 27 years and has been embraced in more than 100 countries around the world.

“More than 100 million people have practiced Falun Gong and benefited physically and mentally as a result. Only the CCP is persecuting Falun Gong. The CCP is trying hard to conceal the truth. Do you know why? Because it is afraid that you will find out the truth. Now that you are outside of China, you must seize the opportunity to see more and listen more. You can think and judge for yourselves. The more transparent the information, the more you can protect yourself.”

Pointing Out the CCP's Crimes

Huiyi has been clarifying the truth at Memorial Hall for seven years. Recently, she started a conversation with a woman from China by commenting, “When people raise their fists to swear an oath to join the CCP or one of its affiliated organizations, they become a part of the Party.

“Deities are watching. Good people are safe. We all hope that innocent people will not be held responsible for the CCP's crimes. Now you are here in Taiwan and can see factual information that you can't see in China. You should cherish this great opportunity and withdraw from the Party for a safe future.”

The woman said nothing, but the woman sitting next to her blurted out, “I want to quit the Party!” The first woman seemed to wake up and asked Huiyi to give her more information. The two women then quit the Communist Party's Young Pioneers and thanked Huiyi.

A tour guide had taken a mainland Chinese delegation traveling from the south of Taiwan to the north. Memorial Hall was their last stop. As members of his group entered the museum, he took a break and sat under the shade of a tree.

When Huiyi greeted him, the tour guide said that he already knew about Falun Gong. But when Huiyi told him about the CCP's state-sanctioned live organ harvesting from living Falun Gong practitioners, the tour guide was shocked and asked, “Really!?”

Huiyi then explained that, after the organ harvesting at Sujiatun Forced Labor Camp in Shenyang was revealed in 2006, Canadian legal experts David Kilgour and David Matas completed a three-year independent investigation confirming that those horrible crimes were taking place all over China.

Huiyi said that Falun Gong practitioners raise awareness at tourist destinations in the hope that people will not, in ignorance, aid and abet the CCP in committing atrocities. Practitioners also hope that people can spread the truth to those they know and that everyone can stand up for justice.

The tour guide said, “Thank you for telling me this today. This is very important. I'll encourage my tour group to take your information.”

“Treat People With Compassion at All Times”