(Minghui.org) The Art of Zhen Shan Ren (Truthfulness, Compassion, Forbearance) International Exhibition was held in the government office district of Kiev, the capital of Ukraine, for 14 days from late March to early April 2019. The exhibition attracted people from all walks of life, including politicians, artists, and media reporters. 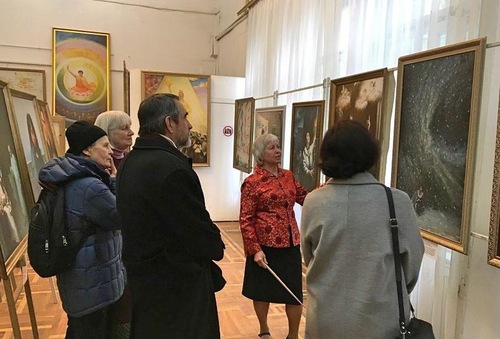 Patrons to the exhibition were amazed at the warm and peaceful energy the artworks emanated. Some of them said that they would like to learn Falun Dafa, and many condemned the Chinese Chinese Party's (CCP) persecution of the practice.

Nikolai, a Ukrainian artist, expressed his appreciation to the exhibition organizers for presenting the show. He said that the spiritual peace and beauty conveyed in the artworks impressed him, and that the exhibition as a whole inspired a fresh look at the relationship between life and the universe.

He noted the focus on “good versus evil” and “light versus dark.” It gave him a feeling of breaking away from isolation and moving to an eternal space.

“The eternal space has multiple layers,” he said. “It's the universe. The fire in the universe brings warmth. This exhibition helps us visualize this.

Another artist, also called Nikolai, said that the persecution scenes in the artworks reminded him of the repressive Ukrainian Communist Party “movements” from the 1930s to the 1950s.

He mentioned the piece with a young woman handcuffed in a cage with bricks hung around her neck. He thought the confinement of the woman symbolized the confinement of a nation and it reminded him of the other countries that have endured such campaigns of persecution. Hearing about the CCP's crime of organ harvesting from living Falun Dafa practitioners, he said, “We shouldn't allow such a thing to happen!”

Alexei, yet another artist, wrote in the guest book that he appreciated being able to see the depictions of the horrendous crimes committed by the CCP and the evilness of communism. He thought the artworks spoke to people's conscience and pointed out a path of perfection and sacred love, and had made his day.

Victoria, a philosophy teacher, said, “I'm shocked by what I saw in the artworks. It's terrible that a spiritual belief is being persecuted like this. It's cruel for the CCP to persecute people who live by Truthfulness-Compassion-Forbearance. As a citizen of the 21st century, we can't allow such things to happen.”

Comments in the Guest Book 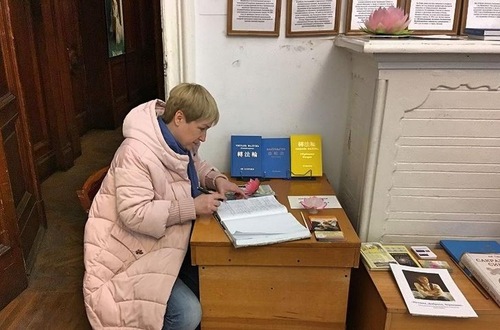 A patron leaves her comment on the signature book.

“Thank you so much,” said one visitor, “for bringing this unique and heart-shaking experience to our city! We hope more people will get to see the exhibition and experience its powerful energy! Our hearts are brightened and warmed by seeing these pictures. I hope the divinities will protect compassionate people!”

Diana, another visitor, said, “This exhibition has made me realize the power and significance of [the principles] Truthfulness-Compassion-Forbearance. I would like to learn Falun Dafa and cultivate.”

Grabovskaya, a professor at the National University of Kiev, wrote that she had learned a lot about Falun Dafa from the artworks and that they had prompted her to reflect on the meaning of Truthfulness-Compassion-Forbearance.

Ileana, a local resident, thanked the organizers for exhibiting such inspiring artworks, particularly in regard to remaining firm in one's belief and fostering harmony in the world.

Alexandra, one of the organizers, said that the exhibition had already been seen in Ukraine's larger cities, which has enabled many people to learn about the persecution of Falun Dafa and be inspired by the artworks. She said, “The exhibition evokes people's compassion and sympathy for innocent people in another country, people they have never met.”