(Minghui.org) Since he was eight years old, Chen Xianqi often pondered the meaning of life in the middle of the night. He wondered why he had come to the world, what was outside of the universe, and whether there were any divine beings. More and more questions came to his mind and left him perplexed even though he read piles of books about the subject in the library. 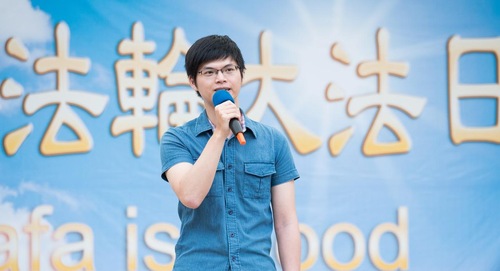 “I graduated from elementary school in 1999. It happened to be when qigong exercises were most popular. I originally planned to learn Tai Chi but found a piece of information about Falun Dafa in the newspaper. My mind became bright when I saw the information. I asked my mom if I could learn it. Mom said, 'No,' right away. Later, I saw a banner about a free Falun Dafa exercise instruction class at my neighbor's house. I was so thrilled and begged my mom to let me learn it. Mom said, 'You ask the divine by casting divination blocks.'”

He did just that three times and got “yes” all three times. The divine agreed! His mom was stunned. He was excited. He learned all five sets of Falun Dafa exercises from his neighbor and borrowed the lecture recordings of Master Li Hongzhi, the founder of Falun Dafa. Recounting his experience, Xianqi said, “I listened to the tapes while doing my homework. I couldn't understand the lectures the first or second time, but after the third time, it suddenly dawned on me that it was a self-cultivation practice! My mind was illuminated! I still feel shaken when I recall that moment!”

The process of learning the Dafa principles was like being reborn. “I felt so fortunate! I couldn't believe I had a predestined relationship with the Buddha Fa. I thought I was the most fortunate person in the world!”

“You aren’t able to get a human body in hundreds of years. It’s taken over 1,000 years for you to get it, and you don’t even know to cherish it. If you reincarnate into a rock you won’t be able to get out of it for 10,000 years, and if that rock isn’t crushed, or if it doesn’t weather away, you’ll never be able to get out. Getting a human body is so hard! If a person can really obtain the Great Law he’s just so fortunate.'” (The Second Talk, Zhuan Falun)

Despite his young age, Xianqi was serious about his cultivation. “During my three years in middle school, I often went to join the Dafa exercise group near my home at five o'clock in the morning and went to school with lots of energy after doing the exercises. As soon as school was over, I would go to a Dafa study group and experience-sharing sessions.” Xianqi applied the Dafa principles of Truthfulness-Compassion-Forbearance in his daily life. He never missed any schoolwork, and his scores remained in the top four of his class.

However, after being admitted to the prestigious Affiliated Senior High School of National Taiwan Normal University, Xianqi fell behind in both cultivation and schoolwork. He worked hard and spent most of his time on coursework, and he was frustrated to find himself among the bottom of his class. His college admission exam scores barely qualified him for National United University in the county of Miaoli.

“My college life was busy every day. I was involved in club activities and had a girlfriend. I didn't study the Fa for weeks or months at a time. I felt a big gap from solid cultivation. Before I knew it, a whole year passed. I felt far, far away from Dafa. I knew that Dafa was good from the bottom of my heart, and my Dafa books were right next to me, but I simply didn't want to touch them. I was in agony and slacking at the same time. I knew I shouldn't miss the chance to cultivate myself, but moving forward was hard. I truly felt I was losing the most precious thing!”

In 2011, while Xianqi was studying for his Master's degree at National Taipei University of Technology, he became abnormally weak. He had to rely on tonics and medicine, and he wore a down coat in the summer to keep himself warm. One of his professors jokingly asked him if he owned a medicine shop after seeing all kinds of pills on his desk. Xianqi couldn't understand why he had become so weak.

One morning, a memory of sitting in meditation flashed in his mind. He felt touched. “Why don't I do the Falun Dafa meditation?” he thought. He started with a half hour with one leg crossed and gradually started meditating for a full hour with both legs crossed. Within two weeks, Xianqi felt as if he were reborn. “The flu was very bad that year. Everyone in my lab got the flu. I was the only who stayed healthy and energetic. They were amazed as I seemed to be a completely different person. I told everyone how great Falun Dafa was. I also brought my classmates to the Falun Dafa exercise group on campus.”

“I visited the group exercise site close to my home again. When I arrived at 4:30 am, the lady I knew was there. She asked me what my name was. I said, 'I'm Xianqi!' She looked at me carefully and remembered me. It had been almost a decade since we did the exercises together. This time, I indeed returned to cultivation!”

How many decades does a person have in life? This time, Xianqi made up his mind to seize every minute to cultivate diligently and catch up.

Xianqi enlisted in the military in September of the same year. Recounting his service, Xianqi couldn't help but gasp at Master's perfect arrangement.

“A senior schoolmate in the military gave me a hard time. He continued to give me trouble until my last day, but I didn't treat him poorly because I knew I was a cultivator. Several times, he gave us laborious tasks like digging a ditch, cutting down a tree, or carrying lumber while he slept in. He also falsified documents to take days off. Many others wanted to report him.

“One night, this senior schoolmate kept talking on the phone loudly while I was trying to sleep. I was exhausted, bothered, and upset. All the bullying he did to me, including his facial expressions and hurtful words, rushed into my mind. I nearly burst into rage. At the moment I was about to lose control of my temper, I suddenly thought of Master. I asked myself if I would be able to truly believe in Master and Dafa. Even though the senior schoolmate was the offender the whole time, would I be able to follow Master's teachings one hundred percent and look within for shortcomings as a cultivator?

“Tears came to my eyes on thinking of Master's teachings. I told myself no matter who was right and who was wrong, I had to follow Master's teachings and look within. I uncovered my resentment and jealousy for the schoolmate. As a cultivator, I should think of others. Something might have happened to his family. He might have raised his voice because he was nervous. As soon as this thought arose, I clearly felt that I was encompassed by a force of compassion, which was so tremendous and all-inclusive that it dissolved my anger.”

There was a talent show at the end-of-year party. Someone suggested that Xianqi demonstrate the Falun Dafa exercises. Xianqi was thrilled to hear about this opportunity. There were seven people in a committee who voted for the program. Three voted to have the exercise demo, while three voted against it. The deciding vote happened to be this senior schoolmate.

“I thought his vote would be negative since he was prejudiced toward me. But he voted yes unexpectedly! We were able to demonstrate the five sets of Falun Dafa exercises on stage in front of three hundred people at the party. Upon hearing Master's powerful voice giving instructions in the music, I was so excited that I almost cried! Many people asked me about Falun Dafa after the party. Some wanted to learn Dafa. The exercise demonstration had a greater effect than I had imagined. The senior schoolmate told me later that he had seen Falun Dafa practitioners' activities at a tourist site and he thought they were kind and magnificent. I was so happy to see his supportive attitude toward Dafa. If I hadn't held on to my compassion that night, he probably wouldn't have voted yes.”

Xianqi started working for the Epoch Times the day after he retired from the military. He hopes to help spread the information of compassion and traditional Chinese values to the whole world through the newspaper.

Having experienced ups and downs in cultivation and returning to the journey to his original, true self, Xianqi said he was deeply grateful for Master's compassionate care. He said, “I hope everyone will be able to read the book Zhuan Falun with a pure mind. When you let go of your notions, you will find what you have been waiting for lifetime after lifetime!”

“How One Prison Warden Carries Out the Persecution of Falun Gong in Shenyang No. 1 Prison”

“Writing Articles for Minghui Is Also Part of Our Cultivation”