(Minghui.org) Today's news from China includes incidents of persecution that took place in 8 cities or counties in 5 provinces, where at least 11 practitioners were recently persecuted for their belief. 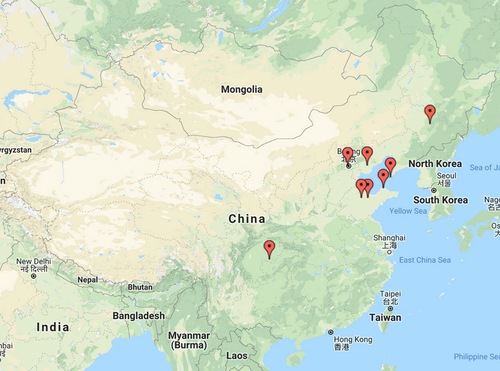 Ms. Qin Xiuzhi and Ms. Qin Guohua were arrested by domestic security officers while distributing Falun Gong informational materials on the morning of February 17, 2019. Their homes were ransacked and Falun Gong books, photos of the founder of Falun Gong, and other materials were confiscated. Both practitioners were taken to the Jilin City Lockup Center.

The police notified both practitioners' families to pick them up on February 27. However, when the family members went to the lockup, the two practitioners were taken to the Jilin Detention Center for further persecution.

Mr. Yuan Shuxin was reported to the authorities for talking to people about Falun Gong on February 26, 2019. He was later arrested and taken to the Renmingguangchang Police Station.

Ms. Jiao Yaling, 69, from the Jianxin South District, Shunyi District, was arrested at home by officers from the Shengli Police Station on the morning of March 1, 2019.

Mu Deyu, deputy head of the Qian'an City Domestic Security Division, and plainclothes officers broke into Ms. Su Jingrong's home in Hezhuang Village, Wuchong'an Township, and arrested her on the morning of March 1, 2019. The officers videotaped her home and confiscated a computer and Falun Gong amulets.

Ms. Su was taken to the domestic security division, where her blood samples and fingerprints were forcibly taken. She was transferred to a detention center, but was not accepted because she failed the physical exam.

Ms. Su was taken to the police station instead. The police called the village officials to pick her up and take her home.

Ms. Chen Jianmei was arrested by officers from the Qidu Police Department on February 21, 2019.

Ms. Yang Shuyu was sentenced to three years in prison and fined 20,000 yuan by the Penglai City Court on September 25, 2018. She was held in the Yantai City Detention Center during her appeal to the Yantai Intermediate Court.

The court upheld the original verdict and Ms. Yang was taken to the Shandong Province Women's Prison on January 22, 2019.

The three practitioners were released on bail that evening.

“Greece: Screenings of “Letter from Masanjia” Sold Out at Documentary Film Festival”

“When We Have No Fear, Master Is Able to Help Us”