Australia: A Family Miraculously Unharmed in a Dangerous Truck Accident

(Minghui.org) On December 3, 2013, a Vietnamese-Australian woman named Kim and three of her family members (all Falun Gong practitioners) were driving along a highway in Australia when they encountered roadwork.

Kim, the driver, began to slow down. She recalled, “My sister suddenly yelled that a large truck was about to hit us from behind. The next thing I knew our van was surrounded by a cloud of dust. I could not see anything in front of us, but heard the loud impact as our van was struck.” 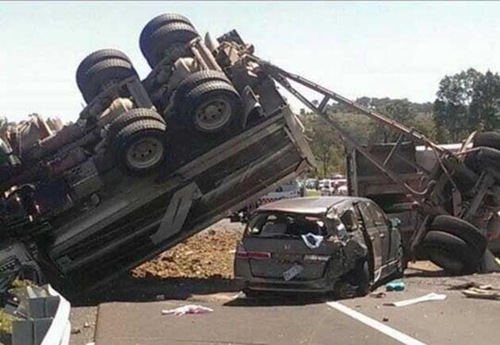 Photo of the accident's aftermath on December 3, 2013. The truck broke into two sections. Despite the damage to the minivan Kim and her family were unharmed.

She continued, “We knew we had to get out, but the top of the van was crushed and we couldn't open the doors. After several attempts, we managed to open one door and climb out.”

When the paramedics arrived they were shocked that no one was injured. The people who witnessed the accident felt it was inconceivable that no one was hurt or killed. Kim recalled that someone said, “This is a miracle!”

Kim explained, “The truck was loaded with several tons of sand and stones. The driver lost control of the truck due to a brake issue. The front of the truck separated from the back and slid past us.

“I knew that Master Li (the founder of Falun Gong) had protected us. I am grateful to him and treasure the opportunity to practice Falun Gong.”

Kim and her family had fled to Australia 40 years ago when the communist army invaded Vietnam.

For years she suffered from illnesses. She said, “Even though I was in my early 20s I had high blood pressure and a severe ulcer. I was in agony, had to lay in bed for days because of the ulcer. I took pain killers, but they did not work.”

She visited many doctors and took various kinds of medicines, but nothing helped. She felt hopeless.

Her sister started practicing Falun Gong in 2000 and recommended it to her.

“I was moved after reading the book Zhuan Falun,” said Kim. “Soon after I began practicing, I felt great. I followed the principles Truthfulness-Compassion-Forbearance in my daily life. Within two months, all the pain was gone.” Since then she has never seen a doctor or taken any medicine.

Raising Awareness at the Chinese Embassy

In 2010, Kim began going to the Chinese Embassy in Canberra to raise awareness about the Chinese Communist Party's (CCP) persecution of Falun Gong. From Monday to Friday she arrives at 7:30 a.m., rain or shine, and holds banners which call for an end to the persecution. 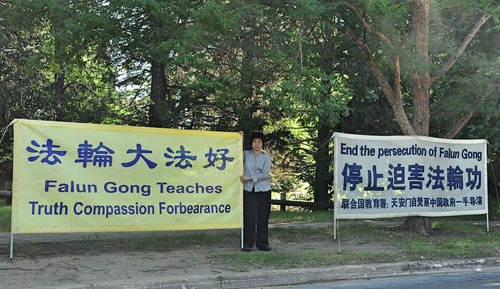 Rain or shine Kim holds a banner at the Chinese Embassy in Canberra to inform people about the persecution.

From her appearance, no one would guess that she is in her 60s. Now, ten members of her three-generation family practice Falun Gong.

“Greece: Screenings of “Letter from Masanjia” Sold Out at Documentary Film Festival”