Blessed for Supporting the Righteous: Greetings from People Who Help to Spread the Truth about Falun Gong

(Minghui.org) “When Falun Gong first started being persecuted in July 1999, no one dared to say anything positive about it. Given the severity of the persecution, I thought Falun Gong could not last longer than a few months. But a few years later, practitioners distributed information about it in our area, including my home. I was so happy to see it!” wrote one retired government officer from Jingzhou County, Hunan Province.

In his letter to Minghui, the officer said that, throughout these years, he had been telling others the facts about Falun Gong, so that they wouldn't be deceived by the communist party hate propaganda. “When they hear how the Party mistreats innocent people like Falun Gong practitioners, many of them have agreed to quit the organizations associated with the Party.”

To celebrate the Chinese New Year, many, many people have sent greetings to Minghui to thank Mr. Li Hongzhi, the founder of Falun Gong, and wish him a Happy New Year. Below are a few examples.

From a Bystander to a Supporter that Helps Distribute Information

The officer mentioned above said he retired from county government in 1999. At that time, he did not know much about Falun Gong. The massive suppression, however, made him believe Falun Gong had been wronged, because he had observed similar situations in previous political campaigns launched by the communist party.

After reading the information practitioners had given him, he was surprised to find out how badly innocent practitioners were mistreated for their belief. A few years later, he was able to circumvent the internet firewall to browse overseas news. He could also watch overseas programs broadcast by NTD Television with a satellite dish. Shocked by the brutality and severity of the persecution, he began to tell others about it.

“I am so glad that more and more people have now learned the facts of Falun Gong. And they no longer want to side with the Party,” he said. Recently, several officers, including some who had belonged to the Party for decades, visited him and asked him to help them quit the Party.

“This Must Be Righteous” 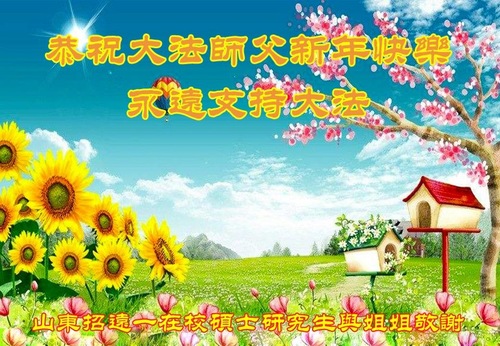 A graduate student from Zhaoyuan City, Shandong Province, submitted a letter written by him and his older sister. “Our mother is a Faun Gong practitioner. She is probably the best person we have ever known, from caring for our family to her kindness towards our neighbors. Many people trust her and respect her,” they wrote.

Their mother told them what she had learned from Falun Gong, such as the values consistent with traditional Chinese culture. The brother and sister agreed with her and, after recognizing how much society has degenerated, they've tried to stay away from bad influences. Although they have not yet practiced Falun Gong, they sincerely support their mother and other practitioners. “It is because we believe this [Falun Gong] must be righteous,” they explained.

The siblings have already been blessed by Falun Gong. The sister is kind and well-liked and has a happy family. The brother improved his grades, went to college, and then to graduate school at a very good university. “We are very fortunate because of Falun Gong, which helps us to be good citizens. We truly thank Master Li and wish him well,” they wrote.

The Rainstorm Will Not Last Long 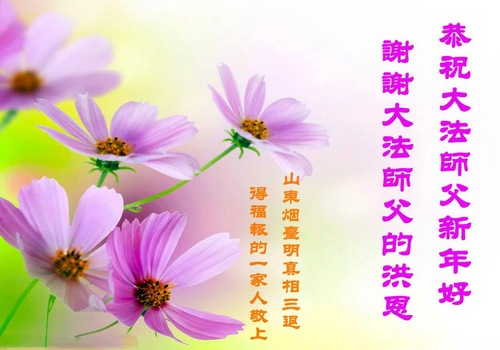 A Yantai City, Shandong Province, resident said both her parents are Falun Gong practitioners. After they started to practice it, they became healthier and more considerate. From her parents, she knew Falun Gong was good and that its practitioners were innocent.

Even after getting married and having a child, she continued to support Falun Gong practitioners. “Over the past nearly 20 years, I have seen my mother get arrested and detained many times. But our family firmly stands with her because practitioners like her are the hope of this chaotic society,” she wrote. “We all know this rainstorm will not last long.”

From time to time she helps her parents, not only with everyday things but also with activities related to Falun Gong. “My family has benefited a lot from it. Our business does well and we now have a bigger house and a new car. My child is also doing very well. People say I am lucky. But I know it is because of Falun Gong.”

She said she agreed with a Chinese saying that good is rewarded with good and evil incurs negative consequences. She hopes more people will help practitioners because they only want to become better citizens.

“A Bright Tomorrow Is Coming” 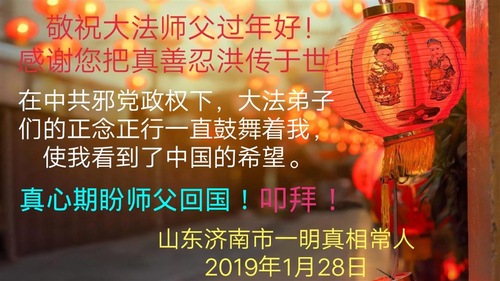 One resident in Jinan, the capital of Shandong Province, said he knew what Falun Gong was many years ago. He often told people about it through chatting and phone text messages. In early 2008, he was even detained for 15 days after the police found he had been sending text messages daily to support Falun Gong for over a year.

“I did that because I really believe in the principles of Truthfulness-Compassion-Forbearance,” he explained. “I think I may not be good enough to become one of them. But I respect practitioners—their belief and their perseverance—and I want to help them.”

Having circumvented the internet firewall, he can read overseas news about Falun Gong. He has also tried to help people to find out about Falun Gong through social media. “I am always inspired by practitioners who risk their lives to counter the communist party hate propaganda,” he wrote.

Despite the ongoing persecution, he said he would continue to support Faun Gong practitioners. “In my mind, I know righteousness will prevail and a bright tomorrow is coming,” he wrote. “Thank you very much, Master Li, and Happy New Year!”