(Minghui.org) Today's news from China includes incidents of persecution that took place in 6 cities or counties in 5 provinces. According to this report, 2 Falun Gong practitioners were subjected to mistreatment during their detention, and at least 5 were illegally arrested. 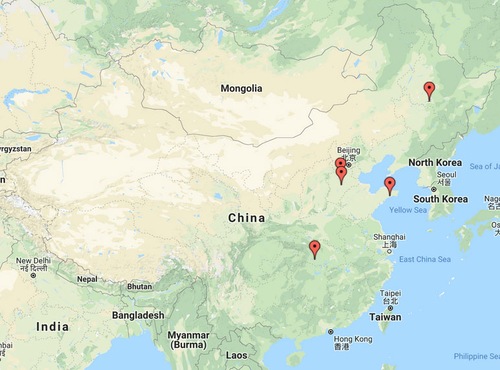 Mr. Yan Jiguo from Yilan County is incarcerated in the No. 3 Ward of Hulan Prison. He is unable to eat as a result of the mistreatment he has been subjected to while in prison.

Mr. Xu Yongqing from Shanghai was sentenced to two years in prison and fined 5000 yuan on September 18, 2018. He appealed, but the Yangzhou Intermediate Court upheld the original verdict on December 21.

Ms. Kong Hongyun was arrested by officers from the Lianchi District Police Department and Hepingli Police Station on January 2, 2019, and held in the Baoding Detention Center.

Four people broke into Ms. Sun Li's home and arrested her on the afternoon of January 9, 2019. They ransacked the place and confiscated a computer and printer.

Later, Liu Yicun, an officer in charge of Falun Gong affairs at the Shenzhou City Police Department, led four other people to her home for a second search. They confiscated some personal belongings.

Ms. Han Chengli, 61, from the Shashi District was reported to the authorities for distributing Falun Gong materials on December 18, 2018. Police officers broke into her home on January 8, 2019, and arrested her. They ransacked the place and confiscated Falun Gong materials.

Ms. Han was taken to the Shashi Detention Center.

Ms. Sui Zhenghua and Mr. Sun Desheng from Yuli Town were arrested on the morning of January 7, 2019, for talking to people about Falun Gong at a farmers' market.

Ms. Sui was released and returned home that afternoon. Mr. Sun's home was ransacked that morning. His whereabouts are unknown.

“A Senior Practitioner: Forging My Own Cultivation Path”

“Blessed for Supporting the Righteous: Greetings from People Who Help to Spread the Truth about Falun Gong”