London: Raising Awareness about the Persecution of Falun Gong in China

(Minghui.org) Falun Gong practitioners from London held activities in Chinatown on February 10, 2019 to raise awareness of the persecution of Falun Gong in China. They displayed posters to expose the cruelty perpetrated against practitioners in China and collected signatures on a petition calling for an end to the persecution. Many people passersby showed their support for the practitioners' efforts and courage. 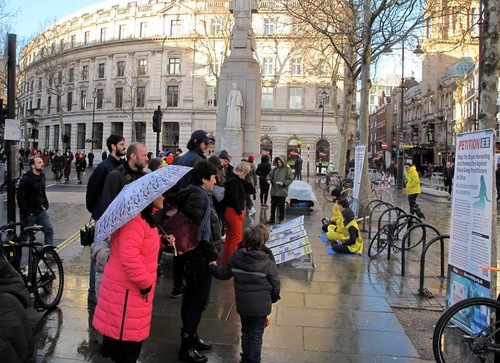 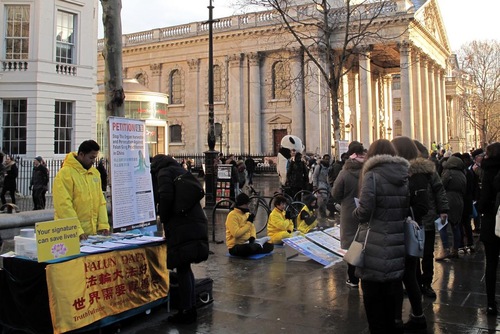 Falun Gong practitioners demonstrate the exercises, told passersby about the persecution in China, and collected signatures of support.

Many people stopped to learn more and signed the petition that called for an end to the persecution. Some commented that the principles of Falun Gong, Truthfulness-Compassion-Forbearance, were the universal values that needed to be protected.

A woman from Vietnam signed the petition and told the practitioners that her mother practices Falun Gong in Vietnam. Therefore, she started reading Zhuan Falun, the main book of Falun Gong teachings. She was excited to establish contact with local practitioners. 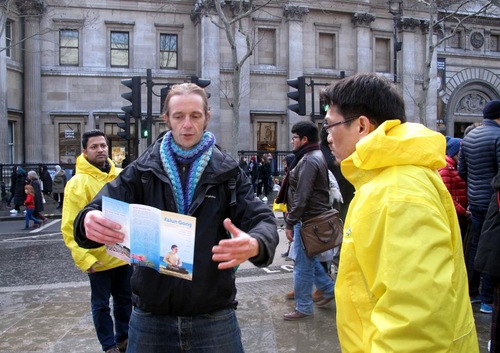 Andrew came across Falun Gong practitioners two years ago, when he signed a petition. He was given a handmade paper lotus flower. He asked for another one, so that he could gift it to a friend. He said that he placed the lotus flower at a place where he could often see it, because he really liked the three characters of Zhen, Shan, Ren (Truthfulness, Compassion, and Forbearance). He said that the meaning of the three characters are very important to him, and that people needed to be truthful and willing to forgive. He also said that the kindness of people in today's society is disappearing and that it is great that Falun Gong promotes it. 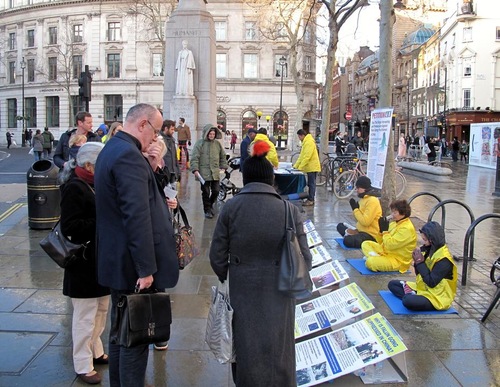 Rene moved from South Africa to work in London. It was the first time she heard about Falun Gong. She thought the postures of practitioners doing the sitting meditation were “beautiful.” She thought highly of the Falun Gong's principles and said that people needed “to be good inside.” She said that no matter what one's belief is, one should be tolerant.

After learning that practitioners in China are tortured because they refuse to give up their belief, Rene said that any dictatorship has always suppressed righteous beliefs throughout history. She signed the petition, and said “I am glad I could sign, I really am.” 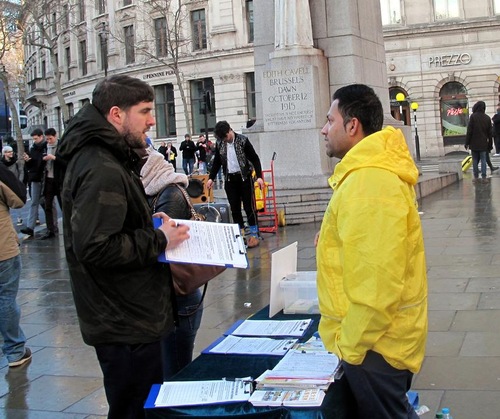 John (left) has recently visited China. After talking to a practitioner, he signed the petition and expressed interest in learning the practice.

John recently visited China with his girlfriend and experienced firsthand the lack of freedom of thought. He said that no matter where they went, the locals told them what the government and police said. He couldn't use social media and outside search engines to verify what he was told. As a result he could only keep silent, which he felt was a shame.

As he looked at the practitioners meditating, he said, “I want to get into this.” The practitioners told him how he could learn free of charge at anyone of the city's many practice sites.