(Minghui.org) Every weekend Falun Gong practitioners throughout Australia hold activities to raise awareness about Falun Gong and the persecution of the practice in communist China. One event venue has been the popular tourist attraction in Sydney, Mrs. Macquarie's Chair. Due to its scenic location overlooking Sydney Harbour many tourists from other countries, including Chinese tourists, visit it.

The practitioners distribute information about Falun Gong, demonstrate the exercises, and encourage Chinese tourists to renounce the Chinese Communist Party (CCP) and its affiliated organizations. 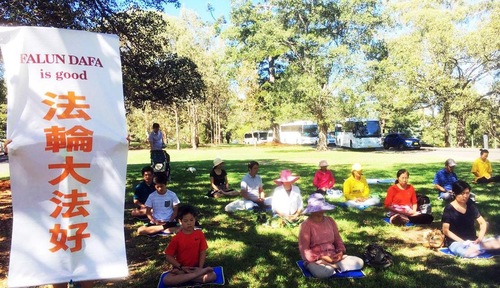 Because the practice is being persecuted in China, many Chinese tourists came to watch the exercise demonstration. They read the materials and talked with practitioners. When one tourist said that he had seen Falun Gong practitioners in Hong Kong, a practitioner asked if he had quit the CCP yet. She explained that the practitioners were there to answer questions and dispel any misunderstandings people had as result of the Party's propaganda against it.

The man immediately said that he wished to quit the Communist Youth League and the Young Pioneers.

When another Chinese tourist said that he could not take the Falun Gong informational materials back to China, a practitioner said, “You can download software from The Epoch Times website to get around the Party's censorship,” and she gave him the information. The man was very pleased and thanked her. 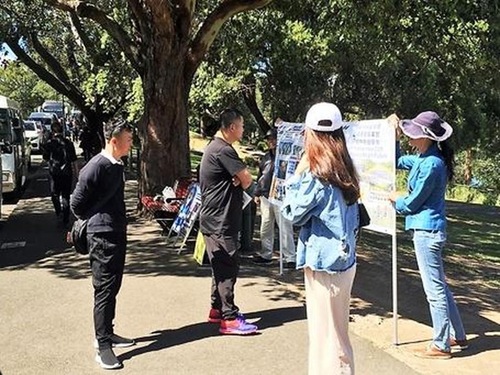 Chinese tourists read information about Falun Gong and the persecution.

One man told practitioners he was a scientist and said, “I'm an atheist and I don't believe in spirituality. I'm a professor at a well-known university in Beijing. I'm also in charge of a research institute. My wife is my colleague. I'm also the chief executive officer of a company. What can you say to convince me?”

A practitioner told him, “Famous scientists like Newton and Einstein believed in religion, why? They knew that only Gods could explain the complexities of the universe. Falun Gong is practiced in more than 100 countries worldwide. Many people who practice it are scientists. Many national leaders practice, as well as people of several ethnic groups.

She showed him a photo and explained, “These Chinese characters naturally formed on a rock which is 270 million years old. It was found in Pingtang County, Guizhou Province. The characters are, 'The Chinese Communist Party is disintegrated.'”

She said, “You're a scientist. Think about it. Why did that message appear on the rock?”

The man was surprised and excited. When the practitioner offered to help them quit their membership in the CCP and its affiliated organizations, they immediately agreed.

“Returning to Goodness Through Cultivation”

“London: Raising Awareness about the Persecution of Falun Gong in China”