(Minghui.org) On the hottest day in 130 years in Adelaide, Australia, local residents still chose to attend a free instruction class to learn the Falun Gong exercises.

The temperature in Adelaide soared to 115.9°F (46.6°C) on Sunday, January 24, 2019. Despite the scorching heat, more than 20 people made it to the Thebaton Community Center, where practitioners assisted them in learning the Falun Gong exercises. As the attendees followed the instructional video to learn the movements, many reported experiencing a peaceful feeling that came from within.

Falun Gong is an ancient Chinese qigong practice with five sets of exercises and great health benefits. Practitioners aspire to follow the principles of Truthfulness-Compassion-Forbearance in their daily lives to be better people. In China, practitioners have been persecuted severely for the last two decades for their faith. 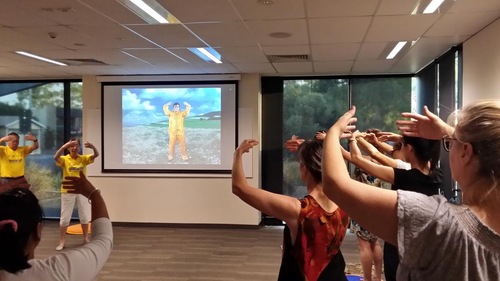 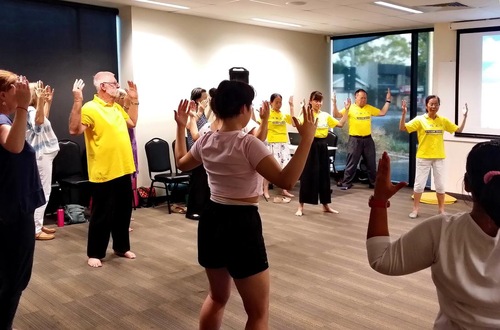 Local residents learn the second exercise of Falun Gong at the Thebaton Community Center in Adelaide, Australia, on Sunday, January 24, 2019. 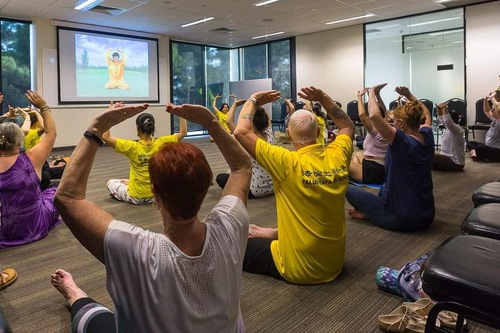 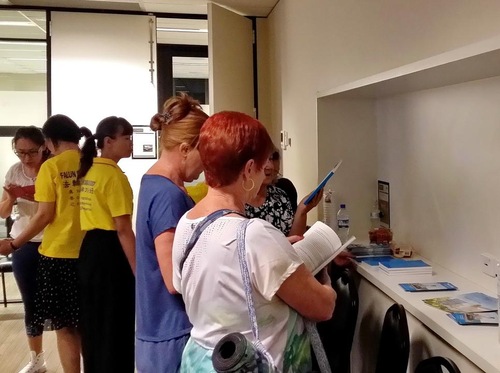 Local residents read about the principles of the exercises.

Edwina told practitioners that she had learned about the Chinese communist regime’s persecution of Falun Gong online. Because she wanted to know more about the practice, she decided to come to the class.

“I am very grateful that practitioners still give free lessons on the exercises despite the extreme heat. I felt great after doing the exercises. I will continue to learn more about the principles of the exercises,” Edwina said. 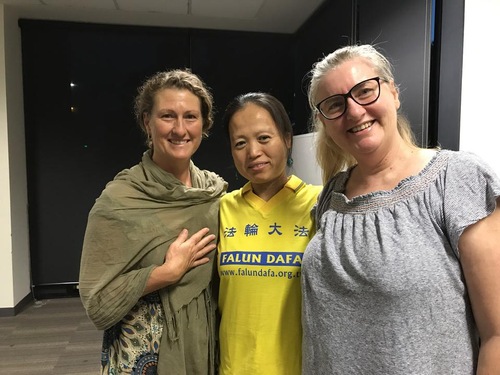 Tracy enjoys meditation on a regular basis and was happy to find out about the exercise instruction session on Facebook the day before.

“I had never heard of Falun Gong before, but something in me was so attracted to it, like it was what I had been looking for. So I was very curious,” she said.

Tracy said she could feel a comforting and peaceful energy as she did the exercises. “I very much believe in the existence of energy fields,” she said, “The energy fields around us affect us physically and mentally.”

Tracy said she wanted to cultivate kindness because she knows that is best for her health. She liked Falun Gong because the movements were simple and the energy was strong. She has practiced Tai Chi, yoga, and qigong because she liked to have good energy. “I felt great today. The movements are simple, and they carry peaceful energy. I will keep coming,” she said.

A friend of Tracy’s had told her that Falun Gong is being persecuted in China, which saddened Tracy. “It’s hard for people in Australia to imagine not having the freedom to be healthy and that people are persecuted for the freedom they are supposed to have,” she said.

Byambasuren was from Mongolia. She told practitioners that she had problems with her legs but still took buses for an hour and a half to come and learn the exercises.

“Though it took me a long time on the buses, I was very excited thinking that I was finally going to be able to learn the Falun Gong exercises,” she said, “I will continue doing the exercises every Saturday with other practitioners on Victoria Square.”