Taiwan: "If You Find Falun Gong You Won't Be Lost"

(Minghui.org) Falun Gong practitioners have long set up shop at the park at Sun Yat-sen Memorial Hall. Tourists from around the world flock there, where they have a chance to encounter practitioners and learn the truth of the persecution in China. The following are some experiences of practitioners who frequent the site. 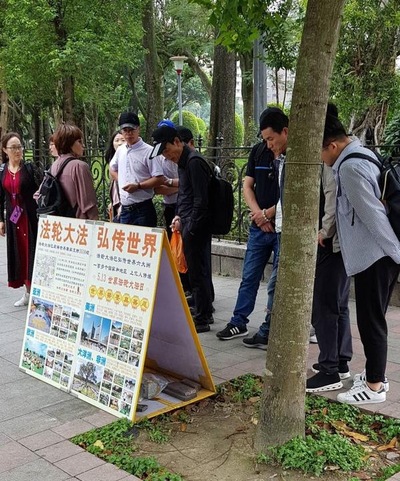 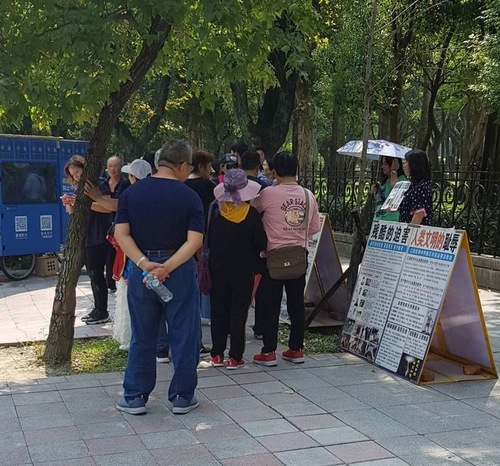 Visitors learn about Falun Gong and the persecution in China

“If you find Falun Gong, you won't be lost”

A middle-aged man stopped to talk to a practitioner, “Falun Gong is terrific. I am on your side. You have been opposing the communist tyranny for decades. It’s amazing!”

The man was also frustrated by the Chinese communist regime’s violence against protesters in Hong Kong, “The Communist Party is so bad, so evil. Even with the entire world watching, they open fire on Hong Kong protesters. I have been criticizing (the Communist Party) on Facebook. You should not give in to tyranny!”

“The Communist Party is wrong to forbid people to have faith”

An elderly man from China’s Qinghai Province was smoking a cigarette near the site. A practitioner offered him a flier, but he appeared scared and didn't accept it. He looked at the display boards from a distance for a while and said, “It’s not just Taiwan that has Falun Gong; there are a lot of Falun Gong (practitioners) in our area, too. It’s not a small number, but they can't come out to practice openly.”

A practitioner said to him, “The Chinese constitution is said to protect people's legal right to practice their faith. Do you understand why the Communist Party doesn't allow people to practice Falun Gong?”

The elderly man closed his eyes and pondered on it. He then opened his eyes and said loudly, “The Communist Party is wrong for not allowing people to have faith. It is indeed wrong!”

Three young men from Guangxi Province read through every display board exposing the fabricated Tiananmen self-immolation incident. A practitioner followed up with them. Afterward, one man said, “I am seeing this for the first time and I am sad. We wouldn't have known this if we hadn't come abroad.”

Four international students from mainland China also listened attentively beside them. One of them suddenly smiled and said, “I came to Taiwan to study traditional culture. I didn’t expect to learn about this. It’s valuable and a big win for today!”

A tour guide told a practitioner that his cousin works at a police department in China. The cousin told him that Falun Gong was once very popular in China with more than 100 million practitioners before the persecution started.

“Falun Dafa Has Transformed My Life!”