(Minghui.org) Today's news from China includes incidents of persecution that took place in 11 cities or counties in 5 provinces, where at least 15 practitioners were recently persecuted for their belief. 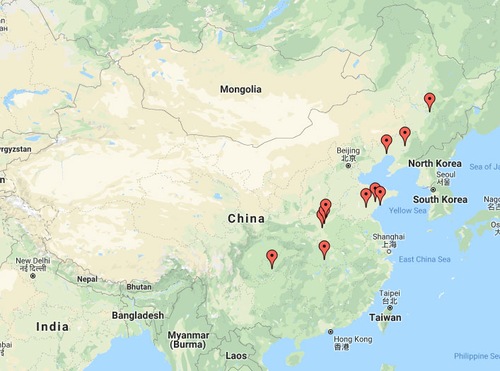 Ms. Liu Wenhuan and Ms. Feng Lixia from the Longxing Neighborhood, Taihe District, were arrested on August 7, 2019, for talking to people about Falun Gong at Bajiaotai Farmers' Market. They were both sentenced to 18-month prison terms, which are currently being served outside prison.

Officers from the Taihe Domestic Security Division broke into Ms. Wei Fuzhen’s home and arrested her on the morning of August 21. Ms. Wei works at Jinzhou Power Plant. She was sentenced to an 18-month prison term by the Taihe Court.

Ms. Wu Xiulan, 74, was sentenced to a three-year prison term by the Linghe District Court. She appealed, but the Jinzhou City Intermediate Court upheld the original verdict.

Ms. Hou Yinglian was tried at the Xuchang City Detention Center by Director Chen Jianwei of the Criminal Tribunal of the Weidu District Court and others on June 26, 2019. She was sentenced to a four-year prison term in September.

Mr. Li Xu’an and Mr. Zhou Shen were arrested by police officers, who were waiting for them at a bus station in front of Xuezhuang Farmers' Market, on November 30, 2019.

Mr. Li was released the following day because he had high blood pressure. Mr. Zhou was taken to the Baofeng County Detention Center.

Four officers from the Xiguan Police Station broke into Ms. Zan Ruilian’s home and ransacked it on November 27, 2019. She was taken to the police station and forcibly had her photo taken.

Ms. Zan was taken to the Liquan Neighborhood Brainwashing Center.

Mr. Mao Yiqiang was arrested by officers from the Qianjiang Jianghan Oilfield Police Department. He was officially placed under arrest by the Xiantao Procuratorate on November 22, 2019.

Participant in the persecution of Mr. Mao:Liang Yu (梁钰), officer in charge of the case, Qianjiang Jianghan Oilfield Police Station: +86-19972171262

Ms. Wang Lina went out to pick up an express courier delivery, but never returned. Her home was ransacked that evening. Her two young children were left alone at home.

Ms. Yin Xiuping has been arrested.

Ms. Zhang Shengyan from Yaodianzi Village, Yuandongtou Town, was arrested by officers from the Yaodianzi Police Station on December 5, 2019. Her home was ransacked.

Plainclothes officers ransacked Ms. Huang Baiqiong’s home in the Yubei District on the morning of September 17, 2019. Her Falun Gong books, photos of Falun Gong's founder, and an MP3 were confiscated.

Ms. Huang saw the police as she was returning home from grocery shopping, and managed to avoid being arrested.

Mr. Zhang Tianpeng was arrested at home by Director Liu of the Huancheng Police Station and officer Niu at around 10:00 a.m. on December 4, 2019. The officers confiscated his Falun Gong books.

Mr. Zhang was taken to the Yushu City Police Department and held there for five days.

Mr. Tong Haibo was arrested on December 9, 2019, and detained for seven days.