(Minghui.org) Falun Gong practitioners participated in an all-day group Fa study and experience sharing session in Chiayi, Taiwan, on Sunday, December 15, 2019. They discussed things that they have experienced and learned while practicing their spiritual belief. They also had their photo taken as a group outside the venue to express their gratitude to Master Li, the founder of Falun Gong, for his salvation and to wish him a happy New Year. 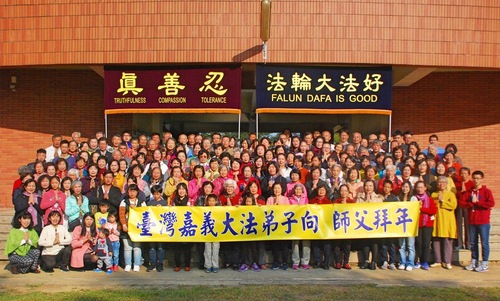 Practitioners who participated in the Fa study and experience sharing have a photo outside the venue. The banner in the front reads, “Dafa disciples in Taiwan's Chiayi send New Year's greetings to Master.”

Passing a Tribulation by Improving Character

Lin You-chuan started practicing Falun Gong in 2005. He said that the conflicts and tribulations he has encountered on his cultivation path have helped him dissolve his karma and improve his character.

“I had poor health before practicing Falun Gong. I would catch a cold easily,” he recalled.

He shared how he passed a sickness karma tribulation early on in his practice. More than a decade ago, he had suffered from diarrhea for five years straight, and he had lost 20 pounds. “It's hard to describe how miserable I felt,” he said.

His sister reminded him how karma elimination works in the practice of Falun Gong and that for his body's state to improve, he would need to improve himself fundamentally.

“It took a stick warning before I enlightened that I needed to improve my character. And sure enough, after my character improved I was able to pass the test,” he said.

Chen Meng-chun has practiced Falun Gong for six years. Before she retired, she had been the principal of an elementary school. Her health had been pretty bad before she started practicing, but she became healthy after practicing Falun Gong. She has not needed to use her health insurance card in six years.

“Master taught us that when we encounter something, we should first look inside and think about where we are wrong, our shortcomings, and the situation can resolve itself completely. We shouldn't look outside, at others. We need to adhere to Master's teachings and put others ahead of ourselves and be considerate of others.”

“I learned about the true meaning of life in Falun Gong,” she said. “Questions that had perplexed me for years were all answered.”

She recalled an amazing experience she had when she had been practicing Falun Gong for about two years. She was driving her car one day when she collided with another vehicle. Her jeep flipped full circle in the air, fell in a ditch, and then hit a concrete wall. Her vehicle was wrecked.

“I was not hurt in the accident,” she exclaimed. “I came to know it was an accident after I woke up. Master saved me.”

She wished the world’s people could all read Zhuan Falun, the main book of Falun Gong, so that everyone could also benefit from the practice like she has.

Study the Fa Well and Walk Righteously the Path of Cultivation

Zheng Ruilai has practiced Falun Gong for 16 years. He runs a glass interior design business and has worked in this profession for 51 years. He obtained the Fa after seeing practitioners doing the exercises together at a school. He remembered feeling that Falun Gong was something he had been searching for his entire life.

He said before he practiced, he found it impossible to be honest with clients and suppliers while doing business. “After starting to cultivate, I used kindness, and gradually I could do it successfully.”

He enlightened that he must study the Fa well and increase the intensity of doing the exercises so that he can walk the remainder of his cultivation path righteously.

“From Hopelessness to Blessings: a Doctor Experiences the Power of Dafa”

“Woman Given 1.5 Years for Her Faith in Falun Gong, Never-before-mentioned Witness Included in Judgment of Conviction”