(Minghui.org) Falun Gong practitioners in Hiroshima participated in the Peace & Love Festival in the city's Central Park on October 27, 2019. Practitioners demonstrated the Falun Gong exercises on stage during the event and also taught people the exercises one-on-one. Many people took the opportunity to learn more about Falun Gong.

Falun Gong practitioners demonstrate the exercises at the Peace & Love Festival in Hiroshima.

Festival visitors stop by to learn about Falun Gong.

A practitioner introduces Falun Gong to a festival attendee.

A display banner explains Falun Gong's spread around the world and the practice's peaceful resistance to the Chinese Communist Party's (CCP) persecution.

Signature collection calls for an end to the CCP's persecution. 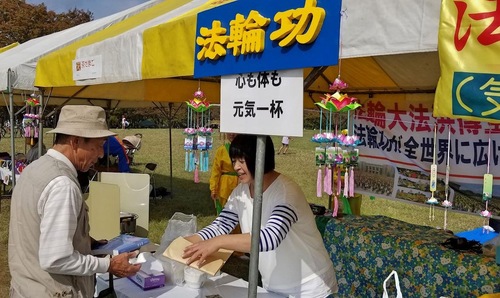 Local resident Mr. Kamei had learned the Falun Gong exercises the previous Sunday. He came to the Falun Gong information booth at the festival to buy the main book of the teachings, Zhuan Falun, and said that he wanted to continue learning the practice. 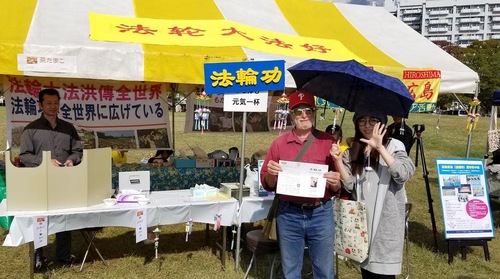 A retired professor from Hiroshima University and his wife enjoyed watching the Falun Gong exercises.

An American professor, who retired after 30 years of teaching at Hiroshima University, and his wife wanted to learn more about Falun Gong after watching practitioners' exercise demonstration. They said they very much enjoyed the demonstration and encouraged practitioners to keep up their great work. 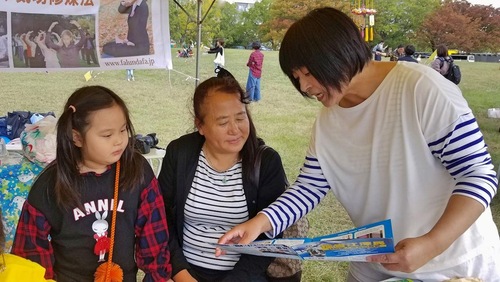 A Chinese woman (middle) decides to quit the Young Pioneers, a communist organization for children in China, which she joined while in elementary school.

A schoolteacher tells her students about the Falun Gong banner.

For more than 10 years, practitioners have had the opportunity to tell an increasing number of visitors to Peace Park about Falun Gong.

“Hebei Man’s Health Ruined While Detained for His Faith, Dies After Years of Police Harassment”

““These Pamphlets Are For Telling People the Truth””