(Minghui.org) Today's news from China includes incidents of persecution that took place in 12 cities or counties in 7 provinces, where at least 22 practitioners were recently persecuted for their belief. 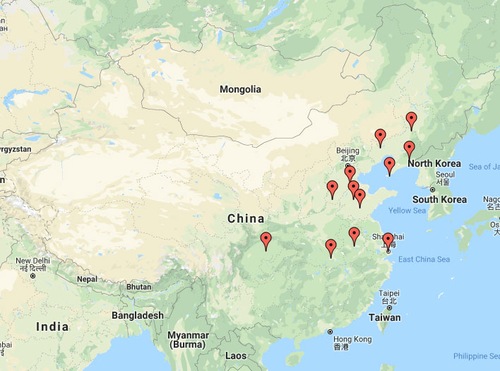 Mr. Wang Jianxin was arrested by officers from the Pudong Domestic Security Division on October 17, 2019. His home was ransacked, and he was detained for five days.

Mr. Jiao Chong, his sister Ms. Jiao Ling, and his niece Ms. Li Zhuo were arrested by officers from the Pingnan Police station on August 11, 2019. His home was ransacked.

Officers from the Xiangyang Police Department broke in to Ms. Wang Yumei’s home in Xidayingzi Town in the Longcheng District on the morning of October 16, 2019. They confiscated Falun Gong books, a picture of Falun Gong's founder, and other personal belongings.

Ms. Liu Xia, 50, from Dalian City, was arrested out of town and taken to the Dalian Detention Center on June 14, 2019. Her husband was arrested later and held for ten days in administrative detention. The police are trying to bring charges against Ms. Liu.

There is another Ms. Liu Xia in Dalian City. She is in her 60s and has been arrested multiple times before for her belief. She was last arrested in Tangshan City on April 1, 2016 and sentenced to nine years in prison.

Ms. Chen Xiang from Yangjia Village, Liujiahe Town was reported to the police by the village security director. Ms. Chen was arrested on October 18, 2019.

Mr. Zhang Guangbao from the Weizhuang Dentist Clinic was arrested by officers from the Guan County Domestic Security Division on the evening of October 18, 2019. He is being held in Guan County.

Ms. Zhang Xuemei is due to be tried on October 22, 2019, by the Yunhe District Court in Cangzhou City. She has been held in the Cangzhou Detention Center for over six months.

Ms. Yang Shuying from Gaoguanzhai in the Zhangqiu District was arrested in August 2019 for talking to people about the persecution of Falun Gong. She was held in the Jinan City Detention Center for 12 days. Officers from the Gaoguanzhai Police Station repeatedly harassed her at home after her release.

Kui Hongbo from the Zhangqiu Domestic Security Division and several officers from the Shuangshan No. 1 Police Station raided Mr. Meng Jun’s home on the afternoon of September 29. They confiscated his Falun Gong books. He was taken to the police station and later transferred to the Jinan Detention Center for 15 days.

Mr. Zhou Zhiqing and his wife from Liuzhuang Village in Yaoxu Town, Mr. Liu Naifu, and a practitioner from Baojiazhuang were arrested on October 16, 2019.

Ms. Liu Jing and her daughter from the Yangluo area were arrested by two plainclothes officers stationed outside of their apartment in the Jianghan District on October 16, 2019. Their whereabouts are unknown.

Ms. Yao Chaofang, 63, from Huichun Town, was arrested at home by Luo Dongguo, Hu Shuai, Liu Xing and officers from the Tumen Town Police Station on April 25, 2019. Her Falun Gong books and paper currency with Falun Gong messages printed on them were confiscated.

Ms. Yao was taken to the Shunqing District Detention Center in Nanchong City.

“Overcoming Life-and-Death Trials and Helping Others”