(Minghui.org) Today's news from China includes incidents of persecution that took place in 11 cities or counties in 8 provinces, where at least 19 practitioners were recently persecuted for their belief. 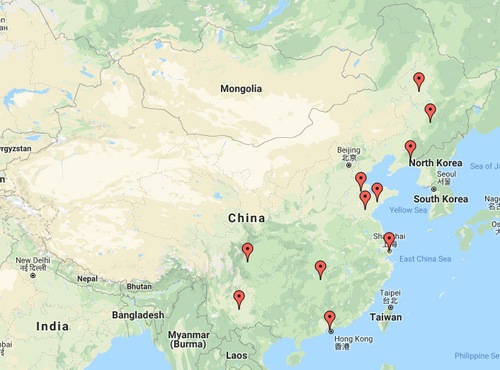 Mr. Chai Maorong was arrested on April 12, 2019. He has been held in the Guandu District Detention Center for over six months and was tried in the Wuhua District Court on October 18.

Ms. Song Liqin and Mr. Gong Jiantao were arrested separately on September 11, 2019. Their families were notified on October 16 that both practitioners had been officially placed under arrest by the High-tech Development Zone Procuratorate that day.

Ms. Tian Biqing, 68, from the Futian District has been harassed twice this year by Yuandong Residential Community personnel. She was arrested by officers from the Tongxinling Police Station on August 28, 2019. She was officially placed under arrest by the Nanshan Procuratorate on October 3 and is being held in the Futian Detention Center.

Zhong Conghai, political head of the Shuangji Airport Police Station, and over a dozen officers arrested Mr. Tong Weiguo and Mr. Wang Guisuo on August 17, 2019. Their homes were ransacked and Falun Dafa books and computers were confiscated. Both practitioners are being held in the Jilin City Detention Center.

Ms. Jiang Fengli from Baoshan Town was arrested by seven or eight officers on October 14, 2019. She is being held in the Dandong Detention Center.

Four officers from the Fengshan Police Department broke into Mr. Wang Shuqing’s home and arrested him on the morning of October 18. They ransacked the place and confiscated a copy of Zhuan Falun and several articles written by the founder of Falun Gong. Mr. Wang is being held in the Dandong Detention Center.

Ms. Liu Rulan, around 60, was arrested at work by Zhongyun Police Station officers on the afternoon of October 15, 2019. They confiscated Falun Dafa books and materials. Ms. Liu was taken to Pudong Prison. Her mentally disabled son was left unattended at home.

Ms. Song Bingmei was arrested at home on October 15, 2019. She was taken to a detention center but was released due to her high blood pressure.

Ms. Wei Junhua was followed and arrested by plainclothes officers from the Dudian Development Zone when she was distributing Falun Gong materials. Her home was ransacked.

Ms. Chen Jianxia, 54, was arrested by officers from the Chaling County Domestic Security Division on September 26, 2019. She was detained for ten days. Her younger brother Mr. Chen Jianzhong was tortured to death in Xinkaipu Forced Labor Camp in 2007.

Ms. Mao, in her late 70s, from the Yihejiayuan area in the Yuhua District was reported to the authorities in late September 2019 for talking to people about Falun Gong. She was arrested, but her family took her home on the day of her arrest.

Ms. Fu Jingying, 72, from Taoyuan County was arrested by officers from the Zuojiatang Police Station in the Yuhua District on October 11. She is being held in the Changsha City No. 4 Detention Center.

Officers from the Qinglong Police Station in Pengshan City broke into Mr. Hu Yugen’s home and ransacked it on October 17, 2019. They confiscated two audio players.

Mr. Hu has been repeatedly harassed by the Qinglong Town police and judicial personnel.

“Senior Practitioners Should Treasure the Time Extended for Their Cultivation”