(Minghui.org) Today's news from China includes incidents of persecution that took place in 6 cities or counties in 5 provinces，where at least 6 practitioners were recently persecuted for their belief. 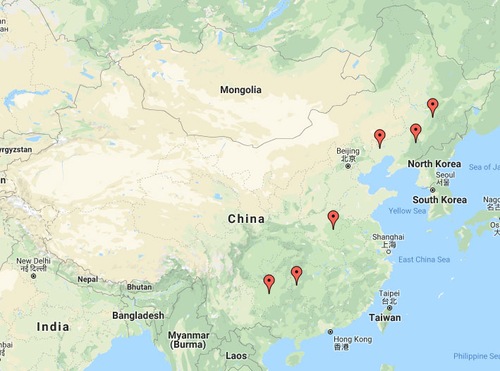 Ms Wang Ruimei, 81, was arrested on September 30, 2019. Officers from the Beicheng Police Station climbed over her neighbor's wall, entered Ms Wang's home and ransacked the place. Ms Wang was pushed to the ground and then carried to a police car, without letting her put her shoes on.

Ms. Wang was forced to give her fingerprints at the police station. She was sent home later that afternoon.

Ms. Hao Yingjun was arrested by officers from the Railway Police Station on the evening of November 4, 2019, when she was to take the train to Shenyang City.

She was taken to Fushun Detention Center for five days.

Mr. Pan Yufeng was arrested at home by officers from Beita Police Department on the afternoon of November 5, 2019. He is being held in Chaoyang City Detention Center.

Mr. Deng Guoxing, in his 60s, from Baicha Village, Yaoji Township, was reported to the police in mid-August 2019, for talking to people about Falun Gong. He was arrested and taken to Shangshui County Lockup Center for 15 days.

Mr. Deng was later transferred to Shangshui City Detention Center. He went on a hunger strike during his detention, and was forced-fed.

Ms. Wang Zhurong was surrounded by many officers, including Zhang Hua, deputy head of Hecheng District Domestic Security Division, and arrested on the morning of September 24, 2019, when she was distributing informational materials about Falun Gong.

Ms. Wang was taken to Chengzhong Police Station, where she was interrogated, photographed, and had her fingerprints taken. She was later transferred to Huaihua Detention Center for ten days.

Mr. Jiang He was arrested for talking to people about Falun Gong. His whereabouts are unknown.

“My Husband Is Blessed After Learning Falun Dafa”